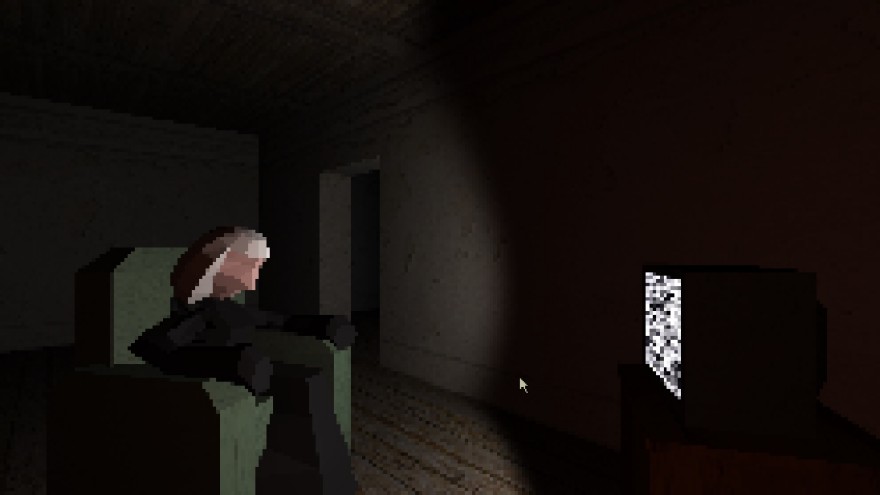 Further cementing herself as an architecture goddess, Kitty Horrorshow has publicly released a collection of three games and a flash-fiction story called Haunted Cities. These were all projects originally made as exclusive rewards for those backing her on Patreon for $5 a month, the deal being that you get one of Horrorshow’s virtual worlds a month for the subscription—these four were released across November 2015 to February 2016.

If you’re familiar with Horrorshow then your expectations for Haunted Cities shouldn’t be amiss. These are lo-fi videogames that prioritize looming architecture and eerie synth work over everything else. Rather than offering, say, puzzles or enemies to shoot, instead the focus is upon the timbre of the virtual space. The idea that permeates is that these places exist for you to wander inside them for a short while, for you to do nothing but feel out topography, at most perhaps you’ll uncover evidence of life that dwelled there before you arrived. This goes some way to explain why every entry in this collection feels like a cross-section of a dreamworld—you are given a slice of a timeline and have to fill out the rest yourself.

“Leechbowl” is the most evident of this. It seems to have been built upon the singular idea of “an abandoned midwestern factory town” that was once filled with people (perhaps leeches?) obsessed with blood. Inside a bar, inside a farmhouse, even a convenience store, always at arm’s reach is a bottle of gore. It’s telling that it is displayed and sold without a label upon its clear plastic bottle, as there is no need to label it, as blood is the only commodity available in this industrial shanty town of corrugated iron and transmission towers.

It’s clear that the occupants of this town drunk the blood, as a poster behind a bar reads “Everything tastes better with blood,” and countless others allude to penetrating skin and supping on the plasma beneath (one of them even features a cartoon mosquito). Your role, however, is not to drink, but to throw these bottles of blood at the exterior walls of the buildings. A select few walls have messages written across them that are revealed when blood soaks them. And as if often the case with Horrorshow’s games, the writing here is chilling, effectively short and evocative in its threats—nightmares of teeth and blood lust.

it is there not to be explained, but to raise goosebumps

“Grandmother” breaks what has become something of an expectation in Horrorshow’s games: there is a living, breathing person. Until now, none of her games have depicted a human body. That is, outside of the recurring theme of architecture as a metaphorical representation of the body, and sentences that describe unseen bodies in various forms and strains. Here, you can walk into a darkened hut, and sat in a comfy chair illumined by the static light of a television is the titular grandmother. Her body moves with her breath, but she does nothing else, not even if you turn the television off to plunge her and yourself in absolute darkness. The rest of the game space comprises a thick forest in which the only landmarks to help guide you are dirt paths, lamp posts, a barn, and a convulsing pillar of dirt that stretches from the ground and beyond your vertical sight. What it’s doing there is a mystery. And as with everything else you can find, it is there not to be explained, but to raise goosebumps and stop you in your saunter.

The other two entries in this collection are “Pente,” which has you visiting a historic floating shrine—where you can enter an empty cathedral and walk by huge swords—and the flash-fiction story “Circadia,” which is “about a girl trying to cure a cassette tape’s infection.” Both of them cannot be mistaken for anything else than the terror-stricken fiction of Horrorshow, each concerned with an individual that has to deal with pain realized through media: in “Pente” it’s a digital world that contains memories of suffering; while in “Circadia” it’s a battle with a cassette tape.

You can download Haunted Cities over on itch.io. You can also support Kitty Horrorshow over on Patreon.