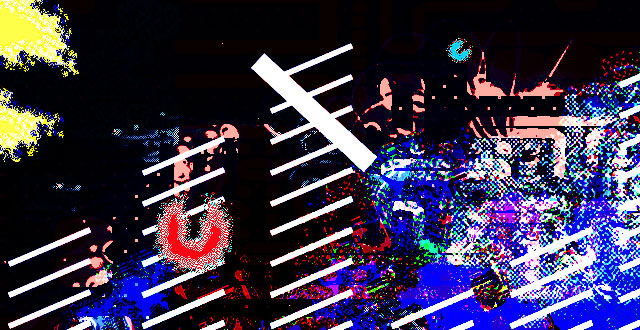 Pong, created in 1972 and one of the first arcade videogames, displays two white rectangles and one white square on a black background. These simple geometric structures represent a game of endless complexity, one that is also an ever-changing abstract image whose composition depends on where the ball goes and where the players move their paddles. It’s an elegant abstraction that visual artists can appreciate. Pong solves many of the conceptual problems faced by abstract artists in the 1920s and ’30s, using many of the same approaches, but for a very different end.

Thinking back to the likes of Pong and Asteroid, the earliest videogames weren’t exactly known for their detailed graphics. The limitations of early programming and equipment restricted most of the games to a palette of white squares (pixels) on black backgrounds, a combination of positive and negative space. Yet what these videogames did incredibly well was to make these combinations of geometric shapes visually engaging and dynamic, just as painters had attempted in the first half of the 20th century.

When abstraction began in art history is an ongoing debate, but it is fairly clear when nonobjective, or completely abstract, art established itself in the Western world. By the early 20th century, painters had ditched recognizable subjects to concentrate purely on the relationships between colors, shapes, lines, and forms on the canvas. Wassily Kandinsky‘s abstractions took on the quality of music; the artist filled his surfaces with varying shapes and colors that created their own dynamic visual rhythms. Dutch painter Piet Mondrian‘s mature work employed black lines and solid, colored geometric shapes, but the subtlety of Mondrian’s delicately balanced images made them entrancing.

The Russian Constructivists found a similar path, though their version of nonobjectivism worked between the poles of Kandinsky’s loose improvisations and Mondrian’s severe simplicity. Kazimir Malevich‘s career began with cubistic images of village scenes and peasants, but his mature work dove into a realm of purely interlocking planes and colored surfaces. Among his most iconic, and hotly debated, works is Black Square on White Ground (1913), a pure white background with a single black square in the center, representing the endless space created by a two-dimensional plane. Videogame fans should be able to appreciate it: Think of the painting as a close-up of a single pixel of Pong, but 60 years earlier.

By limiting themselves to shapes and lines, nonobjective artists presaged modern technology—confronting and solving the issue of how to make an abstract two-dimensional surface visually engaging. Early videogames similarly make use of abstraction as a visual advantage rather than a crutch. Their ever-shifting surface layers have a dynamism that would be the envy of Mondrian or Kandinsky. Yet videogames also remain functional objects, using interactivity and narrative to heighten the experience of the visual abstraction.

These games and canvases are tied together at the surface. Both media play out on two-dimensional surfaces, and make no pretense at three-dimensional space. This gives emphasis to a nonobjective idea of composition—abstract gestures on a unified plane.

Take Pac-Man, for example. The game might seem visually simple, but in reality, its surface is an ever-changing dance of colors and shapes that never stay still. Multicolored ghosts vibrate back and forth, changing direction and orientation. White dots provide a consistent visual rhythm. The blue tubing that frames Pac-Man’s environment creates an underlying architectural structure for these dynamic abstractions. Really, the game is a wonder of visual complexity. Standing in front of a nonobjective Kandinsky painting or Mondrian’s Broadway Boogie Woogie can provide the same visual dance: Vibrations between different shapes and colors create unique visual relationships, in the same way that Pac-Man’s spherical form relates to the contrasting silhouettes of ghosts and echoing of circular dots.

The same deconstructive visual process goes into both viewing experiences. In Pac-Man, the players have the ability to control their own abstraction, while in viewing a painting one is at the mercy of the artist. It’s an interesting distinction, because I think it leads to the idea that game designers could do more to confront players with the abstraction of the games we play. Visual artists make no bones about paring down their medium to its simplest parts, and yet many mainstream designers today seem afraid to shy away from the latest photorealistic innovation in graphics processing.

Visual artists chose to limit themselves to abstraction, while early game designers were forced to by their own resource limits. Now that game designers have the ability to create photorealism, there hasn’t been the same effort to create a visually dynamic surface. Yet games like thatgamecompany’s flOw and Mark Essen’s Jetpack Basketball aren’t afraid to confront abstraction, creating visual environments that are, if anything, more engaging than another first-person shooter. Designers shouldn’t shy away from nonobjectivism; after all, it’s their heritage. And who’s afraid of red, yellow and blue?