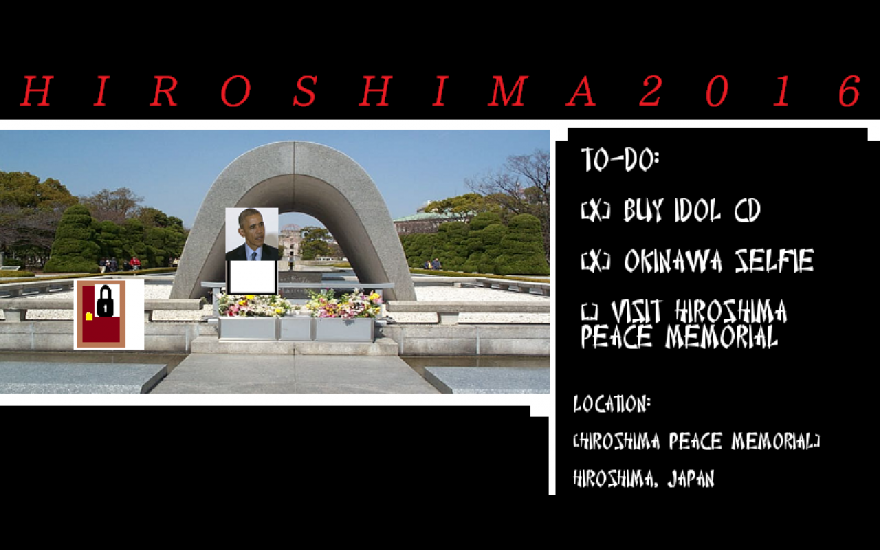 When I had the chance to visit Japan, after years of accruing savings and getting a handy-dandy passport, it was a dream come true. I could collect adorable capsule toys wherever I travelled, eat conbini onigiri at my leisure, and admire the beautiful streets and swift transit system. Japan was the most amazing place I’ve ever visited.

HIROSHIMA 2016 is lo-fi as hell. Low-res JPEGs plague every “background,” and even the text of HTCH’s Twitter feed is of the lowest quality. Between tweets of excitement from HTCH of visiting Japan are cheery Kotaku headlines, like one about a new Catbus for adults at the Ghibli Museum, and humorous tweets from HTCH’s own peers. All of these are real tweets, of course. And as the game progresses, the tweet-checking grows more and more egregious.

HTCH is on a quest to buy an idol CD (coupled with a way-pitched down version of kawaii-guru Kyary Pamyu Pamyu’s “Pon Pon Pon”), take a selfie in Okinawa, and visit the Hiroshima Peace Memorial. Except, all of these steps take HTCH down a path to witnessing the dark side of Japan. Along his journey back to Narita Airport, HTCH sees President Obama’s press conference at the Hiroshima Peace Memorial, the aftermath of a horrific crime in Okinawa (the latest in a long line of U.S. Marine-involved assaults), and even the recent stabbing of a pop idol take place.

When not creating the bleakest of visual novels, HTCH spends his time composing music and making games. His current most prominent projects are Perfect, a “software with elements of 2D exploration games, web browsers, music albums, and nonfiction interviews,” specifically about the issues rising from the future state of nationality, race, and identity, and Even the Ocean, a diversity-driven adventure platformer.

You can download HIROSHIMA 2016: Sean Hogan Visits Japan for PC or Mac here. You can also follow the ongoing-development of HTCH’s next big project, Even the Ocean, here.