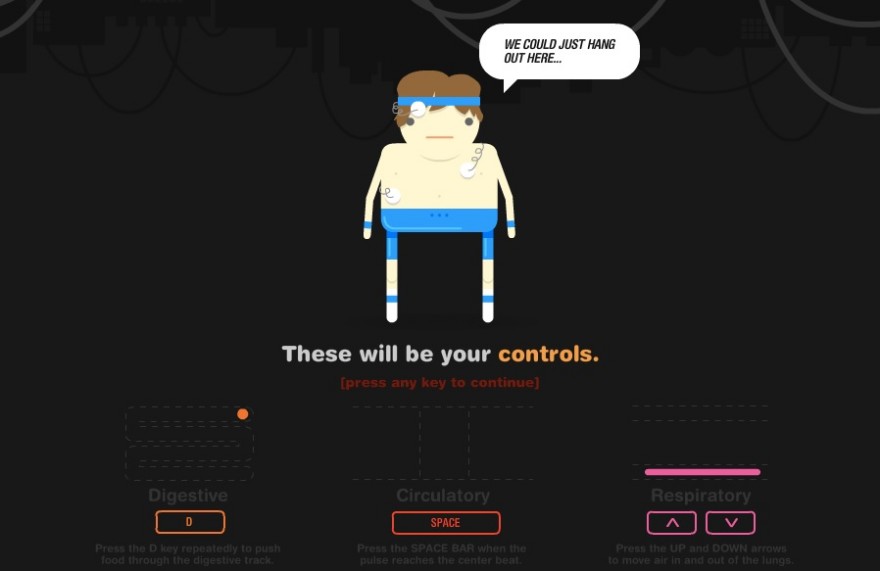 They say confession is good for the soul, so let’s start with this: I killed a human in three seconds. Before keeling over he had just enough time to say that he felt funny. You don’t say? He doesn’t say anything anymore, and so I sit alone with my conscience waiting for Seal Team 6 to monetize my murderous efficiency. I am still waiting.

Before you call the police, I should probably offer some exculpatory context. The incident in question occurred while playing Conor Mccann’s System Control, a “human body sustaining simulator” that was created for the 28th Ludlum Dare game jam. You play as a human’s vital organs. That’s a lot of responsibility for a person to have, especially when it’s so goddamn difficult. Keep hitting “d” on your keyboard or the human’s digestive system falls apart. Press the space key at just the right frequency or else your poor patient will succumb to cardiac arrest and/or failure. Breathing, as you may have heard, is rather important, so do be sure to keep the respiratory cycle going by pressing the up and down keys at just the right time.

System Control suggests that human life is quite miraculous. There are so many ways to die, especially compared to the possible paths to survival. And say the human whose life depends on you lasts more than a few seconds, what does that even mean? He still could not possibly expect to fare well. At some point your fingers will get tired, and then it’s all over for him. At some point before then, you might sneeze and bring to an end his promising life. The odds are always very much against the human whose digital life is literally in your hands.

More generously, System Control is concerned with the challenge of understanding the inner workings of the human body. Historically, this is not exactly an area where humans have acquitted themselves particularly well. Hippocrates, in On the Nature of Man explained, “The Human body contains blood, phlegm, yellow bile and black bile.” Though Hippocrates died in about 370 BCE, this theory lived on, inspiring the work of other renowned medical thinkers including Galen of Pergamon. Depending on your choice of historic turning points—and historiography really is little more than a choose-your-own-adventure game—these theories were debunked somewhere between the 17th and 19th centuries, which is good news for you, dear reader, but did little help just about everyone who came before you.

System Control has a relatively accurate understanding of how the body works, but demonstrates that such knowledge is not enough to actually keep people alive. Medicine is hard. System Control will convince you that an abstract knowledge of the vital organs is not enough to keep a person alive, but if you need more convincing, there’s always The Knick.