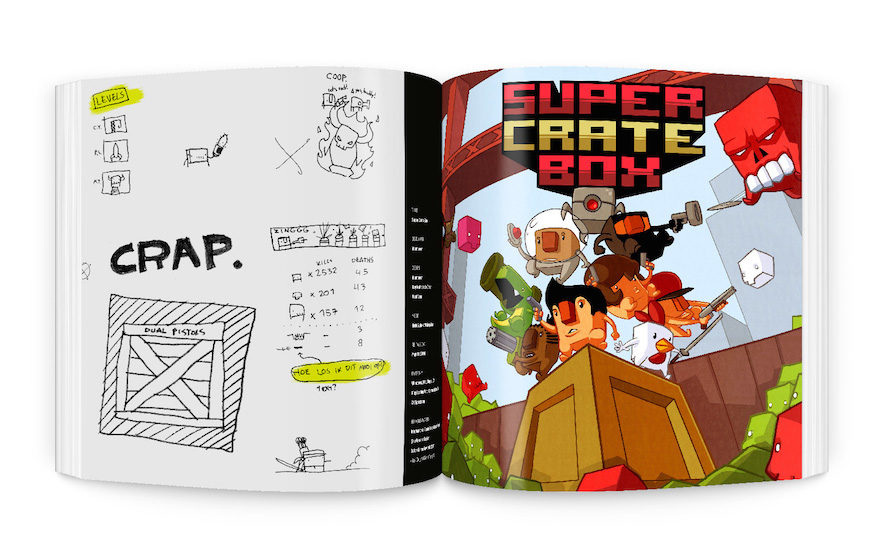 We haven’t heard much from Dutch videogame studio Vlambeer for a while. Since the release of Nuclear Throne last December, they’ve been rolling out updates to that and some of their other games: Super Crate Box (2010), Serious Sam: The Random Encounter (2011), and LUFTRAUSERS (2014) are all getting updates. Besides that, Jan Willem Nijman’s been working on solo projects like DISC ROOM, which was a Humble Monthly exclusive, while Rami Ismail made Breach and Clean, a game about every hotel cleaning lady who’s ever hated you. But Vlambeer as a whole has still been kinda quiet.

It turns out that it’s because they’re announcing a book. (Writing? Creating? Compiling, in the time-honored, traditional fashion of digital hoarders.) Vlambeer turns six years old in September, so the book will be called 120 Years of Vlambeer & Friends. Bringing back arcade games since 1896. It’s written by the author of Killzone Visual Design, and looks just as pleasingly chunky and full of pictures as his first book—open pages sneak us a peek at Super Crate Boy concepts and some early ideas for their logo, which it seems was always a bear on fire. (I think Vlambeer means fire bear. I don’t speak Dutch.)

The book is a 20,000 word history of the company, plus interviews and concept designs, and is going to look really pretty on the coffee table that I don’t own. You can also get the Limited Edition, which is signed and comes with all of their games (and some prototypes!), along with a Vlambeer notebook that I would be terrified to write in. Since they’ve managed to get all of this done without us noticing, it’ll be shipping at the end of the year.

But don’t worry about Vlambeer! (Flambé-ar.) They’re still chugging along, and seem to have a host of projects in the works. Plus, they’ll be at PAX West at the beginning of September, so you can still buy shirts and play their games and bug them about what you should write in that notebook. It’s only the book that’s history.

Read Vlambeer’s whole announcement, then go forth and preorder.