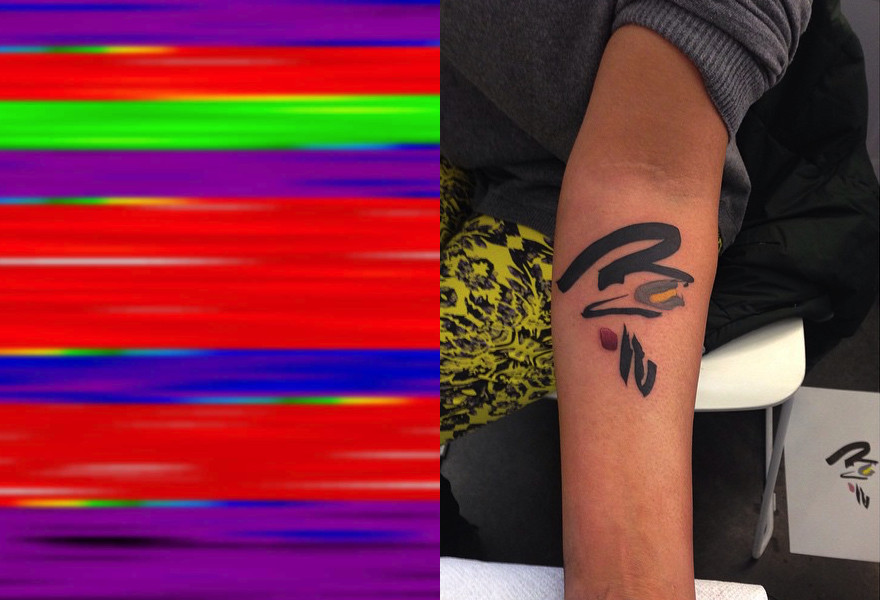 In 1954, a small group of Japanese artists called the Gutai (Embodiment) group became interested in revealing the inner qualities of the materials they used in their art through performance. In one piece, Akira Kanayama used a remote controlled car to spread paint on a canvas. In another, Kazuo Shiraga painted by sliding across a canvas on his bare feet. The paintings they made are presented as finished works, but the performances that led to them are sometimes photographed, sometimes not—in these early stages of performance art, it was unclear whether the work was the painting itself, or the performance that created it.

Amanda Wachob’s abstract tattoos have circulated around the internet before—notable because they make no reference to real world objects or ideas, and instead are full of colorful brushstrokes, and playful swishes. Earlier this month, she teamed up with neuroscientist Maxwell Bertolero to work on “Skin Data,” a project designed to record the intangible and impermanent act of creating the tattoo.

The resulting images are records of the tattooing process.

During her tattoo sessions at the New Museum, she and Bertolero recorded the voltage of her needle over time, and mapped the range of voltages as a range of colors. The resulting images are records of the tattooing process. They were signed and given to the receivers of the tattoos, and numbered prints were on sale in the museum shop. Wachob is interested in the ways data can afford us new ways to think about art, and in the process, creating new work out of her performances that wasn’t possible in the early days of the medium.