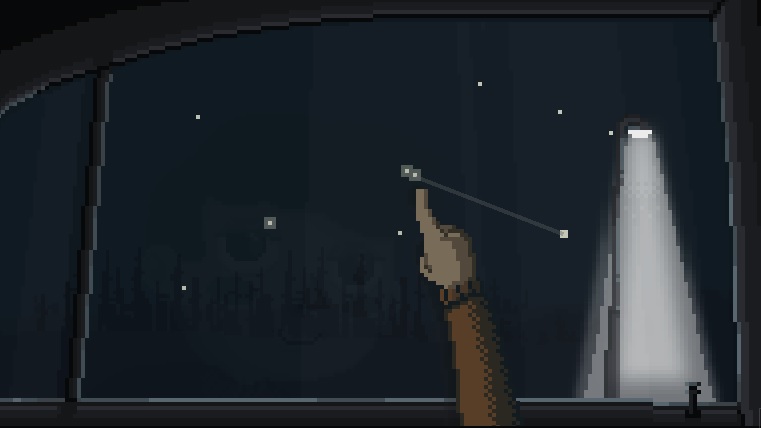 I don’t remember many of the places I was taken to between the ages of two to 10, but there is a sort of coalesced impression I have of the many backseats windows I saw the world through. That window is always safety-locked, for one, and won’t roll down past half-way. Usually, it’s raining outside, and I’ve sketched out little monsters in the condensation.

Waiting in the Sky puts you in a similar backseat, the one from all your childhood memories. Instead of doodling on the fogged-over glass, you’re making constellations out of the stars. The celestial bodies are randomly laid out each time, and while some of my creations (striped horn-snake, hourglass tied to a balloon) could be called stretches of the imagination, stretching imagination is what kids do best.

Waiting in the Sky was originally made by Luis Díaz Peralta, Rubén Calles, and Celer Gutiérrez Dávila, for LocusJam—an event hosted by the inimitable game designer Porpentine. The goal was to make games that captured specific places and feelings, and when measured under those criteria, Waiting in the Sky is unarguably successful. It isn’t just the art and theme of the game that creates such a vivid moment in time, either—if nostalgia could be put into music, it would surely have the same bittersweet piano notes, the strings plucked like raindrops.

The ability to share your constellations on Twitter is built right in, but I refrained from doing so. It wasn’t out of any sort of artistic embarrassment, though; in my recollection, moments like this were solitary experiences. There are, after all, no others present in Waiting in the Sky, no suggestion of radio or travel-chatter. It’s just you, the stars, and the pixelated countryside rolling by in shades of night-time blue. Cottages with warm yellow windows dot the hills. Street lamps illuminate brief stretches of road. Highway signs, in all likelihood, point home.

You can play Waiting in the Sky in your browser.