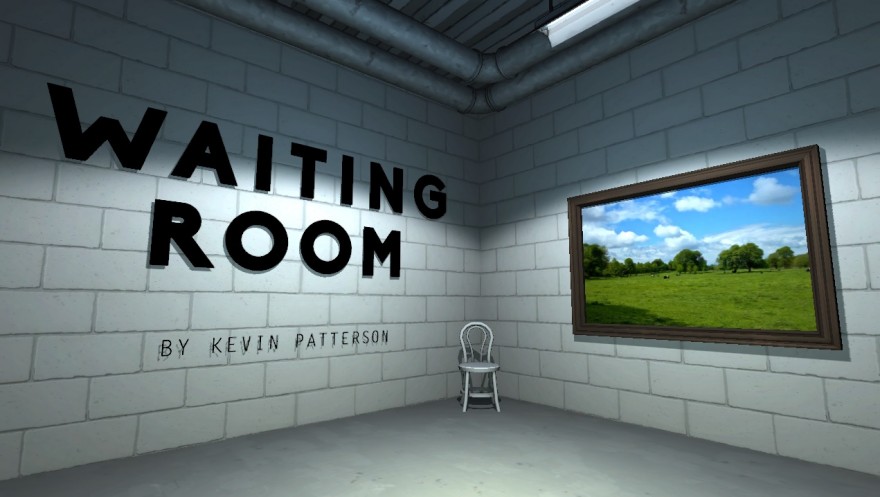 Kevin Patterson. Who is this guy?

He appeared in my Twitter mentions a couple of days ago with an invitation and a hyperlink. “Warp yourself into my latest mind-bending interactive experience. Takes 5 minutes,” he said, linking to kevinpatterson.org. I wasn’t the only one. Patterson made himself known to others who share a common interest in experimental videogames: Rami Ismail of Vlambeer, Tim Schafer of Double Fine, Chris Remo of Campo Santo, and many others.

Except, Patterson doesn’t see his “interactive experience” as a videogame of any sort; he calls it “art,” and he’s devout to the application of the term. If you head over to his website and click on the “PressKit()” link in the top left corner, it won’t send you to a press kit, instead turning into a sentence that reads “You can’t market art.”

Patterson is an irritating, self-absorbed artiste

More telling of Patterson’s public character is his interaction on Twitter with Grant Kirkhope, composer of games such as GoldenEye, Banjo-Kazooie, and Viva Pinata. Kirkhope was played by Patterson as a talent that had been “misused” by videogames. And when Kirkhope questioned Patterson’s authority on his art, Patterson provided an austere mountain scene marked with his signature, which another person in the conversation described as “dull” and “flawed.” Patterson mostly ignored this criticism, instead imploring Kirkhope to realize the brilliance of his art by sitting through the full five minutes of his interactive project, Waiting Room.

The pomposity here seems infinite. Patterson is an irritating, self-absorbed artiste, unable to see anything beyond the length of his own nose. He plays up his creation as if it were the most important piece to ever be whispered into existence. And what is it? Waiting Room is described by Patterson as a “playful exploration of time and how we spend it as a society and as individuals.”

You can probably predict how it goes: you appear in a room for a total of five minutes—unless you choose to exit early—and you wait. You don’t know what you’re waiting for but Patterson promises it will be worth your time. Inside the waiting room, there’s a chair in one corner, a painting of cows grazing in a pasture on one of the four walls, and a huge clock on another that ticks very loudly with each passing second.

More striking is the game’s title that sits boldly on a wall. “Waiting Room,” it reads in black capital letters. And there it is again, right under the game’s title so you don’t forget, the artist’s signature: “Kevin Patterson.”

The bare minimalism of Waiting Room‘s presentation, play length, and especially interaction is almost as minimal, abstract, and deliberately provocative as John Cage’s silent composition 4’33”, which is, you guessed it, four minutes and thirty-three seconds of silence. Waiting Room is an interactive experience with hardly any physical interaction to be had, but just enough open-ended questions so as to provoke endless interpretation. It’s the kind of art that doesn’t seem to have a point, or purpose; it just is. You can contemplate your life inside it, try to imagine being inside the painting, get far too interested in the dark smudge in one of the corners, or attempt to jump off the chair and fall through the floor (into the “freefalling honesty of the void“).

Is this really what Patterson considers to be so important and “mind-bending” that he felt the need to reach out to people online about it?

I don’t even know if Kevin Patterson exists.

Patterson wants more than that, too: he invites those who have “engaged” with Waiting Room to reach out and tell him their personal interpretation of it. His conversation with game creator Jonatan van Hove is the most exposing of these conversations that Patterson conducted, and the one that confirmed my suspicions about him. Patterson pushed van Hove to come up with an airy interpretation of Waiting Room, but van Hove didn’t have any of it, instead stating that “having someone force [him] into waiting for who-knows-what for 5 minutes is not [his] idea of finding inner peace.”

To this, Patterson replied, simply, “My job is done.”

Just take a minute. Think about what Patterson is: his Twitter account is @InternalArt; he tries to make legacy-making quotes for himself such as “Every person is an artist interacting with one another and their environment,”; when he address his online audience he uses “Dear Earth” as if the whole world has its eyes on him.

Has it sank in yet? Yes, Patterson’s pomposity is all performance. As he tells those who talk to him about Waiting Room, he actually created it to be “a sardonic and arresting take on the current conceptions of what’s typically perceived as art.” What’s further revealing is what Patterson told William Pugh, co-creator of The Parable. “ Parable was a bit of an inspiration for my latest piece,” he tweeted at Pugh.

That’s significant, as The Stanley Parable is a videogame that deliberately and mockingly subverts how the medium tends to confine its players to rules, and how many videogames follow predictable design patterns. Patterson points the same cynical lens at those who create videogames that they purport to be art, especially those that carry a pretentious attitude about them. I don’t think the parody that Patterson is has a problem with videogames being considered art, it seems specifically targeted at those that push the term onto their creations, and speak up their own importance to an unbearable degree.

I don’t even know if Kevin Patterson exists. His email address is art@kevinpatterson.org, for crying out loud. He’s a fabricated persona that pushes himself on to others to encourage them to be more open-minded, and to strive to create outside of videogames if they want to be known as legitimate artists. He’s a deliberately annoying and provocative parody that puts his signature on everything he creates and calls it brilliant, and yes, he’s already created a number of haters. So dedicated is this parody that it’s almost indistinguishable from the real thing.

What’s next for Kevin Patterson? He’ll be attending GameCity this month in Nottingham, UK, with his latest art piece, which is perfectly titled “The Kevin Patterson Experience.”