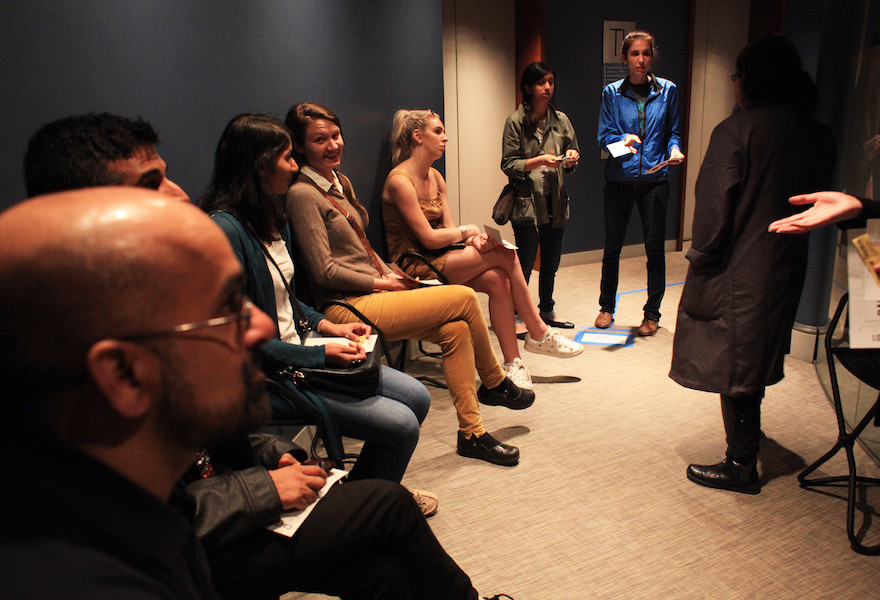 When I left the Rubin Museum of Art’s Waiting Rooms exhibit, I had 14 yellow tickets, 24 pennies, and a form with a picture of a unicorn on it in my pocket. It sounds like the random hodgepodge of garbage a quirky Tina Fey character might carry, yes, but within the world of the exhibit, it was a veritable fortune.

Created by architect Nathalie Pozzi and game designer Eric Zimmerman, Waiting Rooms is a building-sized game about bureaucracy. In it, the museum is divided into a series of nonlinear rooms, each with their own arbitrary task to complete as well as a required exit fee of either yellow tickets or pennies. To start, groups of players are first given a certain number of tickets based on a hidden set of circumstances, which they can then distribute between each other how they see fit. Then, players are free to split up and explore the rooms in whatever order they wish, so long as they can afford it. Players who are able to pay the exit fee are free to leave a room whenever they want, but those who cannot must instead wait for a set amount of time before proceeding. The tasks also carry the opportunity to earn tickets/pennies, but this usually comes at a fee of both tickets and time.

The end goal of Waiting Rooms is not clear, and maybe that’s the point. In my playthrough, I focused on getting higher and higher into the building, but I had no idea if I was actually reaching the end of the game or moving farther away from it. Eventually, I became less concerned about winning the game and cared more about achieving my own personal goal, an experience I seemed to share with many of my fellow players.

I never got to see the top of the staircase

With each room presenting a new challenge and arbitrary set of rules, I felt a bit like Chris Evans moving through the many highly varied train cars in Snowpiercer (2013), or maybe a spiky haired protagonist making a game-of-death tower climb in an anime (Yu Yu Hakusho comes to mind). In the rooms I visited, I played a combination of rock-paper-scissors and prisoner’s dilemma, sat waiting in an elevator until someone on the floor I needed to visit happened to call it there, was forbidden to speak while being randomly assigned a direction to explore, and eventually reached a roadblock in the form of a staircase, a currency exchange, and a room that gave players pennies in exchange for filling out forms. The staircase required 10 tickets to climb it, so I kept moving back and forth between the form room and the currency exchange, trading my freshly earned pennies to try to grind out the necessary tickets. Unfortunately, I never got to see the top of the staircase, as a gong soon rang out signaling that I was out of time. I did, however, leave with a sweet unicorn drawing, which I had doodled on my form to kill boredom while waiting to hand it in.

After the game wrapped up, we were lead to a brief Q&A session where players asked the designers questions as well as shared their experiences. For some, like myself, other players were surprisingly kind, giving advice and tickets/pennies when needed. Others, however, were not so lucky. One group, it seems, had a single member steal all their tickets at the beginning and leave before they could do anything about it. Some bucked the system entirely, staging a socialist revolution where they pooled tickets together and did as they pleased. Yet another person just left, frustrated with the whole thing.

I asked Pozzi and Zimmerman about their goals with the project. “I think that Waiting Rooms in part is a way to express both the value and the arbitrariness of human systems,” said Pozzi. “I have experienced some truly absurd and hilarious bureaucratic scenes,” she explained, referencing her experiences dealing with immigration and customs. She spoke about an experience where she had waited in a long line of angry people while going through customs, only to be greeted at the end by an officer who was all smiles. “It was a moment of true, unexpected, intentional kindness within a very cold and inhuman system,” she told me. She asked why the officer was being so kind, to which he told her that he wanted to prove that New Yorkers are nice. “For me, Waiting Rooms is not just about designing social rules but in how those rules become a personal experience that is different for each visitor.”

Zimmerman mirrored this sentiment, talking about what players had told him during previous showings of the game “For some of the participants, it represented the genuinely unpleasant hell of navigating a bureaucratic system,” he shared. “For others, it was a kind of Willy Wonka adventure full of mystery and magic.” I asked him what questions he would like us to be asking ourselves as we leave. “I’m not sure,” he said, “but  I am so happy that everyone can have their own individual, personal experiences.”

“I like the way that Waiting Rooms plays with value”

On my way out of the museum, I was stopped by those who had revolted, where they gave me all those extra pennies and tickets I mentioned earlier. During the game, this would have been a boon, but now, they had become worthless. The one goal I had set myself to pursue for so long—get more tickets—suddenly meant nothing when divorced from the system that gave it meaning, leaving me feeling like an old miser who had wasted my life trying to strike it big, and was now wondering what the point was.

Later, I emailed Pozzi about her thoughts on this issue of how we assign value in our culture. “I like the way that Waiting Rooms plays with value. There are several currencies in the game, and there is a tremendous degree of arbitrariness about whether you end up with many or few resources,” she told me. “Time seems to be the only resource that is actually ‘free.’ But actually, time is the only currency that has a deep, non-arbitrary value outside of Waiting Rooms.”

So much of our culture requires us to sacrifice our time in pursuit of wealth. Waiting Rooms asks us if that trade is really worthwhile.

Waiting Rooms has recently wrapped up its final playtest at the Rubin Museum of Art. While there are “no definite plans to show it in the future,” Pozzi and Zimmerman look forward “to more testing and collaboration in the next version of the project.” For more, visit the Rubin Museum’s website.

All photos taken and provided by Ida C. Benedetto.