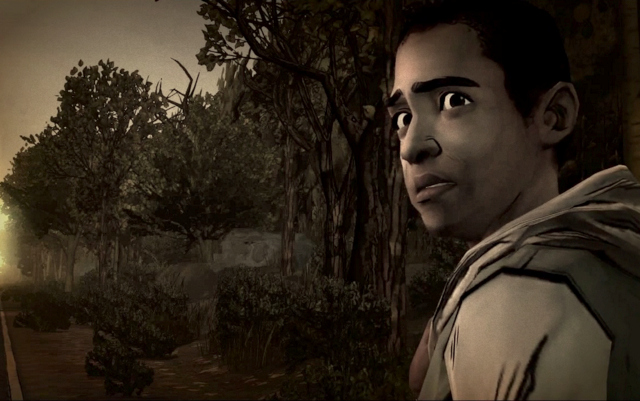 When George Romero sent zombies doddering through a shopping mall in 1978’s Dawn of the Dead, he set a mandate that the zombie movie, unlike much other pop horror fare, would be Important. It would Say Something About Humans. Twenty-five years later, Zack Snyder remade that film as a hyper-lush, headkill-filled music video, and in so doing made the most direct counterpoint imaginable: No, he said, It Won’t.

Snyder was giving voice to an undercurrent that had always existed in the genre, one that yearned to give into its, shall we say, pulpier thrills. (It is the only type of film that categorically includes headkills, for example.) There has been a further uptick, in recent years, of the zombie movie not as an allegory but as simply a movie containing zombies. They’re a meme, not a message. It’s easy to bemoan this, but either school of thought can produce wonderful art. The high-brow camp brought us 28 Days Later, which is shot-for-shot the most cogent, accomplished zombie film ever made, but the low-brow camp brought us Zombi 2, in which a zombie fights a shark. (No one wins, we all lose.) These are equally important.

The Walking Dead, in its many media incarnations, has fought against the meme-ification of zombies. With its weighty games of interpersonal politics and its pious evocations of racism and misogyny, it plants its flag firmly in the high-brow camp. It Says Something About Humans. The comic treats zombies and their accordant gore as a frame around the carefully painted human characters, a model that AMC’s show and Telltale’s games have studiously followed.

All of which would be fine if the humans in The Walking Dead weren’t such insufferable fucks. For all the moments of quiet cinematic grandeur Telltale achieved in the first season of the game—the starving boy arcing toward the window in episode 4, the lightning-drenched finale of episode 2—they still had to play by The Walking Dead rulebook, which is to say: bickering like drunk in-laws. It is difficult to be deeply invested in the shifting balance of power within “the group” when that power-shift is played out as two people with names like Steve and Zeke mewling at each other about who gets to hold the flashlight that night. I cannot become invested in the flashlight. Or the medicine. Or whether or not the sewers are the fastest route. Or whatever.

When the show gets violent, it does so lavishly, but the game is even more conservative. This is, maybe sadly, shocking for a videogame: that it would err on the side of dialogue. Telltale seems to almost revel in this naughty tastefulness, treating their characters not as zombie food but conversation points. Early on in my playthrough of 400 Days, Telltale’s new episode of the game, I find myself being drawn into the muck again. “We’ve got to get out of here!” one person yells at me. “If that door is unlocked!” someone else yells in immediate counterpoint. Here we go, I think: which side will I take? Who will I choose? But within a minute, I have discharged a shotgun into the leg of one of these men, and within a minute from that point, the story is over, and I am someplace—and someone—new.

This is a remarkable tweak to the series formula. Not the violence; the narrative confidence. Instead of doggedly following one story, 400 Days is broken into five smaller episodes which can be tackled in any order. There are, to be sure, barely any zombies in the hour-or-so episode. But by dropping me with no forewarning into, and then out of, these character’s lives, I never have a chance to hate them, nor they to hate me. (You should see the way Kenny and the gang eyed me toward the end of season one. It was a hatred that rearranged the very bone structures of their faces.) 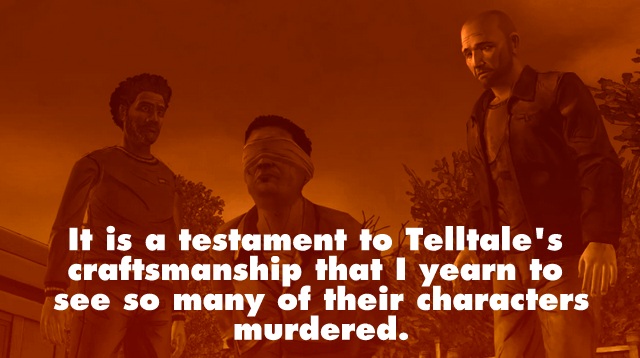 Rather than stewing in contempt-filled internal spaces for hours at a time, I am swept from turning point to turning point, repeatedly making the sort of life-changing decisions that would be confined to the end of an episode in the main series. But there is delightful variation in the plotting of these short stories, and scattered throughout are moments of the sort of disciplined beauty that made the first season so affecting. At its outset, a single shot is, in a flash, translated from its pre- to post-apocalyptic state, again using the images of the undead as a sort of narrative calling card rather than a narrative point. As Bonnie, I stalk through a grid of cornstalks in near-silhouette, the sky above me a swirl of salmon and indigo ink.

Non-participation as gameplay. Apathy as a choice.

All of these characters and decisions will in season 1 and 400 Days, apparently, impact season 2 in some manner. But it’s as Russell that I create my most lasting decision. When a vaguely racist good ol’ boy pulls up to me in a truck, nondescript thrash playing on his tape deck, I find myself so displeased by the prospect of jumping aboard that I cannot speak. So I don’t. I don’t even choose silence, which Telltale offers as a response. I just stare at him until he can’t take it anymore, at which point he continues talking. It’s a moment of glorious liberation built into the design: non-participation as gameplay. Apathy as a choice. I have no idea why I haven’t played the game this way forever.

I get into the truck eventually, despite everything. There is, after all, a story to tell—five of them, in fact. That each centers around a moment of awful human-on-human violence is probably intentional; it also might be why I liked 400 Days so much. It is a testament to the skill of Telltale’s craftsmanship and their devotion to The Walking Dead lore that I yearn to see so many of their characters murdered. As I continue to choose to not respond, not to even respond with silence, to simply icily stare these bickering humans down, I forge a path of tenable compromise. The timer ticks down on each dialogue tree, the camera cutting between characters as they adopt various unyielding stances. I never interject. I am not playing their game anymore. I am playing my own.