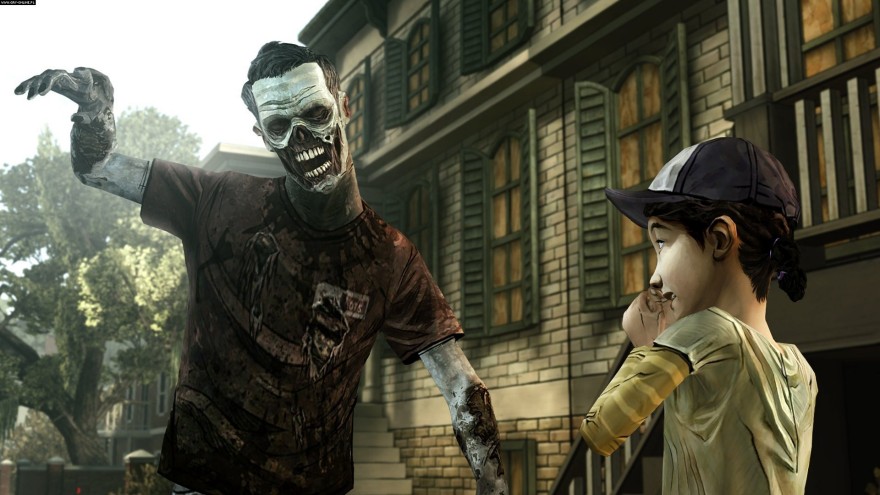 The main character of The Walking Dead: Season 2 is Clementine. When we first find her in Episode 1, she’s a zombie.

Well, a zombie in one sense of the word.

The Walking Dead has never been forgiving. The series is less about zombies and more about the humans that have to suffer through a desolate, uncivilized apocalypse while trying to hold on to the lives they had before. It’s less about gunning through hordes and more about figuring out who should get shot and if it’s worth it to even try. It’s about trying to maintain humanity and not become a monster.

The walkers from the title are not the zombies—they’re the survivors. As hope moves further away, the people lose themselves and become shambling shells of the beings they once were. Some aren’t afraid to kill in order to survive, going so far as to eat human meat, steal, and torture others just to make it to tomorrow.

All of this is expressed in the first five minutes of Season 2.

The Walking Dead has always been ruthless in its storytelling and pacing, but Season 2 ratchets that up even further. It seems to relish tragedy. While the first game was more subdued, with the horrible moments coming along in their own time, the sequel makes sure that you understand that Clementine is going to have a bad time and you’re going to have an even worse one watching it.

The first game’s quiet moments were purposeful, building up a sense of false security for both you and the characters. Every moment where Lee spoke to Clementine or bonded with her about learning to shoot a gun was awful because you learned, over time, that it wouldn’t last. Each conversation was sacred, harkening back to when Lee pushed Clementine on the swing and spoke about their futures without much dread.

If Episode 1 is any indication of the rest of this new season, those moments will be few and far between, the story instead going for quick successions of adrenaline-pumping sequences and downers that don’t give Clementine or the player any time to breathe. The leap between the first five minutes and the rest of the game is even too quick, jumping from three months later to 16 and giving the player no time to process the chronology. The game feels like it’s in a rush to get to that next torturous choice and to put Clementine in even more danger.

There are only two moments where the player can just sit back and watch, but they’re too short and the shifts in tone are too jarring to be of any use. In the middle of the episode, for example, Clementine washes up on an unfamiliar shore beside a river, and finds an abandoned campsite only occupied by a starving dog named Sam. You can choose to play with the canine while searching for food. But after you find a can of beans the dog goes crazy and chomps at Clementine’s arm before falling onto some arrows. A brief moment of play is shattered by another awful choice: do you let the dog whimper and die, or put it down?

A brief moment of play is shattered by another awful choice: do you let the dog whimper and die, or put it down?

Clementine feels very little as all of this is happening, focusing solely on survival and giving off a dark edge that she didn’t have in the first game. This is all understandable considering how things shook out in season one, and it’s sympathetic enough to keep you going despite the constant barrage of action and death. She’s still the same girl she was when Lee found her in the tree house, but any effort you might have put in the first time around to shield her from the horrors of the apocalypse has been useless.

The impact of the second season will also largely depend on your feelings towards Clementine in the first game and what choices you made, although it’s still unclear as to what consequences some of those results might have. The first episode is all about setup—introducing new characters, setting the stage for Clementine, and above all showing you that nothing is different, even though more awful events seem to happen more frequently.

In a way, the game, too, is a shell of what it once was. Season one was a slow build and a horrible pull. There was a lot of humanity to it, focusing on its characters above anything else. The sequel has a lot of that pull, but none of that subtlety or ease. So far, it’s just a list of tragic events. This is, of course, just the first episode. As we’ve learned from the first game, it only gets worse from here. Maybe it’ll also get better.