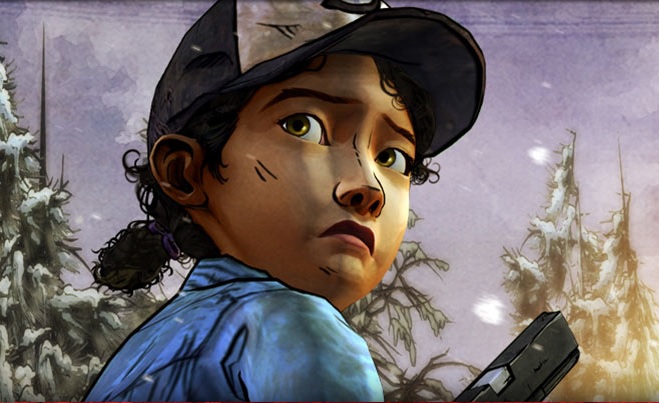 Title:
The Walking Dead: Amid The Ruins

The Walking Dead Telltale games series has always been about the use of the Chekhov’s Gun, a literary mechanic that says that once an object is introduced, it has to be used. In the case of a gun, it has to be fired. The fun of this trope is the tension—how or when somebody is going to figuratively or literally get shot. The gun sits there, taunting us until it happens.

This sometimes works in contradiction to the nature of The Walking Dead, which is about death, hardship, and the human condition more than it is zombies. There have been many “guns” introduced in Season 2, such as a pregnancy, so it’s a wonder why nothing has gone off yet. It’s why it’s hard to look at Season 2 of The Walking Dead and see that there’s only one episode left. It becomes even tougher to fathom when it’s so unclear as to what’s going to happen. After the turmoil that left Clementine, our ball-cap wearing hero, alone at the end of Season 1, do we even want to know?

Clementine’s journey continues in the new episode “Amid the Ruins,” right where the last one left off: in the midst of an escape from Carver’s oppressive compound and right in the center of a zombie horde. Episode 3 abruptly cuts out right after making a drastic decision, and the next part feels just as blunt, leaving you to wonder what’s going to happen after the escape. The answer? Not much. At this point, the player can’t even figure out what the remaining characters are working for. There aren’t any answers provided.

Unlike in the first season, where the goal was cleaner and linear (get to Savannah, get to safety), here our protagonists seem to be wandering around, waiting for the cold to take them. Rebecca is still pregnant, half of the group is missing after the escape from the horde, and the others are dealing with loss to such an extent that they might as well be missing. The bulk of this episode contains Clementine and other group members just looking for a place to stay. The characters, too, seem to be trying to find the story.

Linear games usually present the player with a goal, whether it’s to get to a certain destination or to become strong enough for a certain battle. In “Amid the Ruins,” which is the penultimate episode in the season, the game comes to a screeching halt, with no goal in sight. In the first three episodes, Clementine and the new group of characters are trying to get away from Carver, a villain with a dictatorship built on fear. It’s nothing we haven’t seen before—in fact, it’s something we saw in the first season—but it works. There was conflict, stakes, a chance for something better to work for them (we saw that possibility in the ski lodge, a warm shelter with all the provisions needed and relative safety from the world outside). Now that the Carver storyline is done, with the group escaped and Carver dead, we have nothing.

But is this a bad thing? Not necessarily. Episode 4 draws upon this uncertainty, throwing Clementine in the middle of countless arguments between the adults, where people are unclear as to the next step. The title of this episode—Amid the Ruins—is apt, because it is about attempting to pick up the pieces, but how can Clementine do that when she’s just a child? She’s the youngest person in the story and yet is tasked with having the most responsibility. The choices that are presented this episode are people asking Clem for advice and there’s a lot of pressure to basically decide the fates of those left. Clementine has become the defacto leader and mother of the group and it’s strange when you look past appearance and remember the little girl you helped in Season 1.

It’s interesting to note also that in Episode 4, nothing action-packed happens besides in the first and last five minutes. There’s no continuation of a plot since everything is wrapped up (for better or worse). Now, there’s just drama with the characters reacting to events and elements that are introduced, living in an aftermath that could lead to another storyline. However, Clementine and the others are ostensibly starting over, and it seems to fall on our 11-year-old hero to figure out what to do. She—and by transitive property you—are controlling the flow of events that will take us into the finale of this season, which may or may not be a good thing.

By the end of the episode, there is a possible goal presented when the group spots a town in the distance. It’s only mentioned briefly twice, so it seems unlikely. In the context of the game, it’s even improbable, though, since it’s starting to snow, food and group participation is running low, and, without spoiling anything, the Chekov’s Gun the past few episodes have been showing off finally fires in a stressful sequence of events that once again ends this part with a cruel choice. Of course, the consequences of that choice are left unclear.

The problem therefore with “Amid the Ruins” is that it’s an episode that takes place among others. Telltale games, such as the first Walking Dead, also had episodes that only served as placeholders for more explosive installments and it’s the same here. Arguably, the intensity of Episode 3 is so far the highlight of Season 2, and the foreboding nature of a Walking Dead finale speaks for itself without Telltale releasing it. Episode 4 naturally acts as a lull, so it’s unnerving that for the most part, it does little to move the story forward besides a few character moments and one major life-changing and tense sequence.

It’s easy to forget that, as with Clementine, there is still more to come. Episode 5 is on the horizon. We just had to sit through something else to get there.