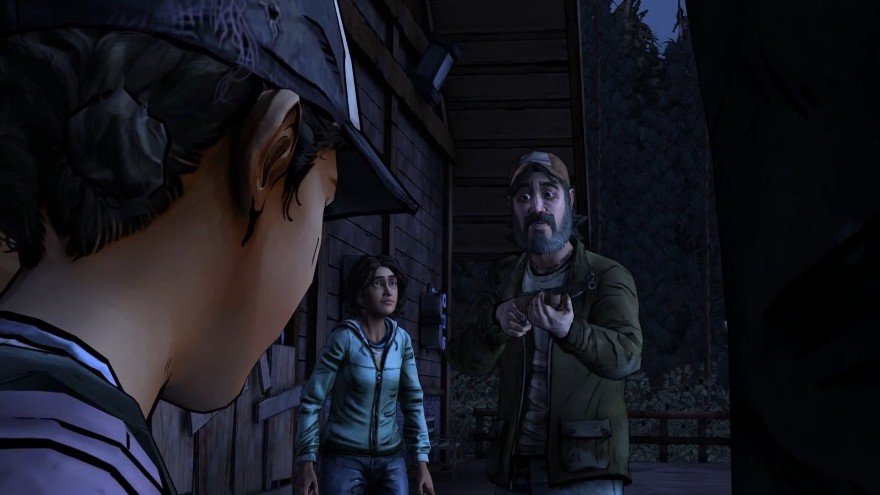 Title:
The Walking Dead: No Going Back

There’s a point in the Walking Dead Season 2 finale when you wish you were back in the first game. Without spoiling much, a flashback sequence featuring Clementine cements the pain the girl is facing. Without a stable support system, our protagonist becomes a child for the first time in five episodes, a vulnerable, small girl without the knowledge to make it in a zombie apocalypse that is making adults either act like animals or children.

I was constantly having to remind myself throughout the season that Clementine was a kid, barely 12 years old, not even hitting puberty yet. It’s easy to forget that she started off as a timid girl trapped in a treehouse. Despite this, she was constantly being forced to grow up. Getting thrown into a caustic environment like a zombie apocalypse isn’t helping matters, but when each adult around you acts like a child and then looks to you for wisdom, you just have to fall into the role.

Out of all of the episodes, “No Going Back” is the most relentless.

This was one of the more uncomfortable aspects of Season 2, which just wrapped up with its fifth and final episode. Compared to Season 1’s protagonist Lee, who became a de-facto leader for the dysfunctional main group, Clementine is much younger, much more ill-prepared for the horrors that eventual come. Even so, she gets treated exactly like Lee—like a sage or spiritual guide—when in reality, she’s just a kid. This episode, “No Going Back,” finally takes the time to sit down and remind the player of this, giving Clementine hard choices to make, but having moments of doubt and despair that culminate in one of the most heart-wrenching scenes in the series to date.

But the pauses in “No Going Back” are welcome. This season has been much darker than the previous one, having gone from a more fast-paced, action-oriented story about survival and a conflicted group working toward a goal to a forlorn, slower story with no clear ending or sense of purpose. Clementine, Kenny, and the others in Season 2 wander around for the bulk of the story, stopping only to think out loud about where they should go. There is a sense shared between both the player and the characters of hopelessness, so when the group sits down and shares a bottle of rum, it’s a relief. It’s a short scene, but in hindsight, it’s one of the few parts of the entire season where you get to engage with the characters as people, rather than as just pieces of a group with a giant gun. You get to look at Jane and Bonnie, for example, as singular. Of course this makes it that much worse when you have to inevitably make the hard choices, but in this series, you take what you can get when it comes to levity.

Out of all of the episodes, “No Going Back” is the most relentless, creating a string of arguments, shootouts, and moments where the player is put at odds with survival. That may  sound like every other segment Telltale has put out, but here, the walkers are relegated to cameo appearances, showing up twice to create a sense of urgency and fear. Everything else involves the people you’re with—namely Kenny, who has become a polarizing figure among the group. The Walking Dead series has always been more about the dark side of human nature more than the zombies, and in the final episode, any build up surrounding the Carver character pays off, albeit in a lackluster fashion. There is the constant question as to whether Kenny is becoming like Carver, and the way you interact with him and the rest of the group decides whether or not he meets the same, painful fate. It’s left deliberately ambiguous, but reveals at the end make any conversations you have with others about how dangerous he can be pointless, along with any choices you make as to whose side you are on.

Since it finally brings meaning to your earlier decisions, “No Going Back” has five different endings that are unique enough for the player to truly see their impact on the game. It’s a nice touch, even if some of the conclusions are better than others. The first ending I received, for example, left me feeling empty thanks to its lazy writing, ending abruptly and without a sense of closure. It put Clementine in a situation that she would never be in based on the conversations she was having in earlier episodes and that’s a bit disappointing. It’s like the developers rushed some of the endings, leaving them shorter and less impactful. It’s a shame when you end up in certain places and ultimately, your playthrough feels more meaningless and a little bit messy.

I was constantly having to remind myself throughout the season that Clementine was a kid.

However, going back and experiencing some of the other endings brings more relief to both the fate of Clementine and the understanding of the game. Each conclusion is about Clem and how she has grown up and how much she has hardened, but some provide more of an impact on the player. In one ending, for example, she goes back to being the child, under the support of adults that can take care of her. In another, she becomes the untrusting leader.

In this series we look at Clementine, see a child, and then experience where she ends up, getting to feel the disconnect between what it means to be a kid and how to be an adult. You can make the argument that being an adult requires making the hard decisions, and that’s what The Walking Dead series comes down to. As Lee once told Clementine, “sometimes there isn’t a right answer.” Sometimes you have to hurt someone else to save another for the greater good.