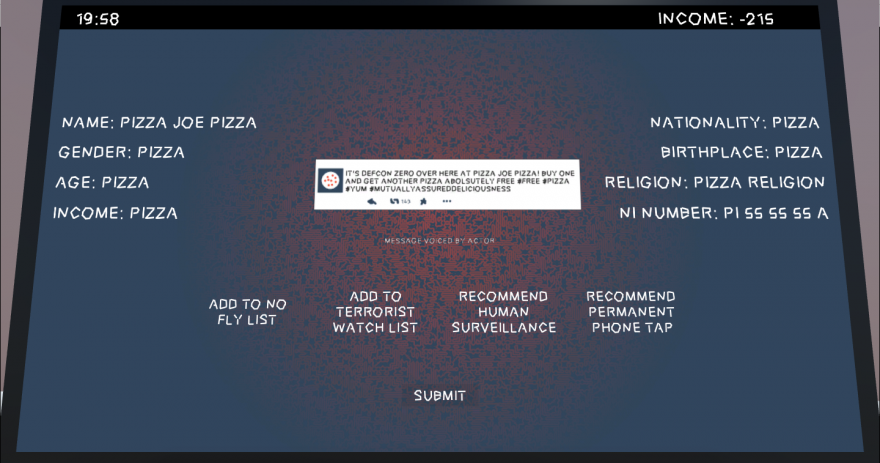 The Walls Have Ears is security theatre, but what isn’t? Body scanners at airports, metal detectors at sports stadia, fancy uniforms that imply nonexistent authority—it’s all a big show.

The Walls Have Ears is about that show, but you’re a performer. More accurately, you’re a desk jockey at an unnamed intelligence agency listening to intercepted communications. The files are arrayed on your screen like flashcards: enigma, DEFCON, rail gun, military intelligence, top secret. You sit and listen to the messages. Hopefully there’s something incriminating in each one, something you can use to flag the interlocutor for further surveillance. You must really hope that because you make your living flagging people for even more invasive forms of surveillance. The show must go on. But don’t flag any rich people for the no-fly list; as with any theatrical performance, the donors get all the perks.

The work performed in The Walls Have Ears more closely resembles the menial labor of online content moderators than that of security analysts. It’s boring and draining and the game is correct in noting that all office work is really about drinking coffee. Something needs to sustain you as you listen to all the sweet—and dull—nothings the citizenry has said.

year after year of this crap and you’d start hunting for humanity too.

The predicament of The Walls Have Ears’ protagonist bears a striking resemblance to that of Gerd Wiesler (Ulrich Mühe), the protagonist in Florian Henckel von Donnersmarck’s The Lives of Others. The work is cold and inhumane and it is this coldness that drives him to empathize with the little bits of people’s lives to which he is exposed. Playing The Walls Have Ears, you start to understand how this could happen. Voyeurism is fun for five minutes, maybe even ten. But year after year after year of this crap and you’d start hunting for humanity too.

That said, The Walls Have Ears hews even more closely to the arc of British historian and journalist Timothy Garton Ash’s fabulous memoir, The File. As a graduate student, Garton Ash spent time in East Germany, where he, like everyone else, was subjected to the sort of surveillance dramatized in The Lives of Others and, to a lesser extent, The Walls Have Ears. After the fall of the Berlin Wall, he returned to Germany and compared the Stasi’s file on his activities against his diaries from the time. Were the spies’ assessments correct? Had he been missing signs all along?

The Walls Have Ears strip human interactions of all sorts of context and then ask you to pass judgment on them. This obviously has chilling effects, but it also gives you a strange window into the world of strangers. Your perspective on their lives most definitely differs from theirs. One can hope that the surveillance state’s rotten edifice will be torn down, but even if these fictional individuals were to get their files it’s doubtful they’d say the show had been worth it.

You can play The Walls Have Ears for free in your browser.