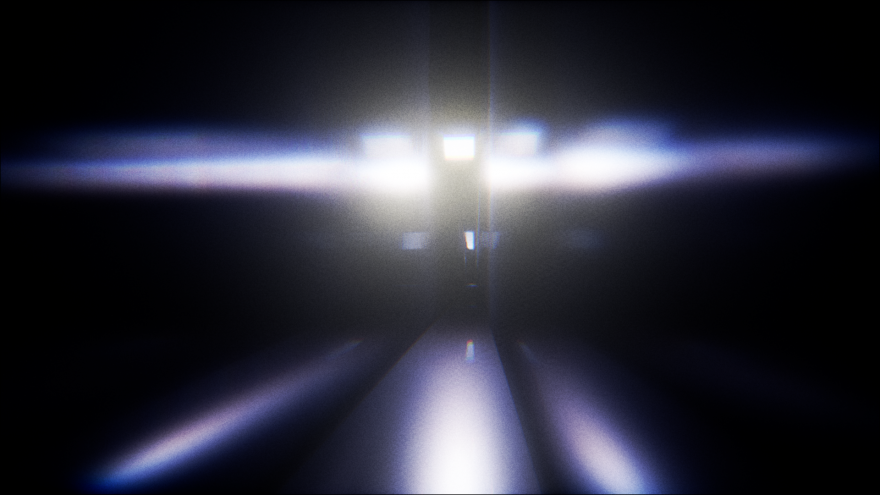 The 2010 sf/slasher hybrid Beyond the Black Rainbow was the best argument for shooting on film since…well, since the days where there was no other option. Directed by first-timer Panos Cosmatos (son of George P. Cosmatos, director of the hands-down best movie where Sylvester Stallone eats pizza with scissors), it ripples with visual imagination and a drifting, surreal approach to narrative. Just look at this thing. LOOK AT IT.

Oh yeah. There’s a scene in this film that feature a weird a jittering line running down one third of the screen, like a fuckup in the darkroom. But they didn’t go back and reshoot, no. Because what gives Beyond the Black Rainbow its flavor are those 35mm textures: the silky grain, the push-pull of one color bleeding into another, the spine-tingling play of light across the lens.

Alien: Isolation gets into this a bit, with its 70s-accurate anamorphic flares splitting the frame and the rainbow glow of chromatic aberration smearing this into that. But acatalept’s Parasomnia is a full-on love letter to visual distortion, a worthy peer to Beyond the Black Rainbow‘s fascination with texture. Acatalept made the game for the Unreal Engine October Game Jam, and describes it as “anxiety-inducing.” To say the least.

With no warning, the game throws you into darkness. In the distance there’s some kind of pulsing light, illuminating a gleaming labyrinth in split-second washes. You run toward it, and the labyrinth overtakes you, faster than seems possible.

Like being trapped in a sensory deprivation tank with a malevolent strobe light.

From there, it’s like being trapped in a sensory deprivation tank with a malevolent strobe light. Feeling your way around in this overwhelming darkness is, frankly, terrifying. Absurd amalgams of geometry loom in afterimage; a cyclopean sphere swivels endlessly; the corridors and caverns seem assembled by some cold algorithm.

Which, turns out, they are. Or they will be, in the full version of the game. Parasomnia as it stands is merely a slice of the sensory madness that acatalept has planned: procedurally generated labyrinths, shifting layouts (a la Cube; no word on murderous razor-wire grids yet), traps, and something haunting the maze. Yeah, that’s all this game needs! MORE dizzying terror!

Frankly, a pursuing force seems to gild the lily a bit. There’s already such a strong, transportive sense of isolation and confusion here that in the ten minutes I spent with the game I felt a little ill. The strobing light, digging into my dilated pupils; the bloated bassy clang that accompanies each flash; the impossibility of navigating this space confidently or ever accomplishing anything, really, ever. Because each time I try to get my bearings, the dark floods back in. And, to think of it, what the hell is making that noise?