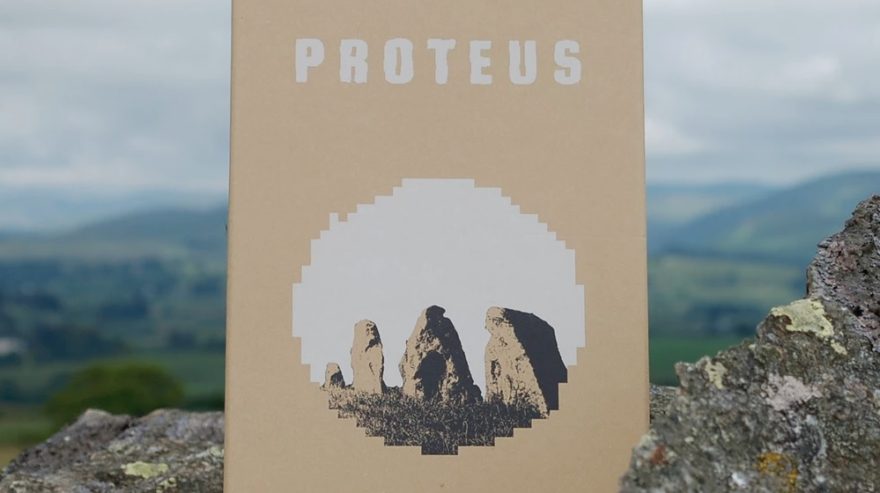 At first glance, there would seem to be nothing more tangible than a landscape. An arrangement of physical objects, spread out before you, traversable, understandable, concrete in every sense. Yet when you start to think of a specific landscape, things start to cloud. What is a landscape if not the play of light on a hillside, the gathering of clouds on a horizon, the mood of the image as seen through your eyes, in your time, with your colors? All of these things are transient, unfixed, perhaps impossible to repeat. A landscape as a formation might be concrete, but a landscape as an experience is a negotiation of the transient and intransient, between fixity and fluidity. This is a relationship that Proteus (2013) seems to understand almost implicitly. Its procedural landscapes, populated by scattered collections of chirruping flora and fauna, droning ruins and obscure shapes, never seem to remain fixed—encouraging wandering as a mode of engagement, rather than just a wobbly path in 3D space.

A booklet of wonderful esoterica

Yet there is an opacity to all this fluid time and space, one that some players might find too confrontational. How does one play Proteus? What’s the object of this exercise? If we have forgotten how to wander, how are we supposed to find ourselves again? The game’s long awaited Artifact Edition is, in some senses, a typically ambling and imprecise answer to such questions. Alongside the game—a simultaneously ambient and intense experience that even its creators Ed Key and David Kanaga might not have expected to make such a distinct impact—this version includes a set of physical and digital accompaniments, hand packed from Key’s back bedroom nestled in the bucolic landscapes of Cumbria.

Primary among them is the Field Guide and Walking Scores: A booklet of wonderful esoterica that shifts between faux-academic musings and John Cage-like diagrams of musical staves and natural orders. There’s a childlike crudeness to the sketches that flower across its pages, one that mirrors the charming colors and shapes of the game’s flat graphics. These, like the thoughts of the fictional Pseudo-Fludd also placed among these pages, suggest not a fully-formed philosophy, but a series of passing notions, marked on paper with the lightness of a daydream or doodle. Not to say that this is a weak or facile set of ideas; more a series of deep thoughts, simply wandered through with the lightest of footsteps: “Sky and the earth and foliage and creatures are all considered in terms of their causal structure in Time, Creation, which is considered as walk, as musical line, as branching tree, as geological survey, as organism.”

That list—a walk, a musical line, a branching tree, a geological survey—feels like a fairly good description of this version of Proteus. Take the included “soundtrack” the Proteus Suites. A series of arrangements built from the digital cacophony of the game’s reactive audio by composer David Kanaga, they feel like the most transient element of the entire package. Without the visual cues that unite them with the game’s landscape, these chirruping sounds meander off on odd vectors, taking you with them, if you stay to listen. These sonic landscapes suggest both possible paths through the game’s own formations, as well as imaginary journeys undertaken in idle daydreams, soothed by unknown creatures. They are a survey of past wanderings, a musical composition for live performance and a score for future voyages.

they suggest a landscape

And then there is the Protean Map, a card game of sorts, designed to facilitate the creation of imaginary landscapes and the journeys that animate them. Perhaps the most tangible and concrete element of the collection—self-contained, able to be shuffled and dealt—these cards are paradoxically little more than a series of suggestive descriptions of places or shapes, events or frames, ready to be arranged to esoteric rules. These rules don’t quite make it clear if we might use them to walk in Proteus, or in the world, but then perhaps it doesn’t matter. Walking a landscape, is, after all, oddly dependent on the walker, not the landscape. For a map, the Protean Map is more of a generative tool, a way of the wanderer inventing endless journeys, laid out across their table like the beginnings of some unknown landscape.

Completing the collection is a “history” book, with images of early versions of the game, and a CD of the game and alternate builds, along with an intriguing collection of musical sketches. These are in a wonderfully messy arrangement, without artifice or airbrushing. Browsing them is a little like looking directly onto Key or Kanaga’s hard drive, and walking among the pieces in search of some of the magic that might have animated this unlikely game. But these pieces, like the rest of the artifacts contained in this Artifact Edition don’t form some singular vision. Instead they point off at oblique angles, suggesting roads not traveled, new ideas, and nascent themes. Like Proteus itself, they suggest a landscape, but refuse to make it completely tangible, leaving space between the broad strokes for new ideas to grow.

It is this openness, and the comprehensive nature of the Artifact Edition, that suggest this is Key and Kanaga’s final goodbye to Proteus: After all, here Key is, gathering all of the remaining pieces, packaging them up, and sending them out into the world to wander for themselves, box by box. As goodbyes go, it’s a beautiful one, and a welcome invitation, to wander a little more among the flowers. Or whatever those tootling yellow things are supposed to be.

If you’re lucky, you can grab the Proteus: Artifact Edition for £39 right here. Only 150 were being sold from July 12th.