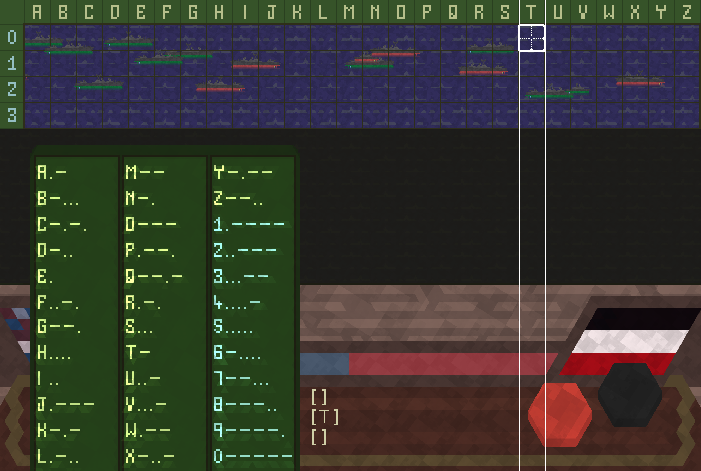 When it comes to war games, shooting is the mechanic of choice. Pulling the trigger has a certain, visceral appeal. There are no intermediate steps: cause and effect revolve around your fingertips. Reality, of course, is more complicated. For every soldier on the front line, there are many more military figures working at a distance. Their contributions are unlikely to be rendered as viscerally, but they still count.

Alex Johansson’s Morse is about the importance—and potential risks—of contributions from a distance. You play as a Morse code operator who, having had enough with merely relaying messages from distance, decides to direct strikes against ground, air, and naval forces. You enter the coordinates of your targets in Morse code, which does slow things down a fair bit—not enough, mind you, to avoid significant bloodshed. The delay simply makes the ongoing conflict more inefficient, like a game of Battleship in which all participants speak in Pig Latin.

What countries are fighting and what about, you ask? Don’t trouble yourself with those matters. They are above your pay grade, or simply immaterial Morse will never tell you. Who are you to question the reasoning of the wartime apparatus? That the only leeway the game’s premise gives you is to fight more is rather telling. This narrative is only headed in one direction.

This narrative is only headed in one direction.

(Let us now pause for a brief note about ‘gameplay’, which is actually something Kill Screen still covers: maybe Morse code is hard; maybe I’m just bad at this game; maybe it’s really difficult. I cannot disentangle this for you, but suffice it to say that Morse-as-click is a more complicated interaction principle than point-and-click.)

Morse’s titular technology may be old-fashioned, but it is hardly a historical game. Its main idea, that decisions made from a considerable distance can have real impacts on the frontlines, has more to do with warfare in 2015 than 1915. Strip out the intermediate layers of complication, and Morse’s protagonist is effectively a drone operator. Heck, don’t strip these layers out; the game practically does that for you. You never see the faces of those who carry out your orders. You never see any faces, actually. War in Morse is a series of mechanical abstractions: grids, vessels, coordinates, outlines. Who, to paraphrase Orson Welles’ The Third Man, would care if one of those little specks stopped moving?

Morse’s salvation, then, is its code. For all the power that you wield in the game—and there sure is a lot of it—you cannot simply make things happen on a whim because Morse code is complicated. Other than “T,” nothing is ever a mere click away. Cadence matters. This, it must be noted, is not a particularly efficient system and helps to explain why we don’t use Morse code anymore. But efficiency isn’t necessarily the goal when it comes to technology with lethal potential. A certain amount of inefficiency can buy machine operators enough time to rethink their decisions. To use a slightly lower stake example, the Washington Post’s Erik Wemple notes that this sort of redundancy is why CNN has an impeccable record when it comes to avoiding prematurely released stories. These added hurdles may occasionally slow down urgent operations, but that may be a tradeoff worth making. There’s little risk of drone warfare—or any form of warfare, for that matter—reverting to Morse code, but the experience of playing Morse is instructive nonetheless.

You can play Morse in your browser.