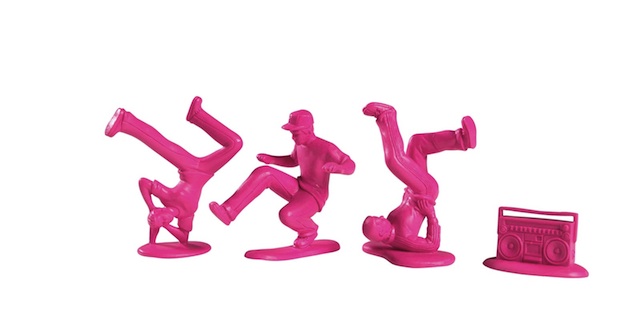 Anyone who pays attention to vinyl toys pays attention to Kid Robot. Founded in 2002 by Paul Budnitz, who now also designs some pretty slick bicycles, Kid Robot specializes in clothing and collectible toys—playful objects meant more to be looked at than played with. So the recent release of their breakdancer figurines, which landed in stores September 16, was a bit of a surprise; these feel more like traditional toys that people actually use in play. I exchanged some thoughts with Nitin Bhargava, Kid Robot’s director of merchandising, about these new designs and whether they indicate an expansion toward more functional toys.

Kid Robot has taken a classic toy, the plastic green army man, and sent him on a head spin, literally and figuratively. In the world of toys, this could be perceived as a significant remix of cultural traditions. What was the connection between green army men and the breakdancing figures? And how much do you generally build on or seek to mutate classic designs?

We like toys—old, new, and current. So much of what we do couldn’t have been done 10 years ago, never mind 75, so it’s great to visit a classic toy production method and give it some new life.

This is one of the first times we’ve really done this in a recognizable, classic-toy way. Given our history, it just made sense to take a look at classic production and content, and see how we could reinvent that in a new and relevant way. We haven’t done too much in this style yet, but definitely love the idea and are looking into doing more of it.

When kids play with army men, they often set up war scenarios and play them out in an imaginative and morbid fashion. Do you expect people to invent those sorts of play patterns with the breakdancing figures?

Honestly, we don’t necessarily know what to expect. We’re excited to see what people end up doing with them. We would be thrilled to see someone put together an ’80s street scene or have them duking it out with robots or something, but we imagine these will be lining more desks than toy chests.

Because there’s more potential to play with these toys than many of your collectible objects, do you see these figurines as standing apart from the Kid Robot toy line?

We think this is a natural evolution of what we do. Though our toys are art-driven collectibles, many of them also serve to lighten the mood and add some color—in drawn-out battle scenarios and cubicle spaces alike.

Many people might say that these breakdancing figures, within the Kid Robot lexicon, are mostly about an aesthetic and selling trendy niche objects. But what else is going on here in terms of an awareness of a cultural function or value?

For a product like this, we’re definitely aiming at something to surprise and delight. There is an aesthetic with its own inherent value; but we feel all our products have more levels than that.

With these, we’re not merging current and classic cultural elements, but actually taking two different classic elements and combining them in a new way. There is definitely a really interesting obvious interplay between dance battles and war—but also taking a fun, pop-cultural element from the most dangerous cities in the ’80s and placing it in a format that has a cultural undertone of violence adds some additional texture. Even the commercializing of breakdance culture like it’s been done for war is somewhat uncomfortable. War toys can be seen as a glorification of establishment violence, and breakdancing can be seen as part of a nonviolent cultural response to establishment neglect. None of this stuff is necessarily good or bad, just uncomfortable and makes the juxtapositions a little more interesting.

In general, we like products that can speak on a lot of levels, but it’s important that the products can be enjoyed on any. Also, we never forget, at the end of the day, they are toys and should be enjoyed.

I predict these breakdancers will be a big seller for Kid Robot both as collectibles, but also as toys in families looking to mix in dancers with soldiers. I mean, who wins that fight?  It’s always going to be the dancers. So, my question here is simply, since these are so cheap to produce, why not think about marketing them to a larger audience of kids who will in fact play with them?

We have always felt there is a very large audience of adults for toy products that’s relatively untapped, and that’s where our primary focus always has been. I’d ask you—given that toys like these for adults comprise a relatively new market, who is to say it isn’t huge in itself?