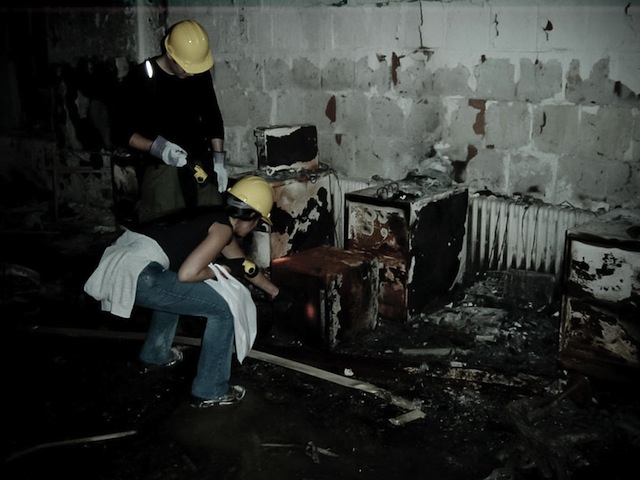 The morning of September 11, 2001, Vassiliki Khonsari was supposed to head to her job at a Manhattan production company, where she worked as an assistant director on a documentary about the best Street Fighter II players in the world. The movie, Bang the Machine, was in postproduction, so Khonsari was going to travel into the city from her home in Brooklyn to continue the long process of turning raw footage into a film.

Then the planes hit the towers, and Khonsari knew she couldn’t go to work. Her office was on Cedar Street, directly across from Tower Two. She got on the phone with Tamara Katepoo, the film’s director, and they both quickly realized that their work of the past two years was in jeopardy. The original sound tapes were stored on site.

“We were in shock and in denial,” says Khonsari. “Aside from the human tragedy, we were trying to find out what would have happened to the office.”

They got their answer the next morning. Two members of the production team posed as animal rescue officers to bypass the police cordon. They made their way to the office of the production company, Jab Strong Fierce. Everything inside was completely incinerated, even the refrigerator that was used to house extra film stock. The digital sound tapes were ashes. Without them, the movie would never be made.

A lot of stories ended on September 11, and it might seem trivial to consider the unlucky fate of a videogame documentary. But Bang the Machine was hardly a trivial project.

The brainchild of Peter “Kaz” Kang, a dot-com wunderkind who is now the executive creative director at Digital Kitchen, the film had a million-dollar budget, unheard of for a documentary with a three-person production team. Kang had a passion for arcades generally – the Chinatown Fair was close to his heart – and Street Fighter II in particular. When he and the filmmakers envisioned a movie about the journey of the best SFII players in America to Japan to play in an all-star tournament, they saw it as more than a simple story. They saw it as a love letter to communal play.

Production began in late 1999, as the team traveled to California to follow the best players in American at a tournament in Sacramento. By the time Khonsari and her coworkers accompanied the American players to the tournament in Japan, they had started to understand the nearly religious feelings the game produced in its devotees.

The meeting of the Japanese and American players “was really enshrouded in this mysticism,” Khonsari says. “There were Japanese players with tears streaming from their face in honor of these [American] guys and their moves”. Which is not to say that the Japanese were inferior; in fact, they dominated the tournament, which was won by the then-21-year-old Daigo Umehara, known internationally as “The Beast” for his skill at the game.

The production team came back with footage that they thought would become a documentary strong enough to compete in major film festivals and attract major distribution. Then September 11th destroyed their sound. The team was devastated.

A VHS rough cut of the movie survived and played at SXSW in 2002. It can’t be distributed legally, however, because it features unlicensed music.

In the last decade, a spate of documentaries about videogames have broken into the culture at large, especially 2007’s King of Kong. Playing what-might-have-been with lost movie might be unfair, but it’s difficult not to do given the thematic similarities with the breakout hit about the quest of an American man to gain the world record in Donkey Kong. Bang the Machine, lost to time, could have been the documentary that brought the arcade spirit to American culture.

“The movie had awesome potential,” Khonsari says. “It looked beautiful, the characters were engaging and they had presence. It would be on Netflix today for sure.”