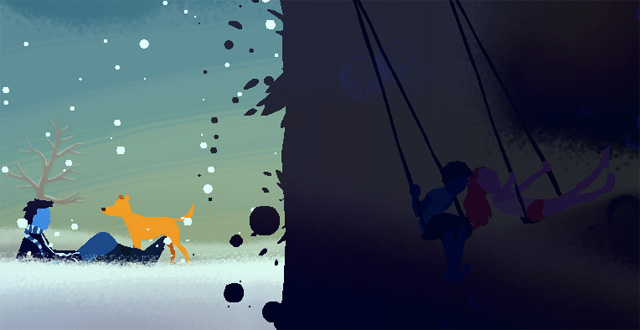 You won’t take arms against it, but you will face a literal sea of troubles in Michael Molinari’s Flash game …But That Was [Yesterday]. An oily, churning wall—seemingly made of memories—blocks your way. Your first objective is to figure out how, by opposing, you can end it.

There may indeed be something of Hamlet in the nameless, faceless protagonist of …But That Was [Yesterday]. This is a game about confronting the past and, as Molinari puts it, “learning to move forward in life.” While certainly less tortured than the Prince of Denmark’s, our hero’s path forward will also require him to relive the trauma of loss. He, too, lives with ghosts.

Told in a series of short vignettes, the wordless story plays out in three acts, each exploring a different type of loss. Walk through a snowy landscape with your dog; leap across rooftops with your friend; swing into love with your girlfriend. The joy of discovering your connections with these characters is tempered by the foreknowledge that you’re going to lose them all.

The palette signals shifts between two types of sequences. You relive memories in vibrant color, with bright, warm shades being more prominent during happier times. Later, you mirror your actions in these sequences inside a stark black-and-white dream world, where surfaces are fuzzy and the background is blurred.

Molinari uses music to similar effect. Each time you enter the dream-world sequences, the main theme grows more complex. Listen for the additions: a bassline in the second instance of the riff, a drum track in the third. This layering effect illustrates the protagonist’s growing ability to move beyond loss. There’s a remarkable degree of subtlety at work.

Through a series of prompts, other characters teach you the basic actions you’ll need. Player input is limited to the arrow keys, which control a small set of movements—walking, running, jumping, swinging, standing up, sitting down. Yet Molinari makes the most of these simple commands. Standing at the coffin during a funeral scene, for example, a right-arrow icon beckons you away, though it’s clear you’re not ready to say your final goodbye. The prompt itself forces players to think about the emotional weight of their actions. And that’s as it should be. Moving on from loss, after all, requires action. Just ask Hamlet.

Because of the minimal input and lack of player choice, …But That Was [Yesterday] may feel more like an interactive movie than a game. There is no way to fail other than closing your browser window. It’s understandable that some players will be turned off or distracted into a discussion of semantics: Is this truly a “game”?

The bigger issue with …But That Was [Yesterday] is that its three explorations of loss are not equally affecting or interesting. The dog vignette seems truncated, with no explanation of how the dog was lost. The type of loss explored in the girlfriend story feels trite after witnessing the powerful friend story. The game has multiple possible endings, but the ending you get is dependent on the time on your computer’s clock—not on any action you take. Further, each ending dilutes the impact of the other two stories, and none of the endings does justice to the complexity of emotion portrayed in its respective vignette.

Still, it’s easy to understand why …But That Was [Yesterday] won first place in the 9th Casual Games Design Competition. It’s a polished, clever piece that makes spare but effective use of game mechanics to convey its message. It’s also Molinari’s most sophisticated effort to date, a promising effort from a talented young designer.