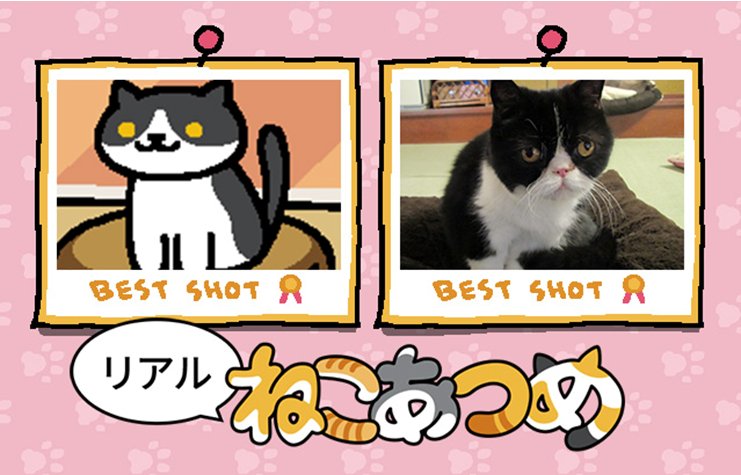 We don’t need an excuse to talk about cats here. Cats are a pretty big deal. We have a “cats” tag and it’s probably the most valuable thing we’ve got. That is, before we set-up our sister site Kitten Screen and take over th– okay, that’s not actually happening (it is in my dreams), but a “Kitten Screen” is actually why you’re here.

This week has been declared “Game Week with Google Play” in Japan. And part of that involved celebrating one of our favorite videogames from this past year: Neko Atsume. You know what developer Hit-Point Co. did? I can hardly believe it. They had a 11-hour live broadcast of a real-life version of the game set-up inside Osaka’s “Neko no Jikan Kita-honten,” which is the first cat cafe opened in Japan. It was called “Real-Life Neko Atsume.” What else?

Hit-Point went to some unnecessary but admirable efforts to ensure that the room it all took place in appeared similar to the one in Neko Atsume. There’s a yellow bowl, a green rucksack, a toy fish, a large cat playground, even a large television that will never be watched. They even made sure that the same breeds of cats that appear inside the game would be in front of the camera, with no exceptions.

one of the few videogames to transcend language barriers

On top of that, those that tuned in live either on YouTube or participating over social media on September 15th were able to influence which of the “cat-enticing goods” were made available in the room. This included rubber balls, yarn balls, and cardboard boxes. They could have put a cardboard box and some water in an empty room, shoved two cats in there, and let us tune in, and we’d probably be just as happy. Don’t they know that?

To be fair, Hit-Point probably hasn’t been able to understand much about the success of its game. It’s a small company that made a cute cat game and threw it up on the app stores to see it suddenly blow up on its own accord. And what’s remarkable about it is that this popularity wasn’t exclusive to their home nation of Japan but spread rapidly to the US and other parts of the world. That’s surprising because the game is only available in Japanese. If you don’t understand Japanese then you’ll need this guide in order to be able to play it.

This makes Neko Atsume one of the few videogames to transcend language barriers (without being localized) and gain huge popularity. And why wouldn’t it? The experience of being a cat owner is universally identical. One moment the cat loves you, can’t get enough of your hands, your succulent tins of moist tuna. Then they turn over onto their backs, presenting an irresistibly fluffy belly, all to lure you in for a quick scratch across the skin. They are lovable tykes that squash themselves into any box-shaped device they can find, popping up unexpectedly with a sleepy head, or a rapid paw when you get home from work. It seems only right that Neko Atsume‘s popularity was as unpredictable as a cat’s next resting place.