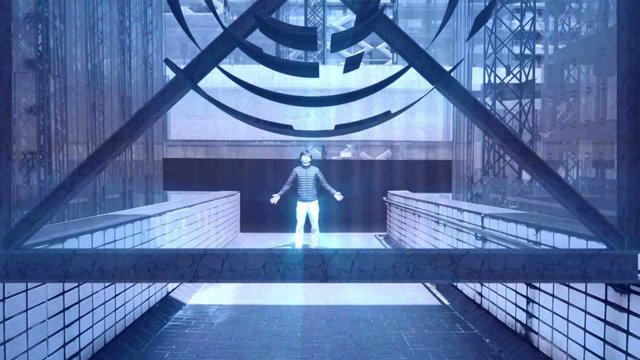 The brutalist architectural structure, known for its dramatic and imposing characteristics, lends itself to re-approriation as a game space according to Mascarenhas. As he explained in an interview with T-R-E-M-O-R-S, the area around the Barbican “has these elevated walkways, which are very underused for a central London location. It is a very unique space that is completely undervalued, and is suited to re-appropriation without physically transforming it.”

The video presents his vision for an augmented reality game that still remains only in the proposal stage as of yet, though Mascarenhas already completed a more simplified boardgame version to test out the rules. The goal of the game mirrors Mascarenhas thesis exploring architecture’s relationship to play, or the “game” that many construction industries must play in order to make their mark on cityscapes. Barbecana consists of multiple players exploring the elevated walkways in search of virtual architecture pieces. The player who can build the longest, tallest bridge structure wins.

“Architects battle it out everyday for their visions of the built environment to be made reality,” Mascarenhas explains, expanding on the game’s overarching metaphor. “These battles produce areas which are saturated with architectural language as each architect produces and designs forms and idioms that attempt to stand out on their own rather then sing together.”

Augmented reality might serve as something of a solution to these over-stylized and underused structures.

The Barbican Estate, a project full of ambition but perhaps a little blinded by the stylistic trends of its time, is a perfect setting to expose how the architectural arms race detracts rather than adds to successful urban planning. Augmented reality might serve as something of a solution to these over-stylized and underused structures, by virtually re-appropriating them into a more human context. “It could add a hidden and highly personalized layer to the city,” Mascarenhas hopes, “causing people to move through and view it in entirely different ways.”

To create his video proposal, Mascarenhas used a combination of 3D modeling programs (Rhinoceros and 3DS Max) along with live-footage of the space and additional Adobe After Effects. Mascarenhas also speculates that in the near future, the relationship between architecture and games won’t only be relegated to metaphors. “In the coming decades, the influence of computer games is set to become more and more prominent, which is clear by simply seeing how in recent years the computer games industry has eclipsed movie and literature industries in size, worth and popularity.”