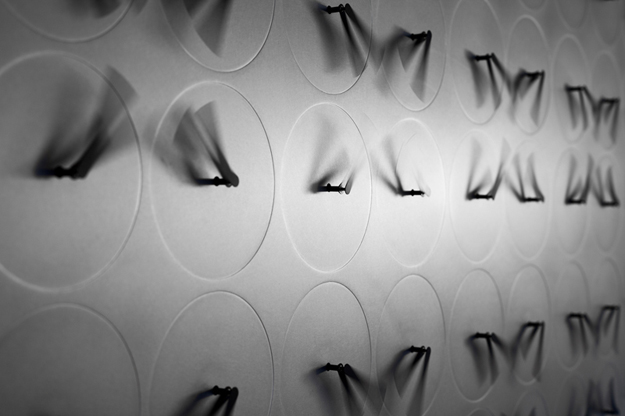 When it comes to clocks, it seems there are only two options: Digital or Analog. But what about a third variety? Humans Since 1982, a Stockholm-based design studio comprised of Per Emanuelsson and Bastian Bischoff, have created a clock that is unlike any other. It’s called “A Million Times,” which infuses analogue clock arms with engineering and mechanics to create something extremely special.

Using 288 analogue clocks, the original work uses an iPad to create a series of mesmerizing visual patterns. The creators manage to turn a collection of unassuming analogue clockfaces into a fully-functioning digital clock. Since the first version came to light, the duo have also worked on a number of variations that build off the theme of a kinetic clock face.

Here’s how the creators describe their project on the video page:

With this kinetic installation, Humans since 1982 present clocks as objects unleashed from a solely pragmatic existence. Locked in its functionality to show the time, the natural character inherent to an analogue clock with its two arms constantly dancing in slow motion around the center, unveils hidden figurative qualities without denying its primary purpose.

Per Emanuelsson and Bastian Bischoff first met while they were both taking a Masters course at Gothenburg’s School of Design and Crafts. They have been based in Stockholm since 2010, and their studio’s name comes from the fact they were both born in that year.

Humans Since 1982
The Fox is Black