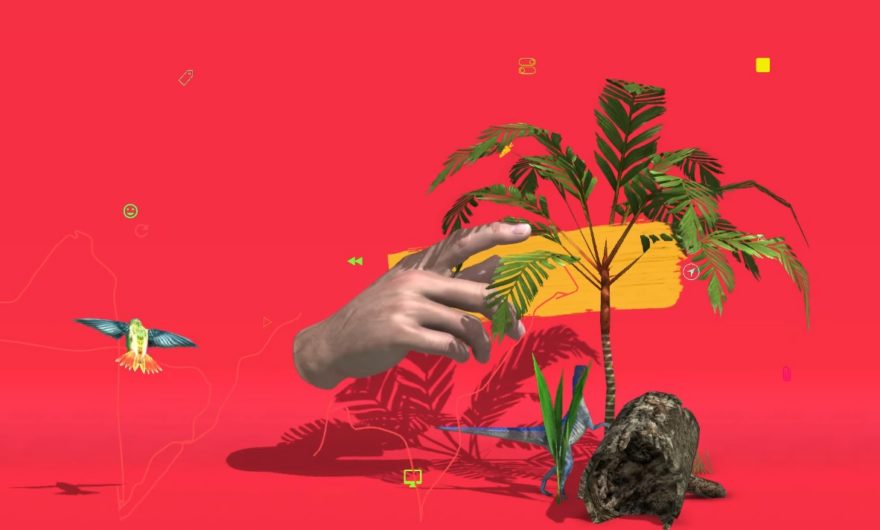 A bodilesss hand floats sideways through a knife. The knife swings wildly to dissect a watermelon, cutting it into ever smaller chunks, until all that’s left is juicy debris in zero gravity. An explosion. Large rocks fall. A humming bird appears, flapping wildly, then it disappears. Another explosion. Over the next few seconds, a small dinosaur, a chicken, and a creature made of pink intestines will each spend a second on-screen. It’s fair to say that WTF is the first reaction you’re going to have to “How To Everything.” There is a lot going on and no chance of a narrative to guide you through it.

“How To Everything” is a live simulation performed by Greek digital artist and game maker Theo Triantafyllidis—he previously made a chaotic videogame tribute to French architect Le Corbusier, as well as a bunch of other wild projects. Until December 18th, it’s on display as an exhibition titled “A Mountain Made To Look Like A Person Holding A Knife” at the Sargent’s Daughters art gallery in New York.


As far as I can tell, the best way to make sense of “How To Everything” is to see it as an artwork from a parallel world, one where humans no longer exist and the computers we have left behind start to piece together their own version of reality. This is the narrative that the notes accompanying the exhibition outlines. It goes on to describe what these unmanned computers carry on to do: “Fragments of today’s internet culture are treated as archeological finds that are repurposed to fit the needs of artificial life. Youtube ‘how to’ videos, trompa-l’œil, videogame artifacts and computer graphic demos inform this new language of painting, hopping around the uncanny valley. The result is a never-ending orgy.”

the computer desperately attempts to find something to cling to

The actual process that goes into making this live simulation reflects this narrative. Triantafyllidis uses the computer’s archiving algorithm to endlessly create new virtual objects, giving a “physical presence to digital information.” The point of this is to, as Time Out brilliantly put it, offer “a phantasmagoria of images reflecting on the relationship between virtual reality and the physical world it tries to emulate.”

Triantafyllidis considers “How To Everything” as a reference to vanitas, which were still life paintings popular in the Renaissance period in Europe, which use imagery to allude to the transience and fragility of life. Skulls, mirrors, and poppies often featured in these paintings and so Triantafyllidis has included these objects in his screen simulation. “The works are a playful nod to the tradition of still life paintings as self-contained narratives frozen in time, driven by the symbolism imbued to everyday objects,” reads the exhibition’s notes. “They are governed by the rules of intelligent artificial life and constantly reminded of their imminent destruction.”

What you’re seeing in “How To Everything,” then, is the supposed technological equivalent of a human-made vanitas. The chaos of the simulated objects is a visual manifestation of the panic of an artificial life as it is faced with the concept of mortality. Without human interaction, the computer desperately attempts to find something to cling to, constantly trying to output a still life that represents its feelings as it moves towards death.

Find out more about “A Mountain Made To Look Like A Person Holding A Knife” on its website.