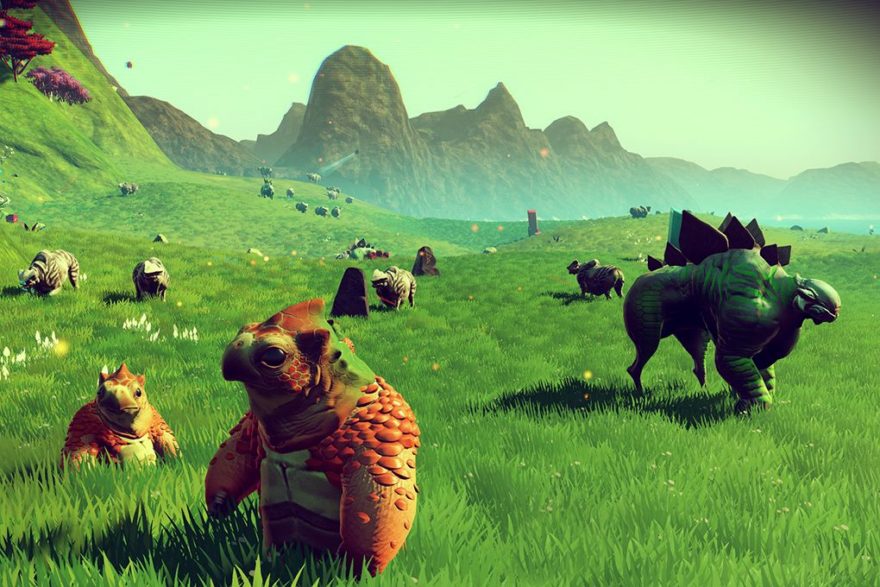 No Man’s Sky feels like the game that keeps on giving. Before even reaching its long-awaited release date it has managed to capture imaginations with both its improbable construction and the mind-bending problem solving of its creators at Hello Games. Perhaps it has been because its talented team, in particular art director Grant Duncan and programmer Innes McKendrick, as well as figurehead Sean Murray, have been so eager to share their solutions with the world in a series of talks that all deal with the same issue: how do you maintain artistic control in a near-infinite game world?

First there was Duncan, who at GDC 2015 told the world how he used an army of robot drones to capture animated GIFs of the quintillions of planets in the game so he could canvas their aesthetics. Then came a talk from McKendrick at Nucl.ai where he explained the mathematical formula that allowed Hello Games to create worlds that had undergone hundreds of years of erosion without ever modelling that process. Meanwhile, Sean Murray and his ever growing beard have been stalking around casually explaining astounding things, like the way every star in the game’s night sky is an actual visitable place or simply taking whole rooms full of people to planets that no living person has seen before. Though they may have been accused of opacity in relation to the gameplay of No Man’s Sky, it’s hard to make the same accusation in terms of the access Hello Games has provided to their development process.

there is something heartwarming about watching Weir

Now it’s the turn of audio director Paul Weir to enlighten us on his approach to scoring an infinite universe, in a talk from this month’s Sónar+D conference in Barcelona. A pioneer in procedural audio, Weir is quite the evangelist, and despite his softly-spoken approach it’s hard not to be convinced by his work. While the full presentation is a fascinating insight into the field, I’ve selected the best moment for those unwilling to sit through an hour of developer chat. Namely Mr. Weir using his custom software “VocAlien” and a tablet to perform the voice of an alien creature live. Have a watch:


Maybe it’s just me, but there is something heartwarming about watching Weir, clearly a tinkerer and a perfectionist, shift his tablet around with the utmost concentration, and, remarkably, producing creature sounds that even Skywalker Sound would be happy with. The fact that the “energy” of the creatures’ voices is performed like this by Weir for each archetype and then captured to be fed into the game, only makes it more fascinating. That means that every one of the game’s near-infinite creatures has been performed by this one, slightly hyperactive, elegantly attired man from Liverpool.

Perhaps, in the end, that is the attraction of the odd tales and herculean achievements of the development of No Man’s Sky: Everyone involved seems to be distinctly down to earth and yet unshakably focused on the integrity and quality of the game. A bunch of geeks, in the best possible way. And the result? Well, you just have to listen to Weir demoing the music system, filled out by performances from the band 65daysofstatic. Paul Wolinski, a band member and self-professed geek, has clearly been converted by Weir, stating in a recent interview that “10 years down the line […] It’s gonna be a case of making algorithms to make music rather than making music itself.” And as Weir’s demo reveals, this is an exciting future to be approaching.

Even in the less-than-ideal recording, a rich sense of atmosphere and narrative pervades, conjuring a game world we have yet to see. Backed by Weir’s infectious sense of excitement, the whole thing is artistically rich and yet distinctly human. In a world of PR bluster and back-of-the-box bullet points, that feels like a gift to me.