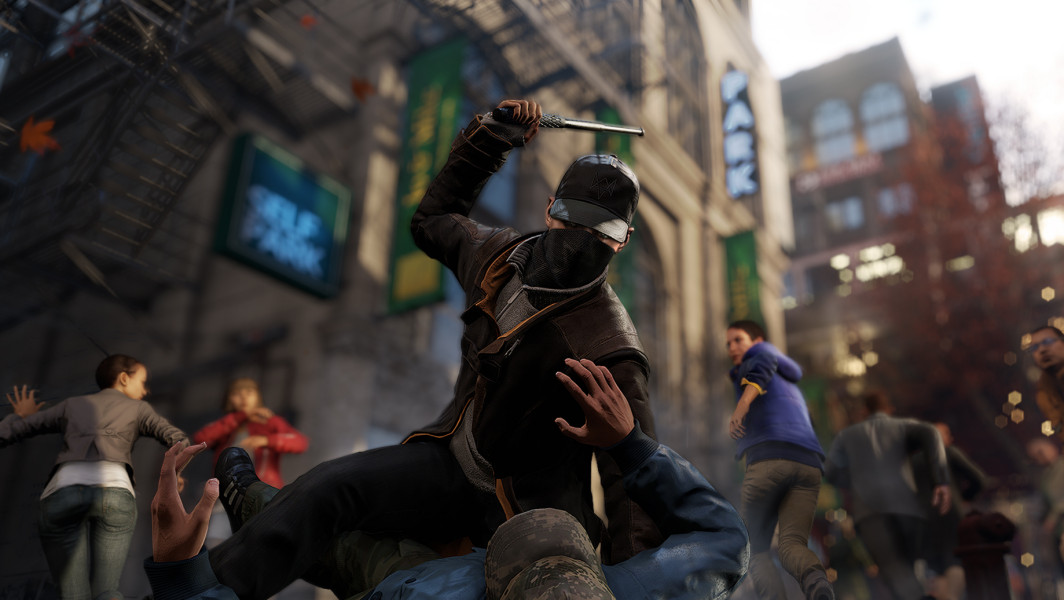 When Watch Dogs was first being discussed at Ubisoft, 5½ years ago,  Creative Director Jonathan Morin and his team knew a couple of things. They knew they wanted to explore the idea of hyperconnectivity in the modern world, and they knew wanted to make a game which promoted systemic, emergent play. While considering what they expected games to be like half a decade into the future, they realised they could use online features to do both of these at once. What better way to present the advantages and disadvantages of living in an always-connected society than through features that could only exist over an internet connection?

A lot has changed since they started developing the game. For one, smartphone adoption has continued to skyrocket, from an installed base of roughly 4% of the global population in 2008 to 22% at the end of last year. But working at a tech company allowed Watch Dogs’ team to anticipate this growth.

“We work in a Ubisoft building of 2,800-plus people that love technology so a lot of people were having those phones very early on,” Morin says. The game takes place in a world where everyone is so absorbed in the advantages of technology that they fail to see the downsides. Only protagonist Aiden Pearce can “see beyond the technology everybody uses,” Morin says. His smartphone allows him to alter the world around him for his own benefit. Yours, if you download Watch Dogs’ companion app, can be used to interfere with the worlds of other players, sending the police after them or sending them messages.

The emergence of smartphones also made the team realise that people’s connections were becoming a lot more seamless, that boundaries were being erased and most games weren’t keeping up. The connectivity of a smartphone allows you to be in a few places at once, but it’s the ease of use that makes you actually bother. Connectivity in games, according to Morin, had become stuck in the past, hidden behind separate menus and long waits for a reliable server. He says the average person “is more connected in real life than the most hardcore player is in a game … [Players] are probably ready to accept the same thing in games as long as we make it as simple as possible.”

The few games that have already featured this subtler multiplayer have turned heads. Watch Dogs borrows Demon’s Souls and Dark Souls’ invasion mechanic, where a hostile player can unexpectedly appear in your “single-player” experience. Morin calls it “a whole new way to interact,” but the feature took a while get right in Watch Dogs. “We spent a lot of time trying to convince players that it was an actual player.”  Testers would just think that the AI was acting weird if they weren’t told about the feature before they played, even if the other player’s gamertag appeared to tell them they’d been invaded.

When players’ games are interfered with via the app or invaded, they go from a position of power to one of vulnerability.

Morin says it was important not to just borrow seamless multiplayer ideas because they worked well in other games, but that they need to make sense in context. “It was very important to us to make sure we find a meaningful way to tie in what we want to explore … with the gameplay itself,” he says. They needed to fit into the themes the game explores and also the narrative that Aiden follows.  When players’ games are interfered with via the app or invaded, they go from a position of power to one of vulnerability. For most of the game, they’re the one exploiting technical vulnerabilities (“hacking”) for their own gain, but when you come across people with the power to use the technology against you, Watch Dogs wants you to question the wisdom of this always-connected world.

The narrative reasoning is equally interesting. It wouldn’t make any sense if Aiden Pearce spent these sections fighting off doppelgangers, so each player’s opponent appears as one of the city’s pedestrians, while the invaded player still look like Aiden. The invading player is told she is going after a criminal and solving a problem by hacking into another’s game, while the invaded player is told that she is being attacked by a criminal and needs to protect herself. “It creates a very interesting perception wall that we have to debate a lot about,” Morin says.

Morin clearly hopes and expects that seamless online play will play a big part in the future of games. “We knew we had to find a way to make players understand [the possibilities of meeting another player] so that in the future we could go a lot further along.” And he has ideas for the future too. “You could actually—sorry to say it—lie to the player: pretend the individual in front of them is a scripted event when in fact it might be a player in another game doing something else which is narratively different to him, but suddenly both players are feeding content to each other.”

The impression I get is that Morin is much more interested in integrating the broad theme of hyperconnectivity into a systemic, emergent world than he is in the nitty-gritty of Aiden’s story. After working under Clint Hocking on Far Cry 2, he says they share many of the same design philosophies. “When we do a game it’s almost like doing a musical instrument that you give to the player,” he says. Give the player the tools to solve a problem, and the solution she comes up with will be much more fulfilling. Morin hopes this is just the start for games that play with our expectations in exciting ways; perhaps Watch Dogs is the game to convince everyone else that they can lie to players, too.