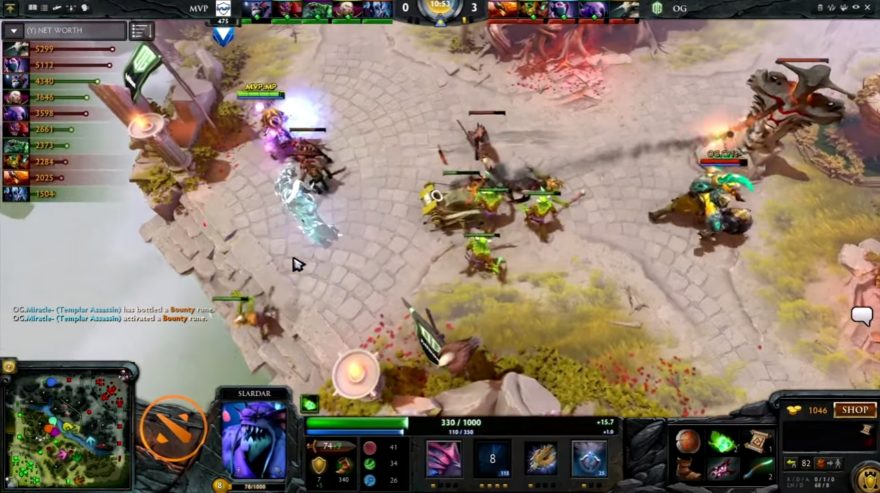 Perfection is a rare and beautiful thing in Dota 2 (2013) no less than any other competition. In terms of prestige, a flawless game in Dota 2—by which I mean a game in which the winning team destroys the opposing team’s ancient without suffering a single death—ranks up there with a hole-in-one on a par five or a perfect nine inning outing in baseball. It’s really, really rare. Entire careers will transpire without ever being involved in one. To wit, elder Dota 2 statsman Ben “Noxville” Steenhuisen estimates that perhaps a dozen have occurred in thousands upon thousands of professional matches since 2011.

OG sparkles amid this systematic chaos

When a perfect game does happen, it’s usually because a lower-tier team has the misfortune of getting matched against an elite squad. Among meetings of premier teams, perfect games occur with the periodicity of Earth-threatening asteroids. But hallelujah did we get one a couple weekends ago at the Manila Major! The multinational superteam OG—an unknown acronym, but popular speculation includes everything from Oedipal Gamers to Ocular Ganja—utterly disassembled the South Korean outfit, MVP Phoenix. A serious contender even under the worst of circumstances, MVP nevertheless suffered 25 straight deaths with no rebuttal before throwing in the towel at 25 minutes.

It’s a textbook OG beatdown, built of batshit insane dives, action movie escapes, and a characteristically virtuosic performance from midlaner Amer “Miracle” Al-Barqawi (can anyone seriously claim that this guy is not the best player in the world, possibly ever?). OG sparkles amid this systematic chaos, orchestrating their victory with a degree of precision and speed that suggests telepathy was somehow involved. Take this one vignette for example: the coordination needed to save Franck “Cr1t” Nielsen’s Elder Titan from certain death during the way-behind-enemy-lines skirmish around 11:30 is… well, it’s on some Saving Private Ryan-type level.

Anyway, just watch it for yourself:

OG went on to win the Manila Major, bagging $1.1 million and establishing themselves as the favorites going into The International 6 in August.