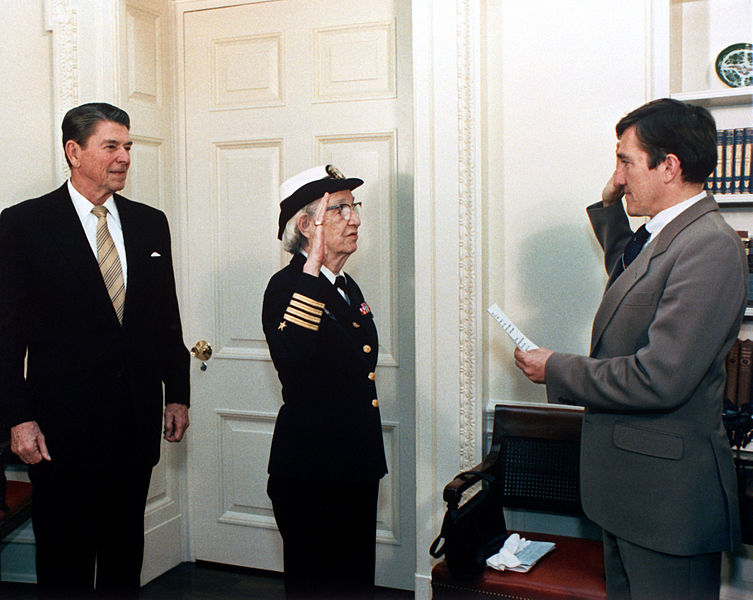 The often-overlooked history of female coders who defined early computing during WWII seems finally to be gaining some mainstream recognition. Presumably inspired by Walter Isaacson’s latest book, The Innovators: How a Group of Hackers, Geniuses, and Geeks Created the Digital Revolution, the forgotten names of tech trailblazers like Ada Lovelace and Grace Hopper are making their rounds in news media since last October. From NPR to Tech Crunch, outlets took the opportunity to re-educate audiences, and challenge contemporary notions about the more recently male-dominated field of computer science.

Last week, the data and stats-oriented journalism blog FiveThirtyEight released their short documentary film Queen of Code as part of the Signals series with ESPN Film. Directed by actress Gillian Jacobs (who plays Britta in Community), the 16-minute documentary celebrates the indispensible influence of computer science pioneer Grace Hopper. “You probably don’t know the name Grace Hopper,” the description begins, “but you should.”

“You probably don’t know the name Grace Hopper, but you should.”

In the 50’s, the pioneering computer scientist Grace Hopper was one of the first to champion the idea of more accessible computing languages. “I felt that there was a large number of people in the country who did not like symbols, weren’t mathematicians, and hated numbers,” she explains matter-of-factly in the documentary, before giving a small, sly smile. “So, let them write their programs in English—it was common sense.”

Grace Hopper worked on the first automated computers ever, invented the terminology “debugging,” headed the creation of one of the most influential programming languages in computing history, and remained an active duty Admiral of the godamned US Navy until the tender age of 79—when she involuntarily retired (before continuing to work until the day she died in 1992 as a highly sought-after consultant elsewhere.)

Grace Hopper is like G. I. Jane levels of badass—if G. I. Jane had been around to help run the world’s first computer, that is. She even went on Letterman for a post-military retirement interview, during which she delivered a diatribe against the annoyance of pantyhose (#civillianproblems) on national television.

Grace Hopper is a national treasure, plain and simple. She should have her own action figure, movie franchise, and official LEGO set (bootleg available on Etsy.) So why then, the Queen of Code documentary asks, do we only ever talk about Steve Jobs and Bill Gates? Just last week they announced the newest cast members of yet another Jobs biopic. So for the 107th time, we can all enjoy speculating about whether or not [insert famous actor here] will go bald for the role. Where’s my Grace Hopper biopic starring Glenn Close? Why are the women who shaped modern technologies relegated to an interesting factoid or news story—an asterisk rather than the widely renowned role models of computing history?

After introducing Hopper’s enormously significant contribution to the field, the documentary shifts to a more personal angle, capturing her idiosyncrasies and magnetic charm. It humanizes Hopper in a crucial way, making her feel real and tangible to a generation of potential female computer scientists who sorely need more badass role models like her.

At one point, however, a few interviewees in the documentary almost apologetically brush aside Hopper’s notoriously un-feminist attitude toward gender inequality in tech. Hopper never really took to (or as one interviewee calls it “identified with”) the women’s liberation movement that came “after her time,” and never acknowledged her sex as an obstacle in her career.

While the documentary feels the need to excuse this detail by chalking it up to a generational gap, there’s something to be said for the fact that Hopper viewed her profession as genderless. Throughout the decade before her passing, Grace Hopper lived in a world where 40% of the people majoring in computer science were women (which went down to 14% by 2014). She entered the field at a time when men were off busy fighting WWII, so in reality her gender actually helped her jump-start a career.

Though the documentary somewhat paints her un-feminist perspective as denial or oversight, it might instead be viewed as proof that the crippling gender divide in tech today is more mutable than we tend to believe. As the computer science profession rose in popularity, respectability, and even celebrity after her passing, fewer women felt empowered to pursue it. But when we value spitfires like Grace Hopper and the moment she helped make in history, we remind people of what diverse and open-minded atmospheres can do for innovation.

You can watch The Queen of Code for free on FiveThirtyEight’s website.

Images via Misbehave and Wikimedia Commons.