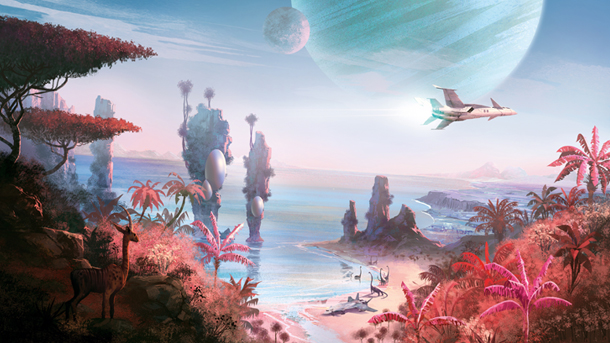 As we’re reminded in this mini-documentary, No Man’s Sky’s universe will be approximately the size of God. Here, project lead Sean Murray of Hello Games talks headily about how the game will let you discover a universe with a limitless number of planets the actual size of Earth. This sounds great from a “look at what our computers can do” standpoint, but won’t exploring infinity get old?

But don’t be so skeptical. Towards the end of the video, Murray reveals some new details on how the game-y bits will work, and there is very much a point to it aside from drifting through AI-generated clusters of universe. There is actually an overarching mission. Players will start from their own respective planets and proceed to level up their ships until they are strong enough to make it all the way to the center of the galaxy, where something epic is promised to happen, though he isn’t saying what.

But you are also free to ignore that and seek out your own remote niche of the universe if you so choose.