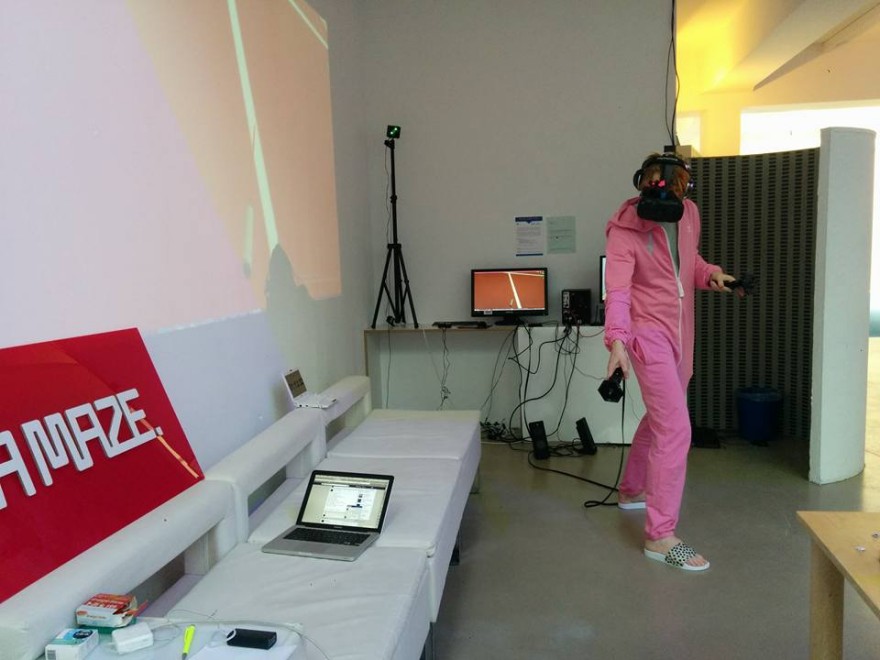 How long have you spent inside virtual reality in total—an hour? Two hours? 24 hours? It’s probably only a small number of hours as it takes quite the toll on your eyes and brain. And that’s if you don’t get the infamous nausea it brings on for a lot of people. But heck, try telling that to Thorsten Wiedemann, who is currently at the beginning of a performance called DISCONNECTED that will see him spending a total of 48 consective hours inside virtual reality. As the description says: “No human being has ever spent such a long time in computer generated Virtual Reality without sleep.”

Not only that, but the whole thing is being livestreamed on YouTube—you can tune in right here (or down below). It’s taking place at the Game Science Center Berlin and the livestream gives you a clear shot of Wiedemann scooting around on the floor (and sometimes resting on the sofas) as well as a projection of what he’s seeing through the headset on the nearby wall.

With the help of VR experience designer Sara Anna Lisa Vogl, who is updating the performance’s page and providing tech support, Wiedemann will be playing a range of virtual reality games over the next several hours. During the interim as games are exchanged he closes his eyes so as to not escape back into our reality. And if you’re wondering, yes, he has a place to relieve himself just off-camera, but he’ll still be doing so virtual reality.

According to the performance’s description, the idea of it is to give us a taste of the future, in which it is predicted there will be “VRShamans” who curate trips into virtual reality for so-called VRNauts, looking after their health and safety while they attempt to embody a prolonged digital existence. Vogl and Wiedemann are the actors in this imagined scenario brought to life for us to watch.

attempt to embody a digital existence

Oh, and by the way, Wiedemann is the founder and director of the international label A MAZE. which celebrates independent and alternative games through festivals, exhibitions, conferences, workshops, and more. It’s in attending the A MAZE. Indie Connects festival held in Wiedemann’s hometown of Berlin (and in Johannesburg, South Africa) a couple of times that I’ve met him. And having done so, getting acquainted with his flamboyant dress sense and always-on party head, finding out that he’s now throwing himself inside virtual reality for so long doesn’t surprise me all that much. It’s very him.

In fact, I don’t think I’ve seen a photo that sums his entire personality up as well as this one—check out those flip flops: