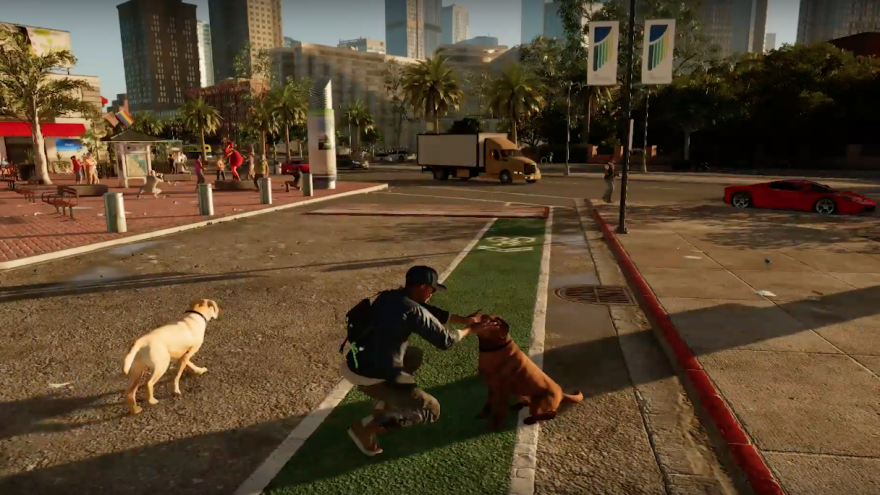 If there was anything missing from the underwhelming Watch_Dogs (2014), it was actual dogs. Luckily, bright and early Wednesday morning, Ubisoft hosted an unbearably long livestream cataloguing the details of its hardly-anticipated sequel, Watch_Dogs 2 (most of which was appropriately leaked—via premature ads—ahead of schedule). And guess what? It finally played up the single feature that we’ve all wanted from the beginning: legit dogs. Pettable dogs, even.

By my eagle-eyed count (and watching the 18-minute broadcast on mute due to not really caring too much), 10 dogs total pounce onto the screen at some point, all within the mix of cinematic trailers and good ol’ direct game footage. In most cases, it’s just three different action shots of presumably the same dog, reacting to drones or whatever techie junk this game has. But a dog is a dog. And all dogs should exist for Marcus—Watch_Dogs 2’s new, surprisingly non-white main character—to pet.

The first dog, possibly a chocolate Watch_Labrador, appears to be walking completely lackadaisically (leash free!) in the most touristy district of San Francisco. This particular pup is carefree and completely unaware of the nearby looming threat of the terrifying Bush Man. I hope the dog is careful. There’s also a gross-looking dude with a goatee and a touristy Golden Gate Bridge-emblazoned tank top. I hope the dog bites him.

Our second mutt is even cuter, but looks to be yet another Labrador (maybe with a slight mix of a Rottweiler). This fella barks at the camera, obviously a showmanship of Ubisoft’s new and improved dog drool physics. In another shot, our new Watch_Labrador_Maybe_Rottweiler pal runs like it’s got somewhere desperately to be. Maybe it sees Marcus in the distance, ready to reach down for a pet.

Next up is a German Shepherd (finally, some breed diversity) hanging out with some seedy police officers. This Watch_German_Shepherd exerts loyalty, strength, and most important of all, curiosity. Its ears perk up as Marcus scoots his drone closer. This tough canine isn’t afraid to show fear when there’s a nearby explosion, probably worried about its owners’ safety. After seeing this heroic dog’s plights, I hope it eventually sees the light and abandons its police officer owners, joining Marcus and his league of other casual canine acquaintances.

The final dog in the Watch_Dogs 2 announcement presentation, not counting the incessantly barking and bay-stenching sea lions (or “sea dogs”) at the top and bottom of the video presentation, is a yellow Labrador. This yellow Lab gets startled as Marcus rolls up on it with a drone (poor baby), and even shows up once more at the familiar Pier 39. This little dog gets the least amount of screentime out of all the others. But its yellow coat still shines golden, like its soul.

San Francisco is often touted as a city that’s dog population outnumbers its children population. So, truthfully, I can’t think of a better city for Watch_Dogs 2 to finally embrace its avid dog-appreciation. Even if 90 percent of the dogs are unrealistically Watch_Labradors and never on a leash. Peace.