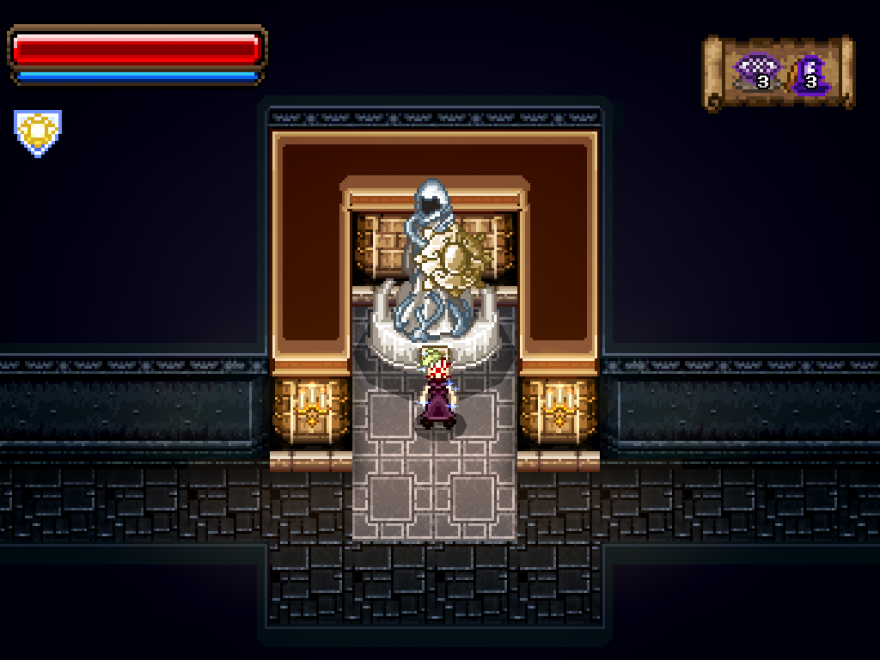 Every game asks a question. “Where’s the princess?” (Super Mario Bros). “Will it fit?” (Tetris). “Can you find my sister’s enchanted boots?” (Elder Scrolls). Rocketcat’s Wayward Souls, much like its sadistic cousin Dark Souls, asks simply, “What’s for dinner?” The answer, of course, is you.

At the heart of Wayward Souls is its extraordinary appetite. Everything must die: zombie dogs, furniture, plucky heroes. A hefty warrior tenderizes the soft flesh of my mage with a ball and chain on the fourth floor of Amaranth Keep. On the same floor, my agile thief feints left only to be flambéd to a crisp by a resurrected gargoyle. The game is relentless in its pursuit of the player’s swift and ignominious demise; to cheat death and then reap the rewards becomes not only addictive, but instinctual. Put another way, Wayward Souls reduces us to our Darwinian roots: kill or be killed.

I’ve got to come clean: I absolutely suck at Wayward Souls.

After myriad deaths, which swiftly establish the dog-eat-player brutality of the game, I order a new hierarchy of appetites within myself. No longer is it enough to clear a room of enemies and move on deeper into the dungeon; I must search each floor for a weapon-upgrading forge, or gold I can spend on persistent character upgrades. My thoughts are dominated by simple commands to kill, break, take, until each inevitable death. The game is a war between competing instincts: do I satisfy the urge to explore the remaining map, which may contain a crucial enhancement, or do I conserve my strength and proceed to the next floor?

I’ve got to come clean: I absolutely suck at Wayward Souls. After logging countless hours with each of the four characters I’ve unlocked, I have yet to break past the game’s mid-point boss at the apex of Amaranth Keep. No matter what kills me, however—be it a fire-breathing gargoyle or possessed tome—I keep coming back for more. Though I initially blamed Stockholm syndrome, the more I return to Rocketcat’s latest game, the more I’m convinced that there’s something genuinely delicious wrapped within the labyrinthine confines of each freshly regenerated dungeon.

The game is a mélange of idiosyncrasies. At the center, of course, is the game’s taut, carefully balanced combat in which a single misfire can spell death. However, the peripheral elements pull much less weight. The writing in the game’s laborious cut scenes could do with a fraction of the imagination in the sound design or graphics, while the moody color palate and ghostly tragedians indicate Rocketcat wants us to take this all very seriously. Yet the game’s aesthetic is actively sabotaged by odd moments of light-heartedness (a robot butler named Humphrey, whimsical goblin-squabbles, unlockable trucker caps). It’s the closest we’ve got to Dark Souls for iOS, if Dark Souls had more silly hats.

Which is to say: if it were judged solely by its story or wonky aesthetic, Wayward Souls would sorely disappoint. The point of the game is to be played compulsively. Each playthrough gleans new insights—either on the best way to kill a certain foe or how to survive the occasional labyrinth—until the player has learned enough to decisively earn a victory, much the same as in Tetris or a 10k run. The carrot on the stick is victory, but the point of the whole thing is to nail a perfect run in good form.

There’s a kind of poetry in survival.

The fact that Rocketcat have so aptly nailed the ratio of bitter to sweet is an achievement unto itself: rarely does a game as punishing as Wayward Souls bear up so well under repeated playthroughs. This is due, in part, to the game’s randomly generated dungeons, and the way in which fresh rooms and enemy configurations are subtly stirred in. Almost any encounter (except, perhaps, the occasional flash-mob of goblins) can be survived if not deftly handled, and it is the collective weight of survival, strategy and victory that makes the experience worth the many expletives it will inevitably elicit.

There’s a kind of poetry in survival. In games, as in the wild, it can be massively satisfying to watch the prey outwit the predator. My warrior breaks the shields of three footsoldiers with a power attack, spins to parry a thief, and raises his guard in time to deflect a cindery bullet from the encroaching gargoyle. The game asks me, bracingly, “What’s for dinner?” and my answer through clenched teeth is “Not me, not yet.”