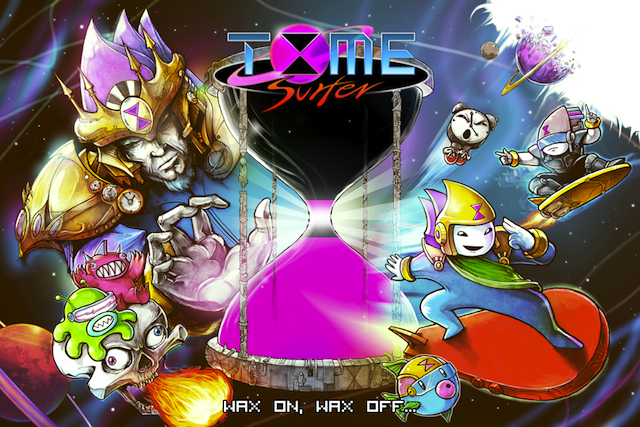 The word on the street is that Time Surfer is great. I know this because when I tell people I’m playing it, they usually respond with, “I hear that’s great!” And Time Surfer, an iPhone game about, funnily enough, surfing through time, IS great. It is that game, the mobile distraction that, if you give it half a minute of attention, will have pernicious effects on your productivity, on your leisure reading, on your pilates routine.

Jeff Greenaway, a simpatico, extremely chill dude from Melbourne, is the creative force at Kumobius Games, the startup behind our favorite endless surfer. He does the art and the design, while his brother Tom and Ivan Neeson do the code. We chatted with Jeff to find out how they did it.

Kill Screen: How did you get into game development?

James Greenaway: I started making games when I was younger than ten. Maybe seven or eight. I made these games with the shoot-em-up construction kit for Commodore Amiga, which was for making top-down shooters. I was obsessed with Sonic the Hedgehog and I was trying to make top-down Sonic games, if that makes any sense.

What did you do before making games?

I was a freelance illustrator, doing zany Japanese-inspired artwork. Red Bull was a client for awhile. I remixed the Red Bull logo one time. A lot of other gigs would be clothing labels. I had a lot of opportunities to do my own thing. But I always intended to make games.

The last three months were very intense. We have a small office, a small room. It’s almost claustrophobic. It’s easier to have an argument, but it’s also much easier to come back from an argument like nothing happened. That’s just the nature of working intensely on game.

Did you ever reach a point when working on the game where you’d been doing it for so long that you couldn’t tell whether if it was good or not?

Absolutely. I think it’s natural to have that kind of doubt. While you’re working on a game, you playtest it, you show it to people as much as you can, but it’s very hard to know, you know, how valuable their feedback is. Once you keep playing it over and over again, it’s really not much fun to play. That becomes terrifying. You go, “I’m so bored of this.” It’s difficult to maintain confidence. You have to develop as much of it as quickly as you can, and listen to other people.

I’m holding off from putting myself at the top of the leader boards just to see how other people do. It’s quite possible to keep playing indefinitely. That was definitely a design choice. We wanted to make an infinite game that never became impossible.

Do you have any advice to help me improve my score?

When people first start, they play it just like Tiny Wings, and when they die or hit something bad, they rewind. The real mastery of the game is when you start using your rewind all the time to subtly adjust your trajectory.