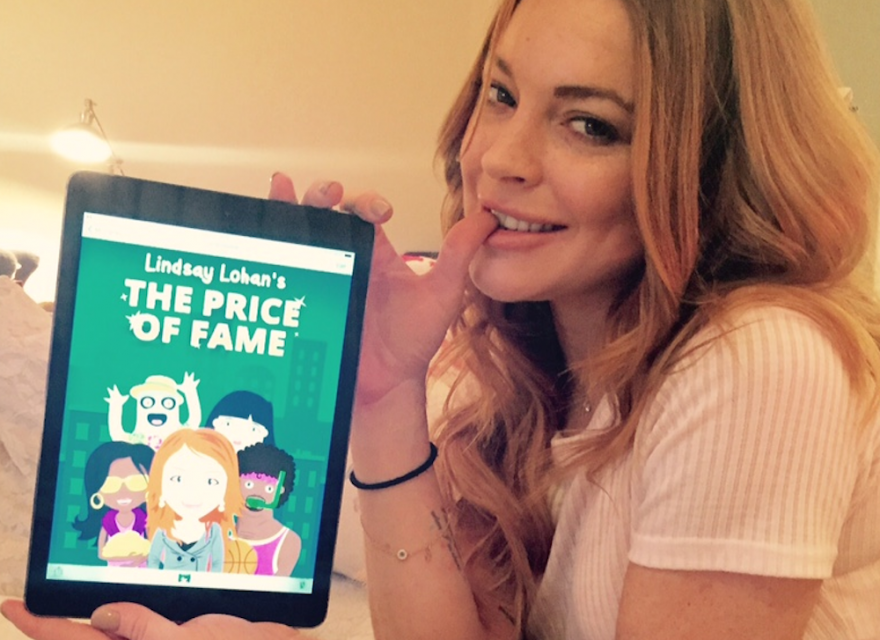 A year ago, the words “Lindsay Lohan’s videogame” would most likely have surfaced out of some horrible acid dream. Today, it is real. Painfully, absurdly real.

The Price of Fame moonlights as the edgy, self-deprecating version of Kim Kardashian: Hollywood. Like Kim’s game, The Price of Fame begins with Lindsay taking interest in you, a nameless normie, for no good reason other than perhaps justifying a personal revenue of $85 million from a freemium game. Unlike Mrs. West’s game, however, Lindsay’s forgoes any sort of fun role-playing systems to instead bank on the currency of ironic commentary.

You spend most of your time in LiLo’s game swiping up frantically with your finger—to the despair of your delicate wrists—and watch the number count of your fans go up accordingly. Why are you famous? LOL LiLo does not waste her time answering your irrelevant questions. Instead, you use the coins earned from fans (while also giggling at the image of people chucking quarters at celebrities IRL to show affection) in order to pay for publicity-related activities, which in turn earns you more fans at a higher rate, which then allows you to fund more activities, which then gives you more fans—and, well, you get the freemium hell loop that ensues.

The Price of Fame, as evidenced from the title, oozes with a sarcasm that hopes to comes off as “against-the-grain” criticism on the fantasy of becoming a celebrity. This is the ugly side of notoriety, the game says, to which a reasonable response would be, Yes, which is why we only aspire toward fame in games rather than real life.

Exceptions and avoidances like these make the self-aware humor fall flat pretty fast.

Among the categories of crap you can buy for cheap publicity includes a sex tape (friendly shout out to Kim’s humble beginnings), an elevator fight, and dancing on treadmills (a more genuine shout out to the game’s co-celebrity, Andy Ross, a guitarist from OKGo). Another category, entitled “Conspicuous Consumption,” features all sorts of attention-seeking consumables (like the paleo diet, butt cheek implants, and designer babies), with one notable exception: alcohol and drugs.

Exceptions and avoidances like these make the self-aware humor, though on-point at times, fall flat pretty fast. There’s plenty of “edge” while poking fun at others, but that sharp wit turns into a flaccid gag the minute Lohan herself becomes the center of the game’s attention. What’s more, after a very publicized lawsuit against RockStar Games for “stealing her likeness” in GTA V, the option to hire a “Rock Star Programmer” to include amongst your entourage just seems like it’s in poor taste. Not only does it now appear that the lawsuit was a meta-narrative way to put Lohan on the map for both games journalists and players alike, but it actually kind of worked.

Obviously “class” isn’t the first word we’ve come to associate with Lindsay Lohan. But the notable lack of references to her own pricey crawl to stardom is equivalent to the subject of a roast getting upset about a joke that made him or her look bad. Isn’t taking shots at your personal life in stride kind of the point of the whole thing?

But these avoidances aren’t the only aspect of The Price of Fame that keep most of its jokes from landing. Space Inch, the company that created the game on Lohan’s behalf, brings little to no self-awareness while employing all of freemium’s most hated annoyances either. One option, which allows you to read an article from the New York Times about fame in order to get 50% more fans, hints at the Lindsay Lohan parody game that could have been. But sadly, it’s the only notable change to the format.

Yet, this game was not a bad idea. There’s promise in the concept, and Lohan is one of the few celebs who could get away with this kind of stunt. But the execution lacks commitment, and Lohan as a character disappears after the first ten minutes of playing. Her avatar—whose shiny red mane recalls a Mean Girls version of LiLo, with a bright career as an adult actress ahead of her while still fresh off the success of Parent Trap—encapsulates the glossing over that renders this a groundless satire.

On the bright side, it is becoming clear that more and more celebrities are comfortable attaching their names and public personas to the world of games. Presumably, this indicates that the medium has lost some of its toxicity in mainstream culture. But now, it appears the newest hurdle is getting to a point where games act as the vehicle for the joke, rather than part of the punch line itself.