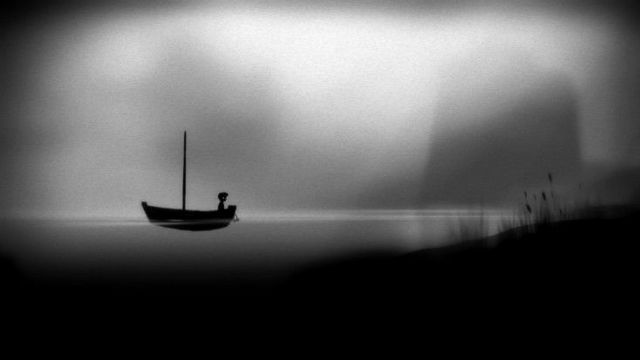 Three years late to the party, LIMBO has arrived on iOS, exactly as you remember it. The oversized spider legs that creep up from behind are still creepy. And the bear-traps and buzz saws drill on with so much dreadful indifference. The rickety construction projects, which lie on the far side of a dark forest of unhappy Dutch fairy-tales, bear some resemblance to a Nine Inch Nails video. Meat dangles from a wire. Some pudgy kids get hanged.

I know what you’re thinking. This is all sounding very Tim Burton. LIMBO has what I call an evil teddy bear vibe, like Edgar Allen Poe writing Archie Comics. In reviewing it, it’s hard not to picture myself as a semi-enthused Hot Topic associate who is trying to sell you on a pleather skirt: Sorry, it only comes in black. But did you see this adorable matching pink skull hair clip? Trust me, it looks great on you!

Thematically, I’ve never been a fan of LIMBO. That said, it’s a game I happen to, if not love, respect and sufficiently like, putting it in the same camp with Pan’s Labyrinth and music by The Knife. Though I appreciate the artistry—and this may sound superficial but—the aesthetic choices just don’t jive for me. There’s simply no better way to describe LIMBO than as an oppressive, bleak, and darkly-comic penny dreadful; one where a Christopher Robin-type unwittingly jumps to his grisly death time and again. Though I like the game, honestly I do, the section of my brain that has a wee bit of culture has to ask: Seriously?

This sort of cognitive dissonance happens more often than you’d think. Speaking for those of us who continue to play games into our post-college careers, and I take it that’s a healthy portion of those reading, we put up with a lot when entertaining video games—candy-coated wonderlands and gore-for-the-splash-of-it, things we probably wouldn’t stomach in other mediums. For my sanity and everyone’s, I must try to get to the bottom of this super-cute ultra-violence fetish once and for all.

I must try to get to the bottom of this super-cute ultra-violence fetish once and for all.

It’s no secret that the sophisticated gaming experiences we know and love are often presented as anything but. Many games are marinated in cuteness. (Consider how the majority of Nintendo’s adorable representatives make perfect plush dolls, for instance.) Many more, in blood. LIMBO is different because it does both, as if going through an awkward teenage phase, wanted to appear grizzled, but covered in peach-fuzz.

This marriage of low fantasy and high infant mortality has common ground with Grimms’ Fairy Tales, but it still strikes me as kid’s stuff. Even the name LIMBO—which references both a hellish waiting room in the afterlife, and a festive party game hosted by Buster Poindexter when he’s feelin’ hot hot hot—brings to mind two distant extremes that give me pause: it’s either over-the-top happy fun time, or there’s gruesome dead things. (The same point can be made with the developer’s name: Playdead. Play. Dead. It’s the first important event of our lives juxtaposed with the final and most decrepit one.)

That said, I’ve now played through LIMBO. Twice. Going on my third. And of my own accord. This fact alone should speak to the quality of the product that Playdead has put together. You’d be hard-pressed to find a game critic who dismisses LIMBO, including this one. If you haven’t played it, you probably should, even if the mortician-kid attitude is a turn-off. There’s good reason why it’s garnered rave reviews, won a high-school trophy case worth of awards, and sold in droves. It’s a great game.

To the developer’s credit, the pacing is superb, the shades of black are pitch-perfect, and the art direction is highbrow, making distinctive use of blur effect and grain-filters. The moonlight as it bends and breaks through the trees is dazzling—some of the most impressive lighting I’ve seen in a game.

The game is brilliant in spite of itself.

But cute things getting slaughtered is a means to an end. It creates the desired effect, which is to keep me unnerved. This allows the designer to engage the player in a game of cat and mouse; to lead him through incredible moments when every step of a puzzle climaxes in death by bear-trap. It’s misery at its finest. The game is brilliant in spite of itself.

I find it peculiar how a game like LIMBO, which places so much emphasis on dark panache, and then splatters itself with internal bodily fluid, can captivate even someone who’s not that into the operatics. Maybe that’s the lesson LIMBO has for offer. It’s like what your mother used to say, about beauty being only skin deep and it’s what’s on the inside that counts.

Still, I’d be fine with it if more games that were beautiful on the inside weren’t so cute and filled with dead things.