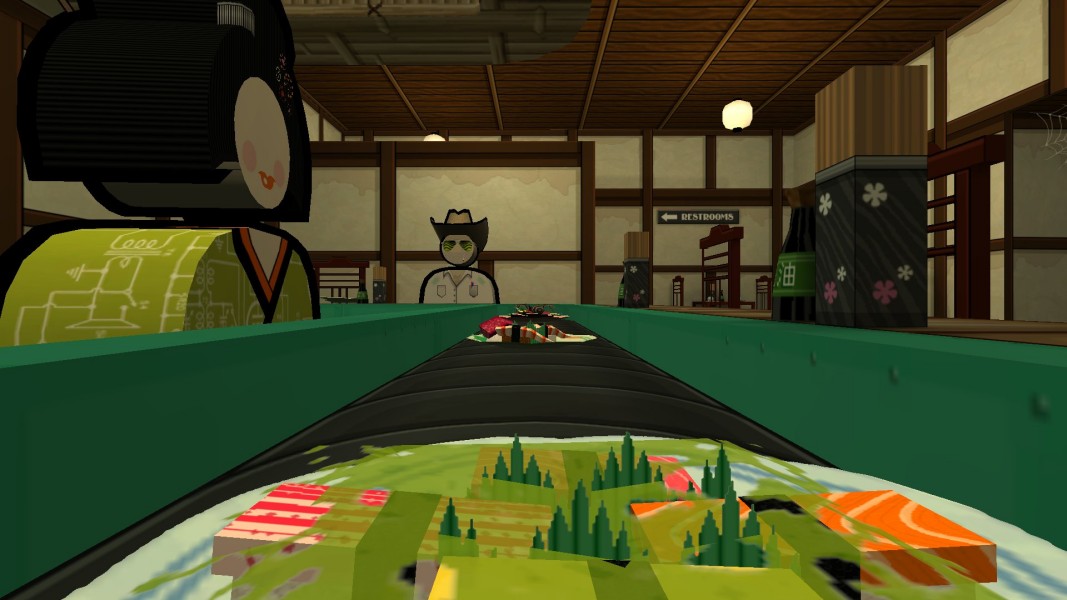 I had not heard the name Loaded Weapon in some time. It was one of those films, like Meteor Man, Short Circuit and *batteries not included, that Toronto’s City TV would just play ad nauseam. But there it was again, about a year ago, numbered off by Luis Hernandez in the back of a west-end bar as he recounted cinema of that particular, goofy type: Naked Gun, Hot Shots!, Airplane!, Top Secret!, UHF, a lot of Mel Brooks. He wanted to know if he was overlooking anything, so I tossed in Alex Winters’ gnarly 90s gross-out Freaked. This was all research, Hernandez said, for a game, somehow.

It’s taken awhile, but now I know why Hernandez subjected himself to the gag-slog. His new game, a swanky spy adventure called Jazzpunk, hopes to take “comedy game” out of the lexicon of bad ideas, alongside “marshmallow vodka,” “rap rock” and “english degree.”

Jazzpunk is set in a world of slapstick cartoon logic and bright Tito Puente aesthetics. There is no vantage point or puzzle to be solved that doesn’t get its head bonked on the mallet end of a punchline. To clear some embassy workers, you use your gangly, John K-style finger to move the wall clock’s hands to their lunch break. One quest has you disrupting a movie theater with thrown popcorn and cigar smoke, another fending back pizza people with the appropriate cutter. It’s probably the first game that has ever let you photocopy your ass and throw breadcrumbs into a koi pond (but not at the same time, unfortunately).

“It was a really scary decision,” says Hernandez, “accepting to make a comedy game, which is a taboo thing to even say out loud, but once doing it we realized just how new it was, in a way we hadn’t quite seen before, that makes it a lot of fun to work on. All of a sudden you get to be, um, I don’t know, name a famous explorer. Magellan? Marco Polo? Whatever. Whoever. You get to be one of the first people to see something like this.”

Originally, Jazzpunk was a noir-ish puzzle platformer, simpler, and lacking excitement to both Hernandez and co-developer Jess Brouse, which is why the project dragged its heels for a number of years. Eventually, Luis and Jess began slipping weird gags into the game to make it more sprightly, just to get each other laughing to lift their own spirit. The jokes, originally occurring around every ten minutes, became their favourite part, now occurring almost every second.

This made the development pick up, but it’s also unexplored turf. There were no games to cite, no learnable successes, because frankly Gex sucks.

“Funny how I forgot about Gex,” says Hernandez. “Apologies to its creators. Gex isn’t really funny, but he’s saying these one-liners the whole time in the same way Portal tells you a joke, rather than let you perform one. That can work the first time around, but if you go back and play it, you’ll know all of the schticks. It won’t do anything new, it’s just a soliloquy.”

Now, first off: There are funny games. Nobody is getting called a simpleton for gut-busting at Portal, Blood Dragon or The Stanley Parable. But those games whispered jokes into your ear while playing, and even so, they’re the anomalies. Modern playthroughs of Gex or Clay Fighter will bring you more groans than heehaws.

Hernandez said the willingness to laugh at the dumbest shit imaginable is the key lesson from his Zucker studies.

Which is what brought Luis to the non-game sources, or, rather, brought him back to them. Goofball comedy was an enjoyable and familiar space to Hernandez, having grown up on MAD Magazine and Leslie Nielsen. He loves the dedicated absurdity of these works. Talking to me, he began melting over a throwaway joke from Top Secret! where a train and its station reverse roles, adoring how much money and labour must have gone into three seconds of sheer stupidity. Filmed humour doesn’t translate to player agency, which explains some of why we’ve yet to see it successfully manifest, but Hernandez said the willingness to laugh at the dumbest shit imaginable is the key lesson from his Zucker studies.

“One thing that stuck out to us is that you don’t have to be afraid of making a really, really stupid joke,” says Hernandez. “MAD Magazine or Zucker-Abrams stuff, it isn’t a holy grail, it isn’t ‘perfect.’ Not every joke is gold or infallible. There’s tons of dumb jokes, but sometimes it’s those ones that actually get you. You almost can’t believe something that obvious, or that brazen is in there. That gave us a lot of permission, I feel. If a major Hollywood studio is willing to spend money and weeks on a train station that pulls away from the train… it seems really inefficient on paper, and you respect that. Most of the time your brain won’t put something that inefficient into the realm of possibility, and films will do that, put more effort than you expect in to something, and the possibility matrix in your head wouldn’t figure that as an option.”

The time, he says, came in translating that willingness to go for broke from film to interactive media. “Taking a joke from Naked Gun and putting it in a game verbatim doesn’t work,” he says. “You start with interaction, and you work your way back from that. We used to write jokes the other way around, start with writing the joke. That doesn’t work. You can write all the jokes in the world, only a small fraction will translate into what the player can do. That was something we had to learn on our own, and took time to get good at.”

Many of the games that Hernandez respects are titles that draw in aesthetics from media outside its own medium, like Rez or Jet Set Radio. His last experiment was translating the droning wall of doom metal into an interactive journey. Rather than the lineage of bad comedy games, these are the parents of Jazzpunk: the games that reach far outside of games and the films that leave him laughing.

That’s a specific kind of funny, and it’s a specific blend of quick-wit idiocy—visually, cunningly, punningly, and so on. And it may have finally been brought to the game world via Jazzpunk. For the many fans who had grown up with this brand of humor, it’s the dawning of a bold new age. Sorry, Gex.