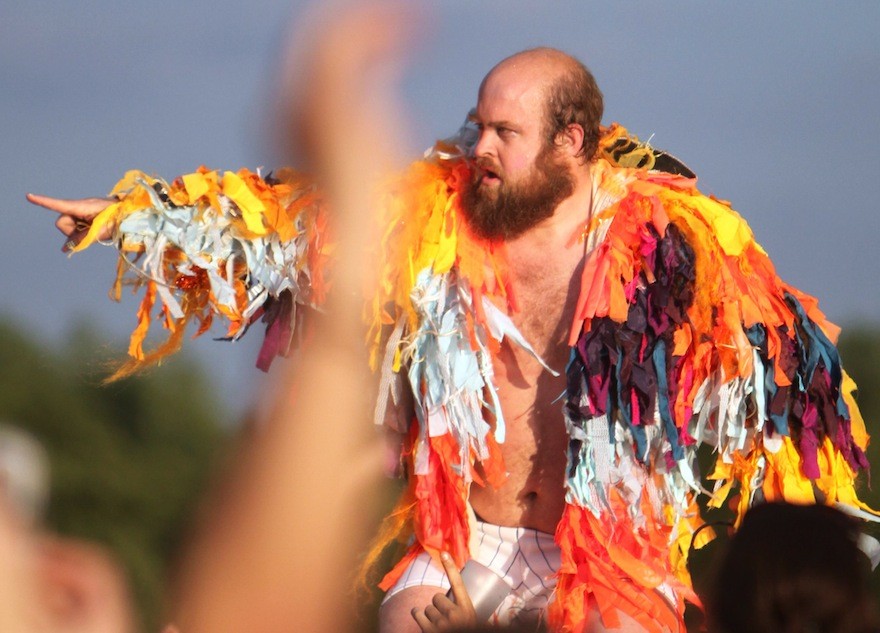 “I’ve got a lot of monsters on my mind,” Tim Harrington tells me over the phone, and I believe it. The bearish, heavy-bearded singer for Les Savy Fav, the hardcore indie rock band from Brooklyn, has sketchpads full of over 900 demented, awesome-looking illustrations he’s sketched for Beowulf the Board Game. It’s far more than the dev team at King Post will need to vilify the cards, board, and lore of their upcoming tabletop game about Scandinavian epic poetry, now on Kickstarter. But once you get in a serious monster-drawing mood, you tend to take things to the extreme.

What drew you to doing these obscene illustrations for the Beowulf board game?

The idea of making your own weird board game about a piece of literature brought two fetishistic, obsessive things to me. I was totally enthralled watching the team talk about all the complicated minutia of game weighting. They also make all these medieval Scandinavian puns while pounding beers and playing a cool board game.

Some of your illustrations look totally unlike what I imagined Beowulf to look like in 11th grade. Why is your Grendel so different?

Grendel is a funny one. It’s supposed to be a dragon, but that’s kind of lame. The thing is we know Grendel is covered in scales—it’s one of the few details in the text that they actually tell you—which sort of leads you to thinking he’s a dragon. But I’m way more into humanoid monsters. My Grendel is kind of a furless bear with a weird lizard fish-face.

The thing about Grendel that is cooler than a dragon is that he’s the descendant of Cain. He’s just this miserable, unhappy, angry creature. My Grendel is a little bitter, idealistically misunderstood outcast. So a yucky bear is good, but then I have a couple of Sasquatch type Grendels too.

Would your Grendel make a good tattoo?

One alternate Grendel I’m working on is like a baboon with naked mole-rat skin and a turkey’s neck and snapping turtle’s head. It looks a lot like the illustrations I did for our album Let’s Stay Friends. That would make an okay tattoo.

How into games are you, outside of Beowulf?

Games are a little foreign and exotic to me. I was obsessed with wanting to play Dungeons and Dragons as a kid, but I only had two sisters and none of my friends were interested. When I was in 6th grade, my mom had a teenage boy come babysit for us, and part of the babysitting rule was that he was going to play D&D with me. But instead he just ignored me and told me to leave him alone and fell asleep. I never got to play D&D.

In one of my proudest pieces of nerd history, I ended up playing D&D totally by myself. It’s really a serious recipe for cheating. I did really well in my missions. You know, I mostly like to draw castles and properties and trap doors on graph paper, and roll good characters, so I did that by myself.

Do you and the band ever have board game night?

With the band, I am somewhere between constantly and occasionally harrying the dudes into playing D&D. “We have these long 8 hour van rides.” But I couldn’t convince them. Now that I have my own sons I plan to make them play D&D with me.

You’re making your kids live the board gaming childhood you never had.

Exactly. That’s what it’s all about.

Have you ever tried a MMO?

I was really excited to play World of Warcraft. This was going to be my D&D moment. I don’t need my friends. I can do it with my electronic computer friends. I chose a cleric paladin for my character. You’re basically the medic with bandaids. I did it because it’s the character no one wants to be, and I figured I’d be really appealing for people who wanted to go on adventure missions with me.

And I never made a single friend. The little elf people would run right past me. I would type as fast as I can: “Hey, do you wanna.. go on a….” And they never responded. I was a nerd inside World of Warcraft. But whatever. I can take it.