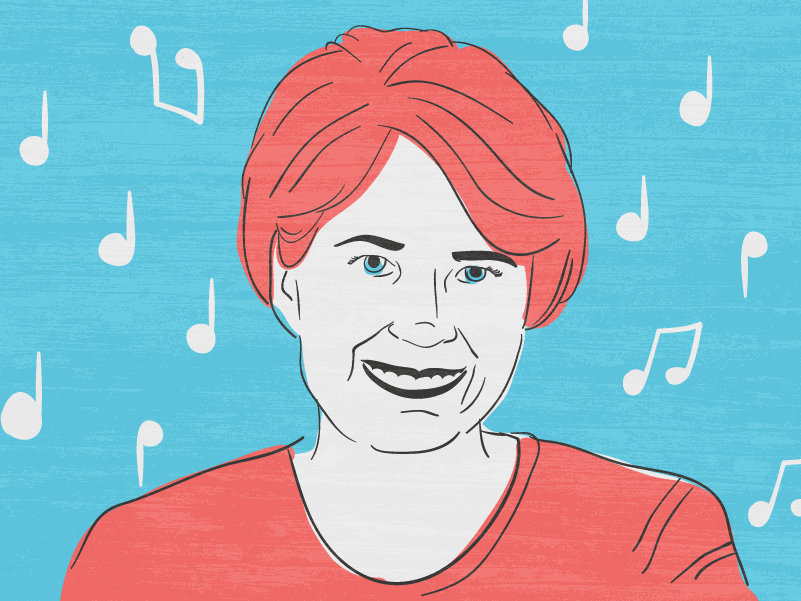 This post was written as part of our collaboration with Minnesota Public Radio.

In addition to the six years she’s spent as an on-air host of Classical Minnesota Public Radio, Emily Reese began Top Score in 2011, a podcast which allowed her to combine her love of music with her love for gaming. Since then, she’s interviewed a multitude of the most respected videogame composers, mostly from recent history. Spanning from discussions on the Baroque influences of The Unfinished Swan to the sea shanties in Assassins Creed Black Flag, Emily covers a wide breadth of game experiences and soundscapes on a weekly basis.

Your work at Top Score really seems like a labor of love. From your perspective, what about videogames (and their scores) makes it worth the blood, sweat, and tears?

I think the sheer amount of time we spend in their worlds, for one. When we go into these worlds, it’s such a long journey. I’ll put hundreds of hours into certain games. The music is such an integral part of that experience; it deserves to be talked about.

Can you remember the first time you ever felt truly affected by a score in a game?

I can actually because I was much older. I didn’t get to play games much as a kid because of an incident when I was eight. I got angry while playing my Atari, and threw the controller. My mom witnessed it and never let me play again! When I finally got a PS2 in my twenties, I mostly played GTA and racing games with licensed music. It wasn’t until I hit grad school and the PS3 that I started playing ones with lengthier original scores.

How do you think your emotional relationship to a score in a videogame differs from that of a movie?

Well the interactivity is something videogame developers will always struggle with. It’s so hard to pull off, perfecting the interaction between the players, the game, and the music. In some scores, like the first Dead Space, sound design is inextricable from the score. Or you could look at BioShock, particularly Infinite, where even the headshots are scored by Garry Schayman. I mean, that’s pretty cool, right?

I listened to you your interview with Gustavo Santaolalla about Last of Us, and it seems like there’s finally starting to be some cross over between respected film composers and videogames. How do you think that relationship between the two mediums will evolve?

One challenge I think film composers meet is that they’re just not as familiar with the concepts of how players spend their time in a game, particularly ones like Skyrim. There have been many wonderful scores by film composers—but the wandering sections tend to get boring. I don’t know how else to say it. They expect those sections to get interrupted by the main story and cinematic sequences. But, a player could easily spend the next six weeks of their life wandering around Skyrim instead, looking for a plant.

More and more people are making games, and the music will only grow alongside them.

How do you think people will look back on this particular era or moment of music in games? In terms of how it contributed to the evolution videogame scores as a whole.

I often think about the early days of film. In the beginning, the film industry just wanted to be taken seriously—which was a joke to the people in “real” drama. I see this time in games as very much like that. There’s more and more coverage on how artistic this endeavor is, to make games. How many wonderful, amazingly different experiences we can have playing them. More and more people are making games, and the music will only grow alongside them.

I would love to figure out how to get more Japanese composers on the show. It’s something we’re constantly working on and hopefully we can deliver on that in the future.

We’re also trying to get an event going in the Twin Cities, since we’re kind of isolated up here. There’s a strong artistic community, but we’re far away from everywhere else. We experimented a few weeks ago with a convention called Gamers Rhapsody and had a blast, so we’re hoping to keep going with that.

And you know, just generally getting videogame music more on the map for people! Help more and more of the community outside of videogames understand how important it is.

So who’s topping your list of best scores in 2014?

I’ll have an episode soon where I reveal the whole list. But for now I’ll say there’s one in particular that I feel has been largely ignored: Broken Age, by Peter McConnell. He scored the two different characters so thoughtfully in that game, depending on where they lived—acoustic sounds for the terrestrial girl, and electronic for the boy on a spaceship. It’s so neat.

A lot of the music Martin O’Donnell wrote for Destiny was absolutely wonderful too. They used this scale, specifically during the raids, called the lydian mixolydian scale which gives this really ethereal and space-y sound. In raids, you shoot globes of light and each one makes a tone that matches the scale. You hear it when you’re messing around in the tower, when you’re in orbit. It has this delicious connectivity between all the tracks. I also just played the expansion, and the Destiny team uses a famous symphony by Peter Tchaikovsky in those missions. Initially, you hear the opening theme from Tchaikovsky’s Symphony No. 6 (called the Pathetique), as well as when you approach a door in the second story mission (“The Seeding.”) As you move into the final battle arena, there’s an excerpt of the symphony playing over and over again. It’s a really neat touch, and it was a thrill to hear such a wonderful symphony in such a huge game.

But really everyone who worked on sound design, composition, and effects in Destiny created an excellent example of a seamless sonic world.

Final question: we’ve all had those subliminal moments where a game and its score came together in a way that stuck with us forever. Can you describe one of those moments?

There are an endless amount of those in all the Mass Effects—I’m getting goosebumps just thinking about my love scenes with Liara, because Sam Hulick did such an amazing job scoring those scenes.

Probably my favorite scene in a videogame ever is in the first Mass Effect, when Sheppard meets the Reaper for the first time and there’s this beautifully ominous music playing, low strings and basses. Everything supports this incredible speech by Sovereign which basically amounts to: “You are a grain of sand. We have done this a million times before and we will crush you and it doesn’t matter what you say because I have no emotions and don’t care how you feel about it.” It was mind blowing.