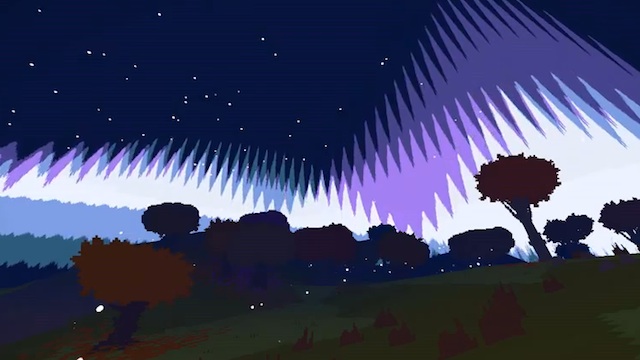 Ever since Aristotle, the debates over how to classify things have been endless. Are house cats “useful” or “tame”? Is Makemake a planet? Are crappers sculptures? Is noise music? Are games where you walk around and explore a pastoral setting while interacting with an ethereal soundscape really games?

We talked with Ed Key, one of the two creators of Proteus, a game that fits the latter description, which released this week and has caused some highly vocal people to question if this qualifies as a game.

How would you describe Proteus?

I do call it a game. It’s a weird, ambient anti-game where the music is all based on your surrounds and the things you discover. You’re exploring for the sake of it instead of being given a directive.

Why do you think there is the controversy around your game not being a game?

I hoped with Dear Esther and Journey that people had got that out of their system. It’s weird. each side of the article has a Fascist wing. On one hand, you have people vehemently defending these strange game-things. On the other, you’ve got people arguing for them not to exist. I’m almost shy about going back onto the Steam community forums for Proteus because that was full of threads saying: “buyer beware,” “don’t buy this,” “I feel ripped off.” It’s a gatekeeper mentality. There is an undercurrent there about what a game can be.

It makes the world feel richer if you don’t methodically validate and track everything.

Well, people want to push that button exactly when they’re prompted to on screen.

A lot of games are really just responding to stimulus. There’s a trend in games where people like to be, I’m generalizing terrible here, but led along. Follow that guy. “You got an achievement.” If anything gets in the way of the player, take it out. That’s why in Proteus there’s no point system or an objective like “Find all the creatures.”

If you reward people for doing these quantifiable things, it devaluing everything else. “Oh, I just found an squirrel.” It’s nice to have that on the same footing of, “I just came over a ridge and looked down on a valley and saw a sunset.” That’s an aesthetic experience. I want players to feel they have to visit all of these places and find all of these things, but I never want to ever say you’ve seen one hundred percent. It makes the world feel richer if you don’t methodically validate and track everything.

David Kanaga’s awesome soundtrack is integral to Proteus. But what other kinds of music do you listen to?

I’ve been listening to a lot of Balkan gypsy music. And a lot of stuff from Ghost Box Records, a label here in Britain. They do a lot of things that are inspired by radiophonic workshops, T.V. themes from the 70’s, and library music. I was listening to a ton of it when making Proteus. A lot of this stuff has a pastoral feeling — a feeling of a mystical relationship with the English landscape and folklore. But it’s also very technological and analog. That’s really in tune with Proteus.

And of course, Brian Eno. That’s one of my goals. To somehow get Proteus into Brian Eno’s hands.