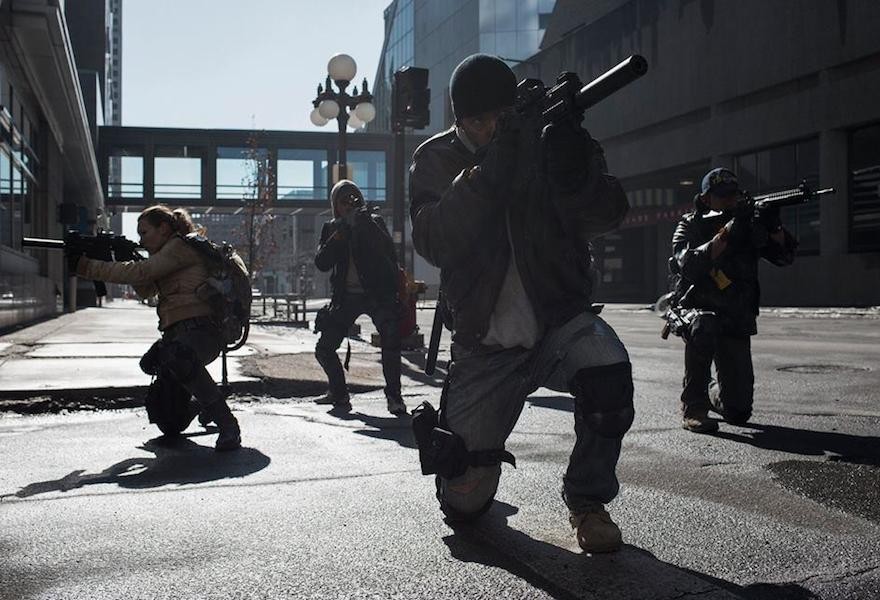 When Assassin’s Creed II was released in 2009, it was accompanied by a 35-minute live-action YouTube miniseries titled Assassin’s Creed: Lineage. Low-budget, hokey, free-to-watch, and largely peripheral to the story of Assassin’s Creed II, the miniseries’ promotional nature was clear, but the sheer length and novelty of the project gave it a sort of “official fan film” charm that made it seem at the least harmless. It wasn’t revolutionary television by any means, but the glorified cosplay nature of the project made it difficult to stay mad at it. Seven years later, after a whole generation of live-action trailers, a Prince of Persia movie, and an upcoming Assassin’s Creed feature film, the same trick isn’t nearly as cute.

Released on January 19th to Amazon Prime subscribers, Tom Clancy’s The Division: Agent Origins is a 30-minute prelude to the upcoming game The Division that spends about five minutes setting up the game and 25 minutes patting its audience on the back.

Wrapped in J.J. Abrams’ “mystery box” concept, Agent Origins strives hard not to spoil anything about the soon to release game upon which it is based. The most we learn is that it’s about a group of secret government operatives called the Division who are trying to restore order to New York City in the wake of a virus attack by an unknown, gas-mask wearing faction. We already knew this. But what works for a two minute Star Wars trailer doesn’t translate over to a 30-minute miniature movie. While it is spoiler free, most of the short fails to expand on the premise introduced in its opening, leaving about 80 percent of its content as contextless filler.

Compare this with Assassin’s Creed: Lineage, which follows Giovanni Auditore (father of game protagonist Ezio Auditore) as he unravels the Borgia conspiracy his son would later deal with in Assassin’s Creed II, and sets up the circumstances that lead to his capture in the beginning of the game. Agent Origins feels noticeably lighter. While Lineage’s plot still doesn’t spoil the game, it manages to tell a clear, self-contained story of its own that follows a well-defined lead character, and is therefore satisfying on its own accord.

Meanwhile, characters in Agent Origins are loosely defined. If this short, as the title implies, is supposed to tell me who these people are, it gives me little reason to care about them or understanding of how they relate to their world. Rather, each member of the Division could easily be a next door neighbor or someone equally innocuous. Which, to the short’s credit, is kind of the point.

During a brief scene towards the beginning of the short where a conspiracy theorist explains how the Division works, he makes it clear that Division members could be anyone, even himself or his buddies in the room with him. His group of friends share a very down-to-earth, jokey relationship that practically screams “This is you, audience!” at viewers. This is no accident, as Ubisoft teamed up with YouTube favorites RocketJump to help make Agent Origins. Predictably, the scene ends with one of his friends revealing herself to have been a Division member the whole time as she defends her group from looters.

This “hero all along” twist feels distinctly born out of the artifice of the role players will carry out in the game version of The Division, and it’s here that Agent Origins starts to show its more conniving nature. Despite being highly competent government agents, the members of the Division are fairly unremarkable people, carrying themselves with the casual, good-natured vibe of a group of friends shooting the shit rather than trained spec ops forces trying to save the world. They feel less like the people we’re told they are and more like supremely competent yet relatable hero costumes that players can look forward to putting on once they finally get the game. These are drop-in, drop-out superheroes made to fit the co-op, part time heroics The Division promises its players.

In short: it’s a dramafied Xbox Live. In 2005, Microsoft released an Xbox Live commercial where people are going about their day before an impromptu pretend shootout pops up around them after a single person holds someone else at pretend gunpoint. The ad was quickly pulled, but this is the same fantasy being sold by both The Division the game and Agent Origins the short. That you and all of your friends are secret badasses just waiting to be selected to save the world. This fantasy may hold value when explored through play, but when turned into a non-interactive marketing stunt, it fails to come across as anything other than Ubisoft complimenting its audience for how secretly cool they are before selling them a product that will allow them to make good on that promise. If Assassin’s Creed: Lineage felt commercial yet harmless, then Agent Origins feels manipulative in how it seeks to inflate its viewers ego all while selling their own identity back to them for a profit.

If you don’t have Amazon Prime, you can also watch the short as a series of four vignettes over on YouTube, albeit with some missing footage.