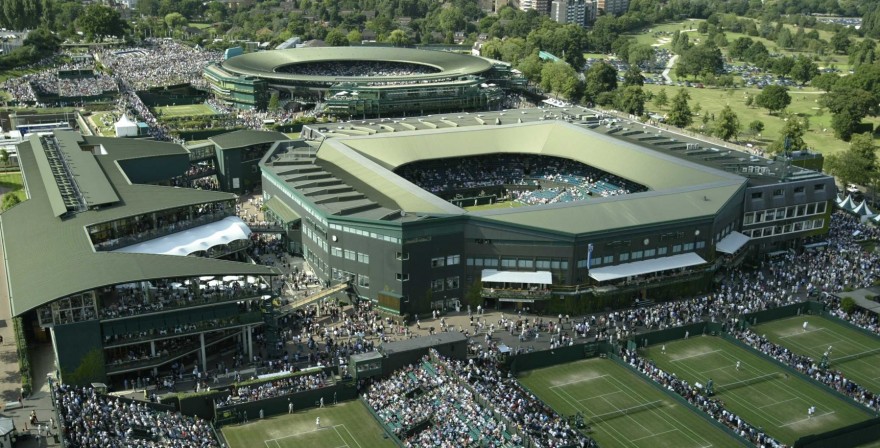 If you’re watching this year’s Wimbledon (you know, the tennis) how can you be sure that you’re feeling the right emotions at the right time? It’s alright, don’t panic, apparently this is a common problem that the event’s car sponsor Jaguar has tackled with a website that will tell you exactly how to feel, and when.

measuring the movement, energy, and heat of the crowd.

To achieve this, a selection of people attending Wimbledon this year have been wired up so that their emotions can be measured as they spectate matches. The results are being projected live onto that website as a graph, it being displayed with the tennis scores alongside it for your convenience. Within the concentric chaos of that graph you should see a jagged green line. Yeah? Good. This is the collective biometric data of all the participants. And if you want to know what that means: “Spectators are wearing technology that senses the way they feel, the way they move and the beat of their hearts,” the website explains.

You should also see that there are two other measurements being displayed in this circular graph. The purple line is deemed “Atmospheric” data, which tells us absolutely nothing by itself. But, upon further inspection, it’s explained as being sourced from sensors that have been placed around the grounds and courts, each measuring the movement, energy, and heat of the crowd. (If you are attending, do me a favor, and take 50 hot water bottles with you and scatter them around so the sensors read the crowd as overheated and about to explode.)

Finally the grey (or white?) line measures “Sociometric” data as it comes in. You’ve probably worked this one out. It’s measuring the volume of mentions that the championships are getting across social media (Twitter, Facebook, Instagram). So if you’re hashtagging your tennis hype then you’re contributing to the data machine. You animal.

The results of all this data collecting have so far been predictable. The graph tells us that people are feeling “excitement” as Wimbledon kicks off, which slowly moves to “anticipation,” and then “expectation” as the first match is about to begin. Later results, taken during the heat of a match, range from “thrill” and “amazement” to the more confusing “insight” and several bouts of “tension.” These are all emotions that you have so far missed out on. But you can tune in and start pulling faces and groaning along with the crowd right now.

Hopefully, you’ve picked up on my sarcastic tone. Isn’t this a little ridiculous? A live crowd emotion feed during a sporting event is the point we’ve reached with technology now. And what is this data actually for? Well, it’s not meant to help guide your emotions (although it certainly could). It’s a marketing effort by Jaguar, doing what they do best, which is to treat humans as cars, measuring their water levels and the heat of their head gaskets. Erm, I mean heads. But there’s a little more to it than that.

For, you see, there’s this great fear from the people who run Wimbledon and their corporate friends that sponsor it that digital technology is overriding their control of the sporting event’s coverage. Services such as Periscope allow any random crowd member to host their own livestream of the event to a potential audience of millions, and this is concerning to TV channels among other companies. In reaction to this, the All England Lawn Tennis Club, which organizes Wimbledon, has said that it’s experimenting with using digital technology itself in order to enhance the fan experience. Which is code for its attempt to wrestle back control from the public and putting it back into the hands of the people with all the money. I mean, probably … just saying.

Wimbledon’s digital boss Alexandra Willis talked to The Drum about this effort and why it’s being carried out. “It’s all about trying to show Wimbledon to a different audience. It’s about engaging with a younger generation. We wouldn’t want to get to a point where our audience is getting older and we haven’t found an entry point to them.” Note the weird phrasing in that last sentence—”an entry point to them”—it sounds like she wants to, you know, get the probes out, doesn’t it? No thanks, Alexandra.

Anyway, it’s not just Jaguar’s live crowd emotion feed and its bizarre #FeelWimbledon social media campaign fueling this effort. Wimbledon’s organizers are trying to encourage people to share photos on Facebook with the #TakeYourSeat hashtag so that it appears on a digital version of Henman Hill. It’s also using iBeacons for the first time to help guide people as to where they should queue in London’s tube system. And a partnership has also been established with IBM so that, in the near-future, an AI called “Watson” can offer an enriched Wimbledon experience to attendees.

Don’t look at me: I’m not going to tell you how you should feel about all that. You’re on your own there. At least, until someone installs your new emotion chip.