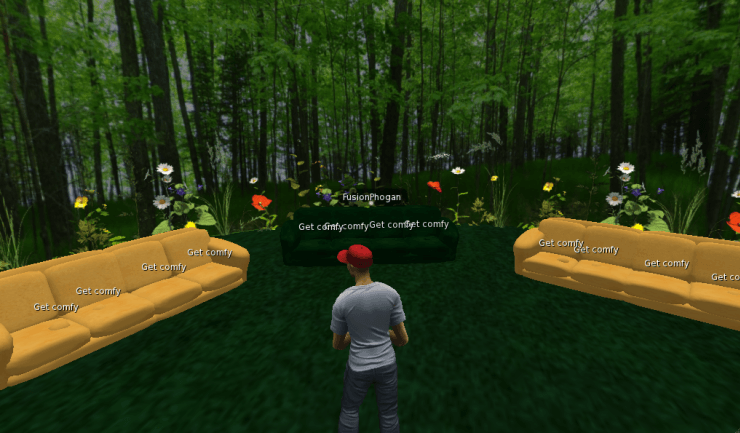 I went to college in a rolling campus up on a forested hill, where the woods served as a playground on bored Sunday evenings, and frequent late-night power outages meant sneaking into empty administrative buildings, or finally searching for that deserted amphitheater tucked away in the forest, resigned to wood rot in its abandonment.

There were days I would walk across campus and not see a single other student anywhere on the winding roads, dirt trails, or cement plazas of the school. But even then, the emptiness of these real, physical spaces rarely felt as eerie as that of the abandoned digital spaces hidden away in the numerous outdated games, empty graphical chat programs, and virtual worlds of the web.

we’re able to see the strangeness of the spaces themselves

See for yourself. Fusion’s Patrick Hogan recently dove into the empty private islands of virtual world Second Life, specifically those purchased by universities to serve as digital counterparts of their actual campuses. Of course, that was a long time ago. These spaces are now completely devoid of visitors (if they were ever used in the first place) and left to sit as digital artifacts, unchanged by time.

When these virtual worlds are vacated of human-controlled avatars and even non-playable characters, we’re able to see the strangeness of the spaces themselves: how uncomfortably wide-open and empty its rooms are, the uselessness of various virtual furnishings, maps and signs addressing no one, and oddities like the thing below, which was perhaps once some kind of inside joke, but exists now without context or explanation.

A few years ago, I also dove back into a virtual space I used to occupy in my youth: a two-dimensional graphical chat program called The Palace. Rooms weren’t necessarily bustling with life back then, but they were sometimes. When I used it actively, I wouldn’t spend too long in an empty room because I knew there would be people in other parts of The Palace that I just had to find. I’d keep clicking through.

Returning to it so many years later, I decided to linger in those empty spaces and found something similarly absurd and eerie in its flat, pre-rendered backdrops: couches and beds that didn’t make sense for the default floating emoji users would spawn as, outlines of broken links that should’ve lead out to other servers—digital dead ends in an ugly red mansion.

I even found a few rooms that I don’t recall being there before, deteriorated walls and dirty floors making them look like they’d actually aged along with the outdated software, though that is of course absurd. They were most likely added sometime after I’d left, which is actually a strange thought in itself.

Perhaps even more fascinating than the abandoned parts of these programs are the areas that are still full of life. Several active Second Life users have taken to the comments in the Fusion piece to defend the active areas of the Linden Lab-powered universe, showing off the more modernized digital spaces of the program and linking out to resources about the actual educational communities that thrive there.

With so many companies working on their own type of virtual reality hardware, I wonder if software like Second Life (which is nearly ancient in internet years) will start to go mainstream again, or if something newer and fresher will pop up in its place. I wonder too, if and when people start to move away from some virtual worlds and into others, what new kinds of digital ruins will be left in the dust for the internet archaeologists to dig up.