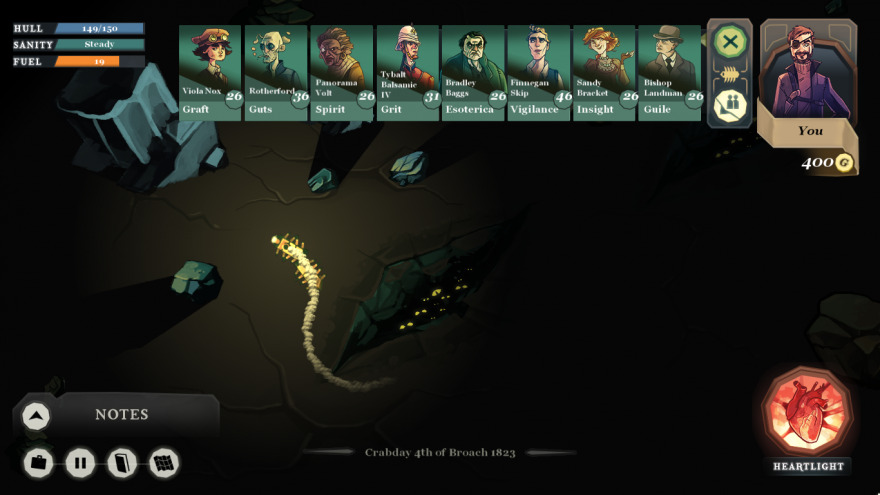 It was going fine until the Gangleman came. He arrived in the total darkness that my crew and I had been plunged into after the Heartlight had gone out. As Captain, I had made the decision to not sacrifice my own heart nor that of any of my crew to restore the light, and so we made haste towards the City of Keys, the closest refuge to our desperate position. That’s when he came, to the tune of “Gangleman, Gangleman,” a portentous poem written across the ages about his infamous acts of terror. And with that he stole one of my men in his sleep, never to be seen again.

It’s hard to express how small a fraction the Gangleman is to the total number of possibilities in A House of Many Doors, due out for Steam on February 3rd. You could play several hours of the 2D exploration RPG and not hear mention of him once. Or you could advance through one screen and know his immediate horror. If you want to crunch the numbers then, here, there are over 300,000 words in the game that delineate its branching paths and conversations. The Gangleman is about 50 of them.

If numbers don’t impress you, good, because it’s not the game’s capacity that strikes me as its best feature. That title belongs to the writing and the world it describes. A House of Many Doors takes place in a “parasite dimension” known as the House. It’s described early on in the game as a place of “endless dark rooms and locked doors. It steals people and things from other worlds.” Your task is to find the answer to three questions: What is the House’s purpose? Who built it? And how can you escape? That could take a very long time and you’ll be pressed to survive for long enough to see the quest to its end.


Of course, as there are so many secrets to tease out and terrors to discover and evade, A House of Many Doors is meant to be replayed. It’s very similar in format to Sunless Sea (2015)—which isn’t surprising given that its part of Failbetter Games’s incubation program—it having you explore a procedurally generated labyrinth as the Captain of a mechanical train with legs known as a Kinetopede. Your first mission is to hunt down the pirates that drilled the memories out of your head before they sell them on the black market. But you can forego it if you wish and travel to anywhere else you like, always at your own risk.

You might, for example, head to the City of Keys, where you can trade goods, write poetry from your experiences, recruit new crew mates, and refuel. If you do head there, you’ll be treated to one of the game’s many wonderful descriptions, such as the one of the Factory, which is “squatting vastly at the centre of the city, a bloated concrete tumour swollen to the size of a dozen castles.” It’s in these moments that the influence of China Mieville and Italo Calvino’s Invisible Cities (1972) becomes most obvious. But the exquisite architecture is only the start, as inside those bulbous walls you can unravel intricate histories, ancient secrets, and complex politics, learning more about the House and using that knowledge to become a major player among its citizens.

The bizarre and terrible is always present at the edges

Outside of the cities, when exploring the labyrinth at large, A House of Many Doors makes a firmer move towards 19th century eldritch horror, with entities like the Gangleman randomly showing up to drain your Sanity meter. The bizarre and terrible is always present at the edges as you discover new locations in search of adventure—it’s possible to find a 10-mile-high abomination made by 10 million conjoined crows, to rig an election in the city of the dead, and sell your teeth to enter the library of a weird arachnid civilization. The stories you collect across your travels can be turned into poems that help to stack up your fame, and as they are procedurally generated, you can happen across titles like “The Troglodyte Vomiting of the Mirrors,” “An Elegy on the Reluctant Hell of Grief,” and “Ode to the Strangling Toad.”

You’ll also encounter other crews in their own strange vehicles, enemies who you can sometimes try to reason with, but will probably have to fight a lot of the time. In the current beta version of the game, the combat seems to be the weakest component, partly because it wasn’t properly explained to me. Battles are played out in real-time-with-pause and involve giving instructions to your crew: you can move them around inside your train, and assign them to certain rooms, but you need to bear in mind their roles—engineers need to fix the Heartlight, gunners should be on the cannons, doctors are able to heal wounds. You also need to bear in mind the distance between your Kinetopede and the enemy’s hull, as this affects your cannon’s accuracy, and if you get close enough you can attempt to board enemy trains as they can yours.

Talking to and upgrading your crew is another key part of the game. You can talk to your top-deck crew to build a better relationship with them, finding out the places they want to travel to, which in turn fills your map with distant locations to aim towards in the hope of returning with new stories. It’s these new experiences that gain you Apprehensions, the unit that can be used to upgrade both yourself as Captain and your crew. That you become more competent in the world of A House of Many Doors by becoming more apprehensive says a lot about the kind of place it is.

Find out more about A House of Many Doors on its website. It’s coming out for Windows and Mac on Steam on February 3rd.