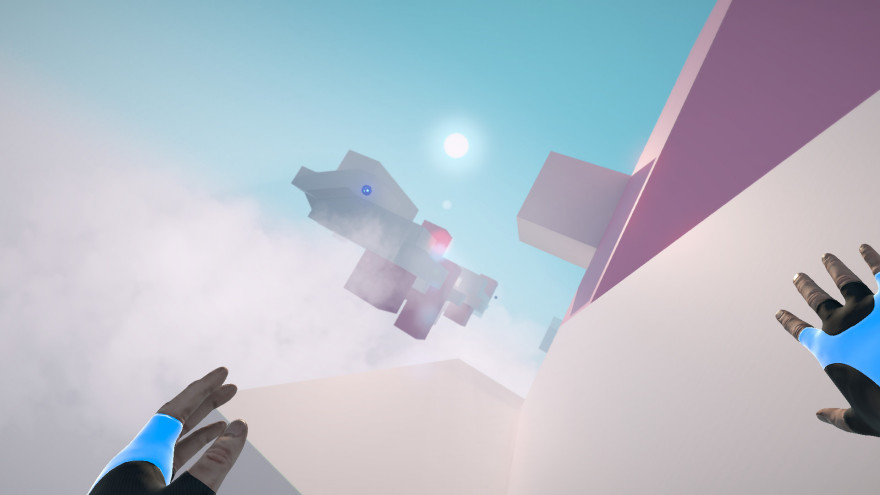 Gregor Panič has just released Welkin Road, a first-person grappling platformer for Windows, on Steam Early Access. It’s not only his debut game but also a sophisticated one that blends puzzles, freerunning, fast-paced grappling-hook maneuvers, and a “surreal skyscape.” The obvious comparison is with Mirror’s Edge (2008) in that it’s both a first-person platformer and eschews naturalism in favor of efficient design.

However, while playing it, the game’s cool, almost minty color palette, its inspired use of cloud imagery, and form-follows-function philosophy, led me to draw comparisons to the NES classic Super Mario Bros. 3 (1988). I wasn’t wrong. “Classic platformers have had a big influence on videogames in general, and as such their influence can be felt in Welkin Road as well, both directly and indirectly,” says Panič. “I think early platformers were based on a concept of putting gameplay and challenge before storytelling, and the same principle was used [here]. Furthermore, the scoring system and progression in terms of levels also draws inspiration from classic platformers.”

“make it feel almost as if the player was flying.”

A player’s success depends entirely on how well she uses the grappling hooks, which are really beams of colored light, or energy, that can be used either together or independently to achieve various distances and chained jumps. “The grappling mechanic was the first element of the game,” according to Panič. “Everything else was created around and as a result of this mechanic. For example, since the grappling and swinging is very dynamic and fast, adding parkour elements seemed like a natural evolution.”

Despite being influenced by the two-handed web-slinging of licensed games like Spider-Man 2 (2004) and Web of Shadows (2008), and by the first-person parkour of Mirror’s Edge, there’s no definite setting in the world of Welkin Road. You won’t find yourself taking on a police state or saving Mary Jane Watson from Manhattan’s latest monster of the week. “To be able to create certain tricks and puzzles, I knew I needed specific architecture that would be very difficult to base in a real-world setting. I thought that the game would be better off letting the [puzzle design] drive the creation of the architecture, rather than being limited to what exists in the real world.”

The first-time developer faced a great many challenges in realizing his vision, not the least of which was creating the art assets for the game. “Since I was working on the game on my own, and the player covers a lot of distance really quickly, it needed to be feasible for me to create a lot of geometry.” As for the use of clouds and the game’s celestial milieu? “It came about as an extension of the grappling. I wanted to make it feel almost as if the player was flying.”

Panič hopes the Early Access launch will give him an opportunity to add community-driven features such as “multiplayer racing, replay sharing, and a level editor” once the physics and level designs have been finalized. You can grab Welkin Road yourself over on Steam.