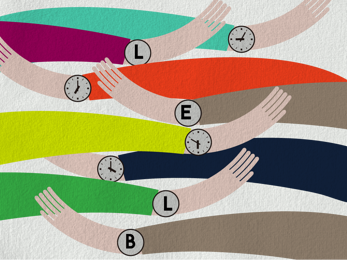 The Ear Force PX51 is a lot of headset—$296.95 worth of headset, to be precise. It is billed as an “advanced gaming audio system.” It comes with many features that are prefixed with “dual-”, which makes sense insofar as most people have two ears. All of that is a complicated way of saying the PX51 allows you to hear what is happening in a game and communicate with others, all for the princely sum of $296.95. That’s nice, I guess, but what if you wanted to play a game and talk to someone else with slightly less technological intermediation?

We’ll Meet Again, which was created by Claudia Molinari & Matteo Pozzi (aka We Are Müesli) for Milan’s Global Game Jam 2015, offers just that mix between digital gaming and direct human interaction. Two players sit facing each other, with computers in front of them. The configuration is reminiscent of the plastic board game Battle Ship. Both players have downloaded We’ll Meet Again. The first player opens “Side A,” and uses it to explain what the other player is seeing on their screen. The player with “Side B” uses these hints to select—and listen to “vinyls.” The two players trade information until they have solved the game’s five levels and reached a happy ending.

the crucial connection is human.

Whereas the PX51 exists to argue that gamers are connected by miles of cable running under oceans and through mountains, We’ll Meet Again suggests that the crucial connection is human. In fact, the two computers used in We’ll Meet Again don’t need to be connected to one another during gameplay. There is technology at play here but it is in a subordinate position. You are not being worn by an expensive “advanced gaming audio system.” Of all the human touches in We’ll Meet Again, that fact is the most reassuring.