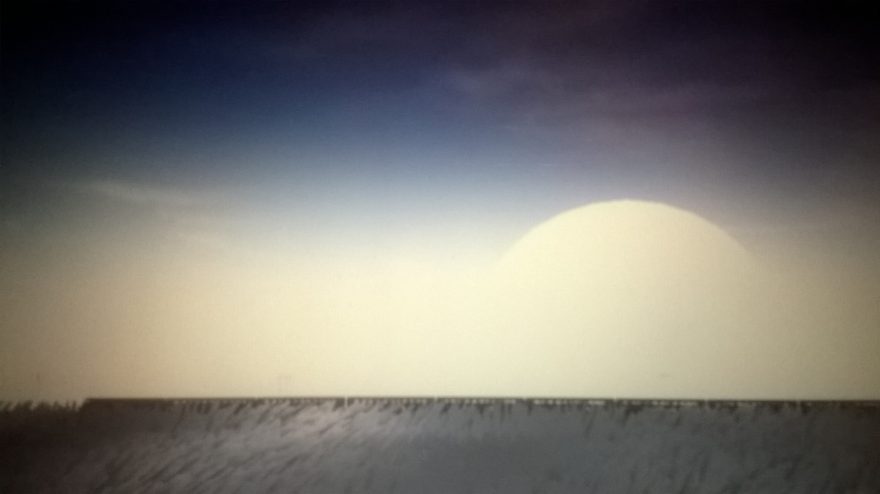 The power of the engine doesn’t matter—it is the landscape which dictates the speed of a train. Some journeys are staccato and breathless, clusters of urban interest barely spaced, laying down a beat over which the melodies of weather and light might play. Others are long drawn-out sighs, exhales as long as a country, made even slower by the occasional point of basic interest; a tree or ruin. Most waver between the two, playing out the time away from work, life, routine and rote in an almost mischievous way. Once you board a train, you leave your life behind, you will have to pick it back up at your destination.

The dust, the amber light, the metal shell of the train

It is these qualities that To West seems to play with. Pol Clarissou, creator of the meditative Orchids to Dusk (2015), designed it as an entry to itch.io’s “Mystic Western” game jam, a competition that produced a rich set of experiments, including Conor McCann’s heat-locked conversation Black Gold, and the lo-fi wanderings of Kyle Reimergartin’s Ded Zome. To West marks itself out by being barely interactive, its lone input being the almost unnoticeable movement of the camera, bound to the mouse. This is an experience that wants you to be taken away from the controls for a few minutes, to step onto its simple, silhouette train, and ride it through two days of blistering sun and two nights of wandering visions.

For me, the vast desert and warm tones of To West bring to mind the longest train journey I have ever undertaken, the 24 hours from the golden city of Jaisalmer, in the midst of India’s great Thar Desert, to the ancient heartland of New Delhi. The dust, the amber light, the metal shell of the train all stay with me, as does the profound slowness of the landscape. Sitting on the edge of an open door, watching the disc of the sun, muted to a simple graphic object by the layers of sand and dust in the warm air, I found myself slipping beneath the rhythms of crossing a desert, the featureless landscape refusing to recognize my presence, or the hyperactivity of my life—only the inhumanly slow processes of erosion, decay, displacement.

In reality, To West is not as slow as this. It cannot even begin to invoke the vastness of time that can be opened up by such a journey. Yet, in its forcible arrest of our attention, especially when placed within the hundred-clicks-per-minute context of our computers and devices, it gestures at such experiences. There is no narrative to be found in To West, no true pattern, no real meaning. All of these elements would provide some relief from the stillness which dominates this constantly scrolling canvas.

Instead, To West’s only thread is the haunting music of Hibou Blaster, filling the empty space with rich tonal shapes that shift almost imperceptibly. Placed alongside the occasional abstract visuals, which have all the over-saturated beauty of a memory-to-be, To West manages to be, even in its short and simple form, something of a journey. Like a train, it picks us up in one place and leaves us in another, and as passengers our only task is to try, impossibly, to understand what might have changed while we were away.