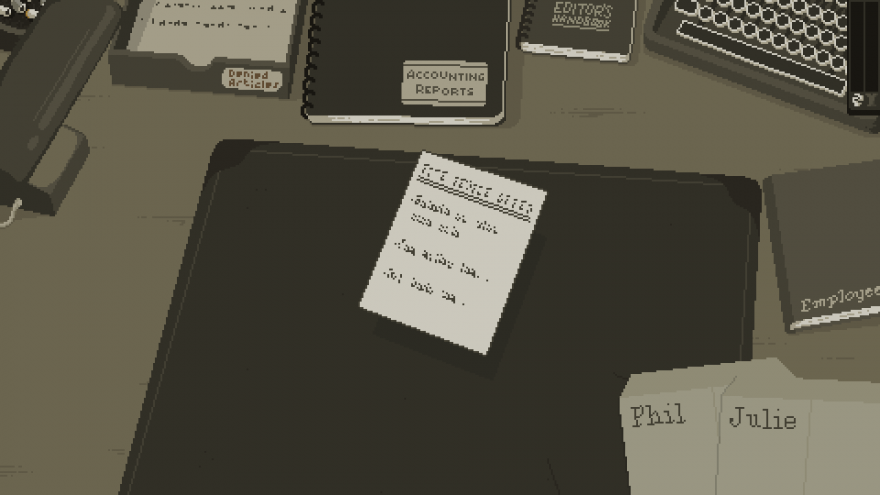 1984‘s Ministry of Truth, the Orwellian branch of government responsible for rewriting history to fit the regime’s current narrative, satirized the unsettlingly thin line between news media and propaganda. As their slogan (quoted above) states, the editorial pen wields much more power than just the reportage of current events. Journalism, no matter how “objective,” shows only one angle of the present. And at a time when that angle framed the public’s only view of the outside world, journalism shaped the perspectives of people who carried out the future, while cementing how we understood our past.

“In a time of universal deceit, telling the truth becomes a revolutionary act.”

The Westport Independent, a self-described “censorship simulator,” places that editorial power in the hands of players during a time of political unrest in the city of Westport. It’s 1948, and rising rebellions against the government lead to a new bill banning any news outlets that do not comply with the Loyalist Government Guidelines. You play as the editor in chief of an independent newspaper entering its final weeks before the ban.

As editor, you control the censorship of articles, pick headlines, and arrange the layout to tell the truth of your choosing. As with Orwell’s 1984, “in a time of universal deceit, telling the truth becomes a revolutionary act.” Will you abide by rules and force-feed your readers the government’s narrative? Or will you defy their guidelines, and print the rebellion’s perspective instead? The city, divided into class-based districts, dynamically responds to everything you print. By shaping public opinion with the stories you choose, you shape the current events that unfold. And by shaping the events, you affect the stories you can cover.

But your decisions don’t just stop at shaping the future, either. As editor, you must also decide when freedom of the press is worth risking the lives of your reporters and their families. Though you make the final call, your team of writers harbor their own opinions about what should or shouldn’t be printed. Whether you listen to them or not, your choices land your journalists on either the government’s watch list, or the rebellion’s hit list.

As the newly released trailer alludes, no matter which side of the coin you choose to print in The Wesport Independent, truth is always manufactured. As the coin flipper, you only serve to manufacture more selective truths and pointed omissions. The difference lies only in how you impact others while wielding your double-edged pen.

Originally appearing in the 72 hour game jam Ludum Dare 29, The Wesport Independent has since undergone many significant changes. However for a preview, you can play the original version through the Unity Web Player. The creators, a Swedish developer duo calling themselves Double Zero One Zero, hope to release the game on PC, Mac, Linux, Android and iOS.