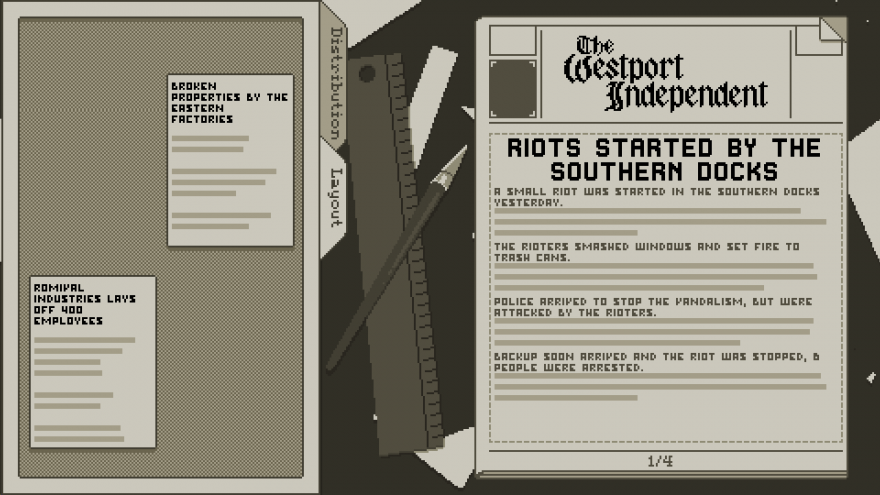 “By the skillful and sustained use of propaganda, one can make a people see even heaven as hell or an extremely wretched life as paradise.” –Adolf Hitler, Mein Kampf

The Westport Independent, a censorship simulator about the power of press, recently got a new trailer that crackles with the corruption of old timey propaganda. An announcer boasts of the Loyalist government’s soaring successes, spreading happiness to all “civilized” citizens of Westport. But by the end, the film implodes on itself, the simplistic world its propaganda spins going up in smoke along with it.

The game casts you as the editor of the last independent newspaper during a totalitarian post-war government. Using editorial tone, you can sway the public’s opinion on both the Loyalist government and the rebel group. But whichever truth you print, your actions always come with dire consequences, for both for the city and your own journalists.

The latest trailer reads like a meta-commentary on the corruptibility of media as a whole. When film rose to become the twentieth century’s first “mass medium,” governments across the world quickly learned to utilize it as a form of crowd control. The new medium proved an ideal propaganda tool, already adept at spinning spellbinding illusions of reality to a public that hardly knew how to question its messages.

Though Westport Independent explores the transformative power of the press, it also warns that truth is never absolute, especially when it comes to the messages implicit in a medium itself.

The Westport Independent is slated for a 2015 Steam release, and will be available on Windows, Mac, Linux, iOS and Android. You can follow development through Double Zero One Zero’s Twitter.