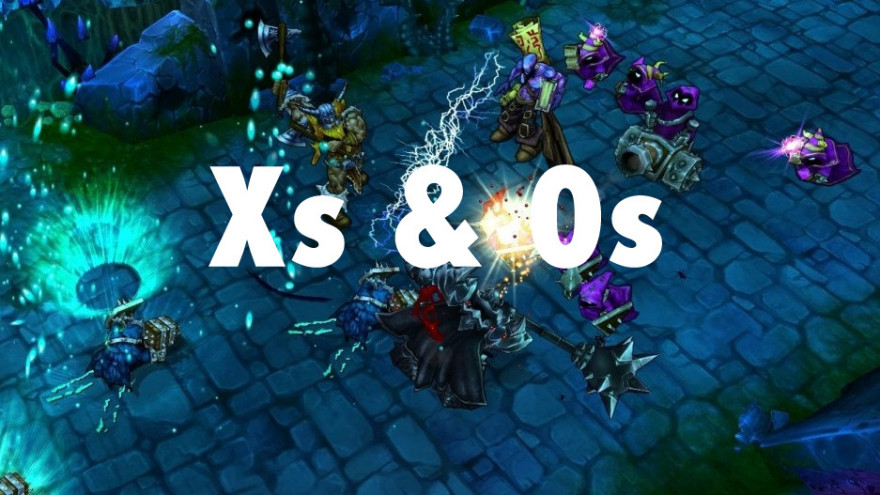 Videogames and sports are kissing cousins and are part of the same family of life known as play. With the rise of esports, the conversation about the ways that PC games can learn from the likes of football and baseball has renewed. Over the next few weeks, iQ by Intel and Kill Screen will explore how these worlds intersect, whether they know it or not.

Last Tuesday, around one in the afternoon, I spoke with a drowsy William Li at the beginning of what would be another long day of practice. Li, better known as Scarra (“There’s a slur on the R’s,” like escargot, he told me), is the captain of Team Dignitas, the third-ranked League of Legends team in North America. As we talked, I could hear him intermittently typing at a blazing speed, probably shooting an instant message to one of his housemates, probably about the upcoming regionals in Seattle. For the better part of the year, he lives with his team in a house near a Costco in Long Beach, Calif., where they train religiously.

Big money and endorsement deals are on the line.

For sports, and also esports, training can be a major drain on the facilities. This is to be expected when a team intensely focuses on the same game for 72 hours a week. As the payouts for esports tournaments have surpassed the million-dollar mark, the competition has increased drastically, and so has the amount of practice. Big money and endorsement deals are on the line. When it comes to preparing for the season, esports teams are following the steps and routines of many other professional sports leagues.

In particular, they look to the NFL. While there’s no need for training camp in esports, nor a grueling weight room routine, their schedules resemble the steady grind of the football season, week to week. Team Dignitas practices 12 hours a day, taking a break on Saturdays. The regimen includes not only playing the game, but other important sports tactics. They hold morning and afternoon meetings. They look at offensive and defensive strategies. They draw up plays on the dry-erase board. They watch a lot of tape.

Using a bot to record their scrimmages, the team analyzes four-hours worth of replays per day.

Using a bot to record their scrimmages, the team analyzes four-hours worth of replays per day. They watch it in the living room on the big-screen. Quoth Scarra, who has short black hair and speaks elliptically, “It’s the same thing that’s done in major sports, except they have a dedicated analyst that will show it to them later… People on the team have really bad memories. So, we tackle challenges straight up.”

Unlike muscle-bound linebackers, this is still very much a group of dudes living the dream of playing videogames all day. On their off days, they play Magic: The Gathering. When I wondered aloud if ramen was on the menu, he said, “It’s funny you should ask. Someone just walked past me with ramen noodles.” (Scarra balances this lifestyle by hitting the gym three times a week, where he lifts weight and runs the treadmill, “just to make sure the sedentary lifestyle doesn’t kill me within, like, two years,” he said.)

Because League of Legends is such a strategic game, the team doesn’t focus on fundamentals. There are no click-on-the-minions drills, per se.

“It’s not like I’m building muscles. Maybe muscles in my brain,” said Scarra. “I can’t repeatedly hit a baseball a thousand times a day. Even then, at a high enough level, would that be better than watching replays?”

At least his point holds true for pro football, where every guy on the roster is athletically gifted, and intelligence for the game tends to trump natural ability (with the exception of really tall receivers, maybe). “Playing more of the same game isn’t going to help you,” he said.

For Scarra and his five-man crew, the obstacle isn’t physical stamina, but mental wear and tear. Yet, they have no special rituals to keep them from burning out. They don’t participate in mental exercises, like meditation, or go to yoga class. As for stress, each person copes with it the best they can. Of yet, they haven’t visited a spa for massage. “The only thing I’ve considered is getting a maid because it gets pretty messy around here,” Scarra said.

The obstacle isn’t physical stamina, but mental wear and tear.

While the team doesn’t employ a psychologist, that may change. For the time being, the game plan is to study hard and dog whoever’s zoning out.

“It’s all mental. The strategy is more important than anything. We really need people to be tuned in,” he said weary of answering my questions, sounding drained. It was time for another exhausting day of play, or thinking about playing, anyway.