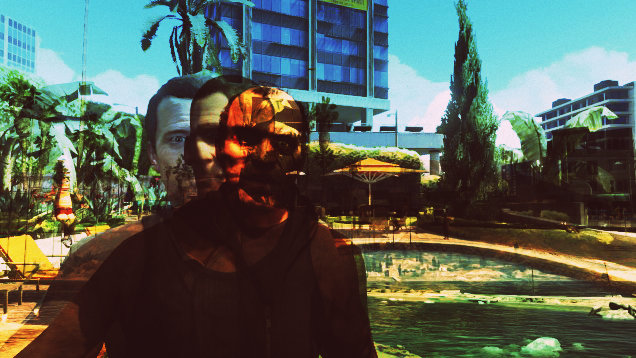 Is it nature or nurture that makes violent people? In the Grand Theft Auto games, it’s always been both.

Developer Rockstar Games has always put players in the bloodied shoes of various gangsters and let them loose in expansive cities to wreak all sorts of recreational havoc. Grand Theft Auto V’s version of Los Angeles, Los Santos, is the most ambitious environment ever rendered. It’s also the most expensive. Rockstar boasted that the game cost a record-breaking $250 million (yielding a billion in sales within the first 48 hours, the fastest entertainment property to reach that mark). But it raises the question: is this the best videogame environment money can buy?

In mostly problematic ways, yes. For all of GTA V‘s accomplishments (of which there are many), its desire to create a playground for violent boyhood fantasies feels at best outdated, at worst horrifying. Every step forward in savvy game design and technological achievement is marred by an equally egregious dash of misogyny, cynicism, and cruelty.

For a while, it seemed like this would be the year of the self-conscious blockbuster. BioShock: Infinite, the year’s biggest game up until GTA V, is the third in a line of moody, atmospheric shooters. The series has always had wink-y things to say about player agency, and Infinite takes a risky but ultimately failed chance to say something intelligent about violence. Like GTA V, Infinite’s centerpiece is its environment, an inspired floating utopian city called Columbia—a kind of colonial, semi-steampunk-y thing. But after the shock of that landscape wore off, players were left with nothing to do within it. Its gorgeous turn-of-the-century architecture serves as mere arenas where you must murder everyone in the room to make progress. At the end, the story slaps players on the wrist for their violent actions, which feels disingenuous given that that was the only option to open the many doors to get there.

Its desire to create a playground for violent boyhood fantasies feels at best outdated, at worst horrifying.

Naughty Dog’s equally high-profile The Last of Us featured a similar—if slightly more successful—morality lesson. Set in a post-apocalyptic U.S., The Last of Us encourages players to avoid unnecessary fights with monsters and other humans by limiting ammunition and resources. Every bullet matters, so you’re better off saving them for emergencies. Also, the violence is so deliberately horrifying that you’ll want to avoid it just so you don’t have to see it. The Last of Us’s biggest failing is not committing to this idea more fully. It can’t help but succumb to several turret scenes and an escalating, non-optional shootout finale.

Effectively or not, BioShock: Infinite and The Last of Us want to say something smart about violence. Grand Theft Auto V does not. In fact, it seeks to glorify it. Committing a certain number of felonies will attract the police, but they’re so easy to outrun that the world of GTA more or less represents one where you can do whatever you want without any consequences.

This has always been GTA’s wheelhouse, though. Those familiar with the previous games will find an experience that’s similar, just exponentially bigger. Los Santos is a full-scale rendering of Los Angeles, plus the suburbs north of the city and some huge expanses of Nevada desert, totaling to 49 square miles of interactive geography. Every time I played the game, I was amazed by the size and detail of the world. Few games can deliver an experience more satisfying than driving up the coast and putting on your favorite radio station (the music, as in the other GTA games, remains wonderful).

If there’s an equivalent of the uncanny valley for landscapes, Los Santos is it. There’s an intricate layer of underlying systems and rules that make Los Santos feel so real. There’s one that governs how convincingly pedestrians walk, how accurate traffic patterns are, and what the weather is like. It’s impressive how real these things look and, at the same time, how much you want to break them. The game never feels right until you’re weaving through traffic on the wrong side of the road, skidding out, and accidentally running people over.

But while the world and scope have grown, the game has barely matured. That is to say, its universe still feels immature. All the Grand Theft Autos are satirical portraits of the American Dream, one in which criminals embody the pull-yourself-up-by-the-bootstraps attitude better than the lawful world. (One of three characters, Trevor, refers to his meth production as one of the last honest American businesses.) Still, this perspective feels dated and juvenile, largely because the game’s sense of humor is too often obvious or tone deaf or both. The GTA vision of America is unrelentingly cynical: everyone is greedy, every motive is selfish. At one point, Michael tells Franklin he should go to college so “you can rip off anyone you want and get paid for it—it’s called capitalism.”

There are rare moments when the game actually has something to say. A controversial waterboarding sequence, for example, turns out to be a surprisingly effective lesson on the futility of torture, but these glimpses feel more like exceptions than signs of potential. For all its referential parodying, GTA V regularly calls into question its own self-awareness. For example, the game prominently satirizes smartphones and social media: there are numerous references throughout to the new iFruit smartphone and a social networking site called LifeInvader. But does Rockstar see the irony when interstitial loading screens encourage you to download the companion GTA iPhone app and link your game to your Facebook account?

But while the world and scope have grown, the game has barely matured.

It’s sad that the bolted-on satire of the phones is so aimless, because their actual in-game function can be almost sublime. Each of the three characters carries a different smartphone, loaded with an Instagram caricature called Snapmatic, allowing players to take photos throughout the game. (You can even take selfies.) This app was actually the best way to capture the beauty of Los Santos: sunsets, mountains, the ocean, all gorgeously rendered in ways never seen before by a videogame. Everything taken on Snapmatic is uploaded to Rockstar’s website, where you can see your photos along with those taken by other players.

Which is where things snap back to reality. While trying to retrieve the images for this piece, I saw the full stream of Snapmatic pics (registration through Facebook required, of course). Most were harmless, but far too many were disgusting. If they weren’t weird cleavage shots of female characters in the game, they were the bodies of murdered prostitutes. Rampant violence is one thing, but GTA V continues to trivialize violence against women as a mere function of player agency.

In his posthumous novel 2666, Roberto Bolano invents “Santa Teresa,” a Mexican factory city that is famous for its rapid economic development and its horrific crimes against women. This section, the longest of five, is titled “The Part About the Crimes.” In graphic detail, Bolano describes the brutal murder and rape of women who work in the city’s maquiladoras, and the incompetence of the police to solve any of the homicides. The effect of reading 300 pages of this is revolting, but over time, desensitizes the reader to the violence; Santa Teresa is a lawless land where crime rules. Murder is so commonplace, it’s mundane.

Santa Teresa is a thinly veiled fictitious version of Ciudad Juárez, where it is estimated that over 370 women have been murdered since 1993. Bolano is being deliberately transparent here, about as transparent as Rockstar is about Los Santos being a mirror for Los Angeles. The only difference is that Rockstar has made the violence fun.

Grand Theft Auto V represents an extremity of everything. It’s the final mega-blockbuster game for this generation of consoles, since its release was superseded by the newest versions of the Xbox and PlayStation. It makes me wonder if the future of mainstream games will be more mature, more thoughtful, as BioShock and The Last of Us have at least attempted to be. Or will we just see even larger versions of old ideas and juvenile misogyny perpetuated by even bigger budgets?

I’m leaning toward the latter. It’s funny. Maybe Grand Theft Auto’s cynicism is getting to me.

The Last of Us image via Naughty Dog